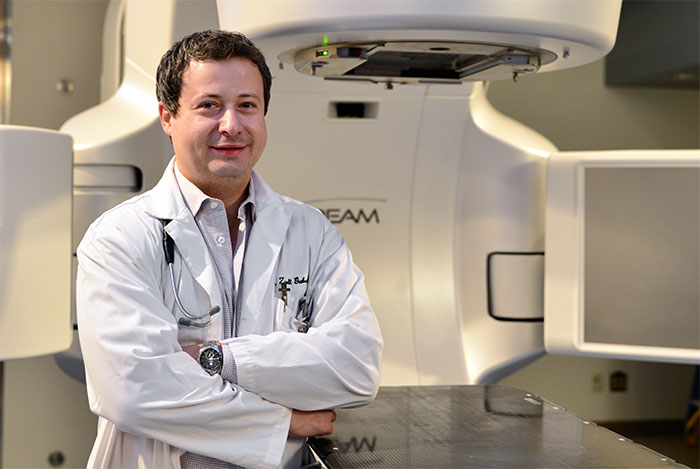 Stereotactic body radiation therapy (SBRT) delivers a higher dose of radiation over a more condensed period of time, cutting treatment duration by a third. The high-dose radiation isolates tumours in the body over a shorter course of treatment, with fewer side effects than currently experienced with conventional radiation treatment.

Prior to the introduction of SBRT, therapy for lung cancer patients often took between four to seven weeks, or upwards of 30 visits. That has since dropped to between four and five weeks and fewer visits.

The procedure was introduced at the Cross Cancer Institute in 2010, and SBRT has since become the standard treatment for men and women with inoperable lung cancer since. It’s used on patients with clinical early-stage cancer, with tumours measuring as large as seven centimetres.

The treatment has been so successful that they are looking to make room for the procedure at the Central Alberta Cancer Centre and the Jack Ady Cancer Centre in Lethbridge.

The process begins like a traditional consultation. A number of scans are taken to determine the exact location of the tumour and how much it moves with the individual’s body. A four-dimensional scan is used for the lung and liver for an even higher level of precision. A specialized robotic couch is then used to perfectly position a patient for pinpoint radiation treatment.

A main concern with traditional treatment is that patients with emphysema, or adverse chronic obstructive pulmonary disease (COPD), are not eligible for lung cancer treatment or surgery. Both health issues are common in patients with lung cancer.

But with this modern upgrading, patients with both conditions can now be treated effectively.

“Side effects are significantly less with SBRT than with conventional therapy,” says Dr. Zsolt Gabos of the Cross Cancer Institute’s radiation oncology department. Sterotactic radiation was originally invented for the treatment of tumours in the brain. But in the past decade the treatment has evolved to attack tumours in the lungs, thus adding the word “body” to the title.

Raja Mita, director of program investments at the Alberta Cancer Foundation, says one of the ultimate goals of provincial health care is to ensure that every Albertan has access to the same aid. He commended the work of Gabos and his colleagues, noting that advances in their work and research indicate that SBRT could be used to treat tumours across the body.

“This work could cement and provide the evidence to begin implementing this therapy province-wide,” says Mita.

The treatment gives new promise to difficult-to-treat localized cancers like those of the liver and spine. “Clinical studies are starting to look at treating these other sites with SBRT. With Alberta Cancer Foundation donor support, they have committed to expanding to these sites that were previously not treated,” says Gabos. “It has been very successful in lungs and we are trying to move this success to other areas.”

The therapy’s achievements have in part been due to the assistance of a number of donors across the province.

“Donors have been instrumental in supporting enhanced care grants to fund the necessary technologies that will help move us to be able to conduct this therapy in the liver or spine, which require specialized equipment that we did not have available,” says Gabos.

With great success comes great expectation. Gabos cautions that not all cancer patients are a right fit to receive SBRT. “Treatments are part of an individualized treatment plan, and there are many factors that go into these decisions,” he says. “[For] something like the liver, location matters, and it really is sort of personalized treatment for the specific scenario. People wish to know if they are eligible, but cancer is so diverse. This has the chance to treat many patients, but to be able to decide who is appropriate is a multi-step process.”

Gabos says the success rate of controlling the localized disease in lung cancer patients is 90 per cent. Although he is hesitant to assume that the success rate would transfer to other parts of the body, he remains optimistic about the evolution of SBRT.

“We are confident. We do not know if it can be as high, but we are hoping to see considerably better results than conventional radiation therapy,” he says.

“Long-term improvements will depend on the success of the clinical trials, but hopefully similar to what we have seen in the lungs. With SBRT, more lung cancer patients are living longer and we are curing more lung cancers compared to conventional therapy,” he continues.

Trials for new sites could begin as early as 2015, with liver patients among the first to try it.

Rage in the Machine