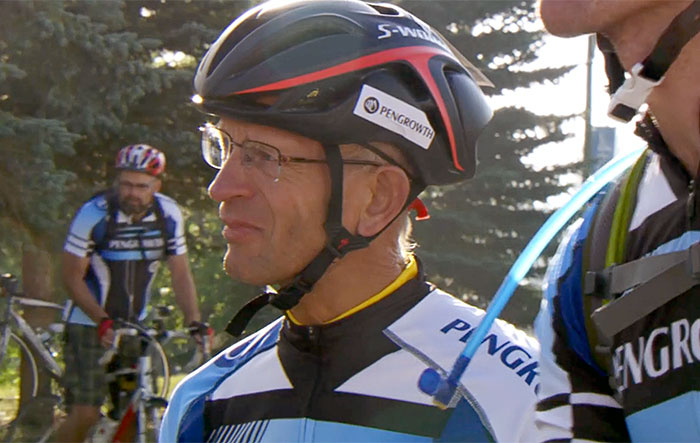 FAST TRACK: Emrie Strohschein was among Pengrowth’s 33 team members in the Enbridge Ride to Conquer Cancer which raised nearly $400,000.

Pengrowth Energy Corporation’s team, Heels to Wheels, raised the fourth-highest amount of all teams in its inaugural ride in August 2014’s Enbridge Ride to Conquer Cancer – and its members have big plans for doing even better in 2015.

Each member of the 33-person-strong team had to raise a minimum $2,500, but Pengrowth went well beyond that benchmark, raising more than $12,000 per team member.

Under the leadership of Derek Evans, Pengrowth’s president and CEO, the team of 33 members raised $391,000 and has its sights set for $500,000 in 2015, with a stretch goal of $600,000 and a team of 50 riders entered. They already have 43 for the 2015 instalment, thanks to the addition of some senior-level personnel like Pengrowth COO Marlon McDougall.

According to Cloete Uys, manager of information systems infrastructure – and Evans’ ride co-captain – the event which benefits the Alberta Cancer Foundation, touches so many people personally.

One of those is, Emrie Strohschein, plant control room operator who works out of Olds, Alberta. In September of 2013, his wife was diagnosed with colon and liver cancer and died less than four weeks later. A day before she died, Strohschein’s younger brother was also diagnosed with colorectal cancer. “I do it in memory of my wife and in support of my brother,” Strohschein says in a video the company produced to encourage participation, noting that his goal was to merely finish the ride in good standing. He not only did, but was also the first of the Pengrowth team to cross the finish line. “Emrie, our fastest [and oldest] rider … well done!” says Uys.

And don’t think that it was an easy ride. It was a two-day event that covered 220 kilometres, starting at Calgary’s Canadian Olympic Park (COP) and ending in Okotoks about 110 kilometres away, with the option of camping overnight. The next day, riders started from Okotoks and rode all the way back to COP, covering another 110 kilometres.

Each member of the 33-person-strong team had to raise a minimum $2,500, but Pengrowth went well beyond that benchmark, raising more than $12,000 per team member.
Evans is the number one fundraiser, with a total of $124,000.

“In a humble way, he will admit that it did not take much effort,” says Uys, noting Evans’s leadership went far beyond riding. He was not only the top fundraiser for the entire event, but he also personally matched each of his employees’ donations dollar for dollar, making each donation count three times.

“We had 32 riders (as one had to pull out at the last minute, but still managed to contribute), but many more people were involved to make this possible and successful,” says Uys. Meanwhile, volunteers behind the scenes help the team by co-ordinating fundraising events and taking care of the logistics – everything from ordering team uniforms, to keeping everyone informed.

Already halfway there, Pengrowth would like to bring its 2015 team participation to 100 members (including both riders and volunteers), filling the many non-rider opportunities available to volunteer with the team. “That is where the real strength of the team comes from,” says Uys.

But the efforts were more than worth it for Pengrowth to do the ride. “It goes beyond the money – and every participant I have spoken to acknowledges some kind of individual intrinsic reward, satisfaction or sense of achievement that was experienced, apart from the aches and pains, that came as part of the deal,” Uys says.

Uys further adds: “It goes beyond the individuals, because as a team we accomplished something worthwhile and wholesome … and as a company we confirmed and made a statement about our culture and norms and values that we stand for. And so, as a society we are standing together to conquer cancer.”

Care for the caregiver often overlooked