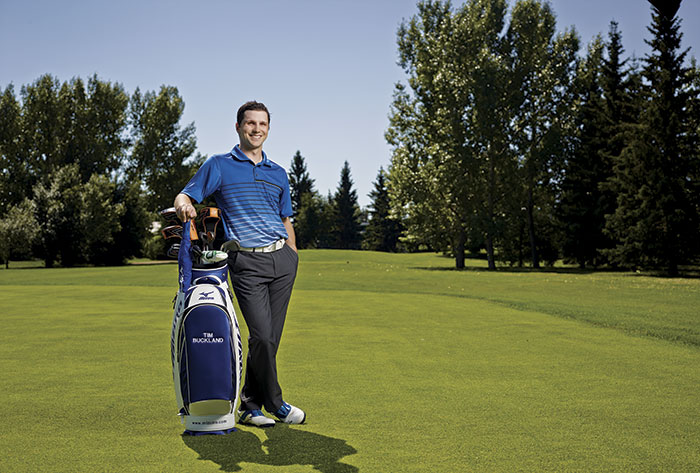 Tim Buckland was a talented young athlete bound for university when cancer hijacked his life.

“I was diagnosed with testicular cancer one week before my 18th birthday,” says Buckland. “I was in excellent shape, playing junior hockey and competitive golf. I couldn’t believe this was happening to me.”

“Feelings of isolation are prevalent at any age, but when you’re young, peers are extremely important. You want to meet people your own age – feel like you belong,” says cancer survivor Tim Buckland.

Overnight the Edmonton youth went from invincible to vulnerable, from an active teen with confidence to a frightened young adult with cancer. “I had surgery two weeks after they found it and it went well, so I thought I was out of the woods,” he says. “After that I didn’t want to think about it or talk about it. I basically wanted to pretend it didn’t happen and get on with my life.”

And he did, for three years. Then, at 21, while pursuing a university degree in science, active in sports again and involved in a serious relationship, he found another mass. He found relief following a second surgery, but only for one month, before a CT scan revealed more cancer. He then had a third surgery and four rounds of chemotherapy.

“It was devastating. My worst nightmare,” says Buckland. “This time I knew it was a big deal – I couldn’t avoid talking about it. I was having some psychological effects, anxiety and some cognitive issues that were interfering with my school. Still, it took me a full year to actually start looking for support.”

Support, says Buckland, was not easy to come by. Many friends from his youth found the topic foreign and uncomfortable. “They didn’t know how to react so most of them just kind of disappeared – moved on with their lives,” he explains. Scanning the faces at the Cross Cancer Institute, he rarely saw a person his age, and while his girlfriend (who would eventually become his wife) and his mom were there for him, he found it difficult to share his feelings and was reluctant to overburden them.

Eventually, he found a group called Young Adults Cancer Canada (YACC) and he was able to connect and share his experiences with other young people battling cancer. The group – based out of Newfoundland – offered retreats and conferences, and although he attended and found instant bonds with other young people, he felt the void of a day to day peer support group.

“With cancer you just feel so isolated,” he says. “Feelings of isolation are prevalent at any age, but when you’re young, peers are extremely important. You want to meet people your own age – feel like you belong.” 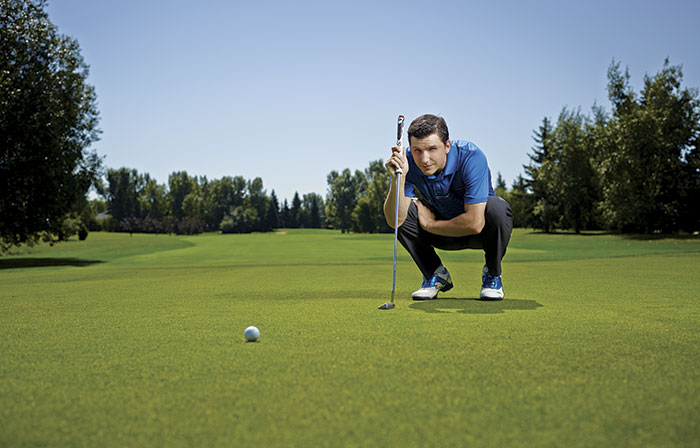 ON PAR: Many young adult cancer survivors, like Tim Buckland pictured above, have difficulty finding supports because of their age bracket.
Photograph By Romy Young

Dr. Sarah McKillop is acutely aware of the harrowing plight and complex issues facing young people living with cancer. A pediatric/adolescent/young adult oncologist, McKillop is a champion of adolescent and young adult oncology, and currently divides her time between the Stollery Children’s Hospital and the Cross Cancer Institute.

“The important thing about this age group is that it is a time of significant and dynamic development across all spectrums,” says McKillop. “Physically, they are still growing and developing and their brains are still developing. From the psychosocial perspectives there are several milestones that happen during the adolescent and young adult timeframe: they are becoming autonomous, developing independence, finishing school, exploring vocations. When a diagnosis of cancer happens, the impact is felt across all of these spectrums.”

McKillop notes that the improvement in cancer survival rates among the adolescent and young adult age range (15 to 40) isn’t as high as it is with the pediatric or adult cancer groups. This dismal reality, she explains, is not a new phenomenon – it has been the subject of studies for more than two decades and, though some improvement has been made, the issue still exists today.

“The clinical trial enrolment rate for adolescents and young adults is not as strong as the pediatric or adult groups,” says McKillop, explaining that the limitation is due in part to this age group being split up between the pediatric and adult sites. The split may cause a gap in supports and services, so the challenge is to find creative ways to diminish the disparity and improve the enrolment of these young adult patients.

“We provide excellent care to all of our patients regardless of their age or their type of cancer,” asserts McKillop. “But we need to recognize that there are unique needs in this population and the first step is to identify these and then actively help and support them.”

Another factor impeding survival rates with this population is that people often do not have a regular physician during their young adult years. Also, general practitioners may not suspect cancer or be familiar with cancer symptoms in this age group. Both can result in a delay in diagnosis and treatment.

“Many believe that young people aren’t supposed to get cancer,” says McKillop. “If a young person has a lump or pain somewhere, cancer is not an immediate consideration. The first thought is maybe it’s a sports-related injury, or something less serious. These sorts of delays can contribute to poor survival.”

Furthermore, there are many distinct types of cancers presenting specifically in this age bracket and differences in treatment responses and in how patients in the young adult spectrum tolerate treatment and therapy.

Overall McKillop is confident that increased awareness will continue to drive formalized programs and heightened systems and supports. “Nationally and internationally there are a variety of agendas being put forward with principles, recommendations and guidelines for caring for this population,” she says. “There have been some great strides in recognizing that there are unique differences with these patients, so the next step is a unified effort – a standard of care that effectively addresses the unique needs of this age group.”

Raja Mita, director of program investments at the Alberta Cancer Foundation, concurs. He notes that a myriad of patient groups, survivor groups and ground floor forces of doctors and nurses are leading the charge to help make a positive impact for adolescents and young adults with cancer in Alberta. The Foundation has launched an initiative to try and shore up resources and generate a collective push for effectual action against cancer in the younger population.

“Our goal is to align the strategic priorities of all the groups taking action so we can create a stronger and more unified approach to the issues,” says Mita. “We’ve scheduled a mini-conference on the subject for this fall to help set priorities, outline guiding principles and develop a framework that will hopefully see us all working together on a focus to address the needs of our adolescent and young adult patients.” 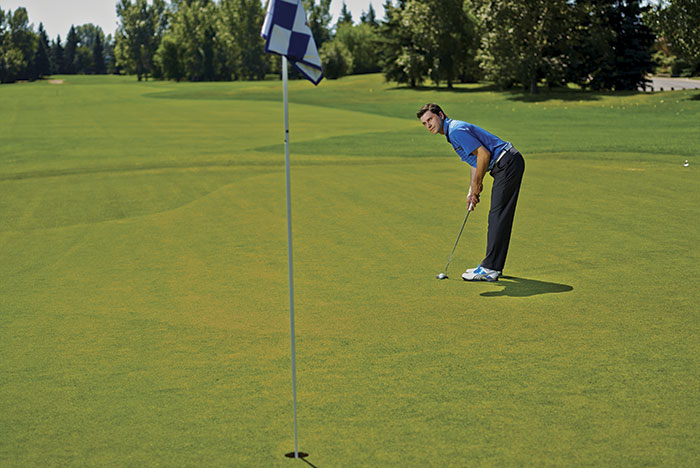 MAKING STRIDES: Tim Buckland is now 28, cancer-free and has begun to give back by volunteering at the Cross Cancer Institute with young adults.
Photograph By Romy Young

Meanwhile, Buckland is now 28, back on course and hopeful. He says, “I’ve been cancer-free for seven years and I’m feeling good; I’m even golfing again!” Buckland adds that though it was a struggle adjusting to his new normal, he has managed well, achieving a master’s degree in biochemistry, marrying his best friend and landing a job he enjoys.

“You never really ever get over cancer. You’re always that guy who had cancer and whether you get a bump or a nose bleed, you always worry that it might come back,” he says. “But generally I’m in a pretty good place with it – I’ve come to accept that this is my life now.”

Asked about supports and self-care as a survivor, he discusses his ongoing therapy in the form of helping others. “I volunteer at the Cross Cancer Institute and do a lot of fundraising and young adult advocacy,” he says, noting he also posts on the Cancer Knowledge Network, where he is the young adult editor.

“I take care of myself emotionally by speaking publically about my journey. It’s very cathartic to speak about it and reach out to others. It helps me a lot.”

According to pediatric/adolescent/young adult oncologist Dr. Sarah McKillop, while there are effective medical and psychosocial systems in place to care for cancer patients in that age range in Alberta, they need to be expanded to meet the needs of young patients. Some of the challenges facing this population include:

McKillop also acknowledges a need for an improved system of support for survivors in Alberta, as the impact of cancer may continue as these patients continue to grow and develop.

Counselling Goes to the Dogs