Breast cancer researcher and associate professor at the University of Alberta Ing Swie Goping turned heads in the world of cancer research when she discovered that a protein in breast tumours could play an important role in treatment. “No one had figured this out before,” explains Dr. John Mackey, an oncologist and researcher colleague of Goping’s. “People were asking, ‘Why didn’t someone at the National Institutes of Health or Harvard discover this?’ ”

Goping discovered that a protein called Bcl-2-associated death promoter – or BAD for short – made cancer cells more sensitive to taxane chemotherapy. “In the lab, if we got rid of the protein in the cancer cells, those cells didn’t die when we treated them with taxane therapy,” Goping explains. “But if we added more BAD protein, the cells were more sensitive to taxane therapy.” Because all women with breast cancer have variable amounts of the BAD protein in their tumours, Goping’s research could dramatically change the way women with breast cancer are treated.

Taxane therapy is often recommended for women who have more aggressive types of cancer, because it tends to be more effective than other drugs in these cases – but it doesn’t work for everyone. Goping’s research could give doctors a clear indication before they even prescribe as to whether taxane therapy is likely to work or not. And given that taxane is “one of the most toxic chemotherapies that we have,” a predictive diagnostic test could prevent hundreds of women in Alberta every year from undergoing a grueling treatment that won’t help them. On the other hand, Goping explains, “If your doctor was able to tell you ‘we found levels of protein in your tumour that shows that you’ll respond well to taxane therapy,’ that will give hope.” And for patients undergoing a treatment that might leave them feeling nauseated, damage their skin and decimate their immune system, hope is exactly what they need.

Since showing a correlation between the BAD protein and taxane therapy’s effectiveness in cell cultures, Goping is now studying hundreds of banked breast tumour samples to see if her conclusion holds true for human samples. Her research is being supported by the Alberta Cancer Foundation’s Transformative Program fund, which supports research that is likely to lead to new breakthroughs, improve treatment and increase the quality of life of cancer patients.

She’s doing this by measuring the levels of BAD in hundreds of samples removed from patients, and comparing that with data on which treatment each patient received and how successful they were. The hypothesis is that this research will show women who initially had high levels of BAD protein in their tumours responded well to taxane therapy, and vice versa. “We hope to have an answer within the next five years,” says Goping.

Goping’s research plays into a larger trend in cancer treatment, which is becoming more fine-tuned thanks to a greater understanding of the role various genes and proteins play. “Personalized medicine is the catch phrase now,” Goping says. “We need to understand what’s happening at the cellular level.”

Because of the nature of scientific discovery, many studies either don’t find a link, or only show one piece of a much larger puzzle, and therefore don’t change the way cancers are diagnosed or treated. One reason Goping’s research is so exciting is that “It’s something that can be taken right from the lab bench to the bedside,” explains Judith Hugh, a pathologist at the Walter Mackenzie Health Sciences Centre in Edmonton. “If she’s proven right, what this means is that the clinicians will be able to make more rational decisions about what type of chemotherapy to give.”

Going from the bench to the bedside isn’t easy, however. “It takes undying enthusiasm,” says Hugh. “You have to be willing to think outside the box, you have to take risks.” It also takes persistence. Goping has been conducting various studies related to BAD for more than a decade, and in that time she’s hit dead ends that have forced her to try new research approaches. “She goes about answering her questions in a very systematic way, whereas other researchers may bounce around from one topic to another,” says Dr. Alan Underhill, who is Goping’s husband and the Mary Johnson Chair in Melanoma Research at the University of Alberta and Cross Cancer Institute.

A “power couple” as Hugh calls them, Underhill and Goping often bounce ideas off of each other in the Edmonton home they share with their three teenage children. “Things come to you when you’re not expecting it, like maybe when you’re washing the dishes, so we end up talking about cancer research a lot,” explains Goping. “It’s so nice having access to someone you can test out ideas on without the fear of looking like an idiot,” Underhill says.

As someone who lectures students in the classroom and oversees their research in the lab, Goping is well practised in helping other researchers shape their ideas. “Some lab environments can be high pressure and hostile. Ing Swie treats people with a lot of respect, and gives them the time they need, which varies from student to student,” says Underhill. Hugh, who has visited the lab on a number of occasions and sees Goping interact with her student, explains, “She appears to be a cheerleader. She proud of them, she’s guiding them.”

Indeed, what makes Goping a research rockstar is not just her individual research, but the way she’s grooming future generations of cancer researchers. In addition to her own study, students in her lab are testing out new drugs and studying more precisely how the BAD protein affects cancer cell growth in mice tissues. “We try to really use a team-based approach,” says Goping. “Somebody’s eyes might see something the other person’s didn’t.” This approach is important, given that the studies in the lab are interconnected, and the researchers can learn from each other about how to design a study and what research questions to ask. “The researchers on one project may know something that can help their friend on another project. That’s a very important thing we do, to build that camaraderie,” Goping says.

Seeing her students develop their ideas in the lab is something Goping finds incredibly rewarding. “As they start to get comfortable and do their own readings of the studies being published, you start to see them reaching out and asking their own questions,” she says.

Of course, juggling teaching with research, grant writing and other bureaucratic tasks can take its toll. To de-stress, Goping goes out with three of her scientist girlfriends for dinner, a group they cheekily call, “Definitely Not a Journal Club.”

She also debriefs with Underhill. “We spend a lot of time talking about the problems we’re facing,” she says. “Our jobs can be high pressure and stressful, so it’s nice to have someone who says, ‘You’re doing great.’ ”

Goping credits her husband, kids and friends for sustaining her energy in the long haul of her research. She also feels gratitude for the Alberta Cancer Foundation and its donors who support her work. After all, conducting research that changes how cancer is treated doesn’t happen by fluke, it’s taken Goping years and years of experimenting. “There are no highs without lows in cancer research, there’s not a quick fix for anything, but the more we know, the better we are at guessing where to go,”
explains Goping. “It’s rewarding, but you have to fight for it.”

You have three teenagers (aged 15 to 19), do you think they’ll go into cancer research?
We’ll see. That decision is completely up to them. If they do decide to go into research, they’ll know what they’re in for, because they hear all about it around the dinner table.

What do you like to do for fun?
I go horseback riding with my daughter; she got me into it when she was young. We ride in the arenas and sometimes do trail rides. It’s nice just to get out to the barn and clear your mind.

Where are you planning to go for your next vacation?
We’re going to Vancouver Island. We’ve rented a house by the water and we’re so looking forward to just chilling on the beach and cooking and checking out the sights.

How do you connect with your family?
With two parents working and three kids that are pretty busy with sports, school work and friends, we try to make the time to sit down every evening for dinner. Everyone can catch up and connect. My husband likes to cook.

Where do you get your motivation?
I get a lot of motivation from the students and the other researchers I work with in the lab. Seeing their energy and enthusiasm is really encouraging, and I love that I’m able to see my students grow, to learn how to critically think and become more independent. 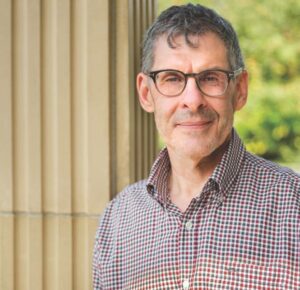