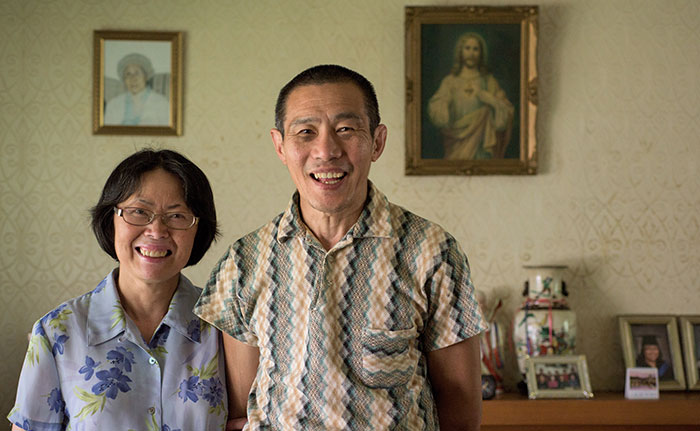 After a lifetime together, Florence and Peter Cheung are considering their legacy after death. The Edmonton couple recently announced they will leave money to the Alberta Cancer Foundation in their will, in the hope their donation will help save lives. But Florence and Peter don’t fit the profile of typical philanthropists. They didn’t inherit mass amounts of wealth, or make high earnings in business.

“I want to leave a little bit of a legacy to the Alberta Cancer Foundation so they could get a researcher to come up with a cure,” says Florence Cheung.

Peter, now retired, eked out a modest living as a mechanic, and Florence recently took early retirement from her career as an early childhood educator. They’ve lived frugally, not even affording themselves the modern conveniences of a computer or cellphone. More than 10 per cent of their overall budget goes to charitable organizations, and Peter regularly donates blood and platelets.

Despite their frugality, they’ve lived well, having spent most of their years together. They met as children in Hong Kong. When Peter was just a baby, his grandmother, Yuen Kwan Heung, would look after him in the day, and she would receive regular visits from teachers at the boarding school where she and her husband lived and worked.

“I must have been a very cute baby or something,” says Peter. “The ladies in the school loved to cuddle me.” One of those ladies was Florence’s mother, Mary Pang. Once Mary gave birth to Florence, her family would come to Peter’s family farm for holidays. As toddlers, Peter and Florence were fast friends. “We were like brother and sister because my mother was actually his godmother,” says Florence.

But as they grew older, Peter spent more time with Florence’s brother than Florence herself.

“Boys and girls didn’t play together at that time,” he says. Eventually, in 1968, Peter moved to PEI for what he calls “a new beginning” in Canada. And in 1975, he moved to Edmonton for work. “They were desperate for cooks in Edmonton back then,” says Peter.

So he had no trouble finding a job as a cook, and later, an entry-level position at a mechanic shop. The work was plentiful and Peter was occupied full-time with getting his start in Canada and bringing his family over from Hong Kong.

When he, his parents and his sisters – who were living with him at the time – received matching letters from Hong Kong one morning in 1979, he was in no hurry to open them. He had to get to work. But his parents and sisters were curious. So they peeked at their letters. And when Peter got home from work, his family was waiting for him. “My sisters were anxious the whole evening,” he says. He couldn’t figure out why they were acting so strangely – until he went through his mail.

The letter from Hong Kong was sent by Florence’s parents. It was a marriage proposal. Peter was shocked. Why would Florence’s parents – whose family was wealthier than his – want him to marry their daughter? “I’m a nobody; I’m a grease monkey,” he thought.

But Florence wasn’t concerned about how much money Peter had. “What matters for me is having a good husband who loves me and is willing to take care of me,” she says. It was an unusual practice in Hong Kong at the time for the woman’s family to propose marriage, especially when the couple in question had never dated. But because he had grown up with Florence and he knew her family well, he was confident they would be a good match.

So he wrote a letter accepting the proposal. Just over a year later, Florence and Peter were saying their vows at a church in Edmonton. Florence had flown to Canada just a few days earlier from Hong Kong, and she was still suffering from jet lag. But that day, she didn’t show any signs of fatigue. “I was way too happy,” she says.

But as with many couples, Florence and Peter were unable to have babies. So Florence threw herself into her work as an educator, and found a job at a daycare. She’d studied English in college in Hong Kong and taught for a few years before coming to Canada. But she didn’t have the training she needed to teach young children, so she went back to school to study early childhood and development and graduated – with distinction – in 1995.

After more than two decades as an early childhood educator, she followed Peter into retirement late last year so they could spend more time together. Retirement has afforded Florence and Peter a lot of time to think about what kind of legacy they want to leave when they die. With no children to inherit their estate, they decided to leave almost all their money to charity, including the Alberta Cancer Foundation.

For Florence, the decision is personal. She has lost many family members to cancer, including three uncles, her aunt and her grandmother. And she wants to prevent other families from experiencing the same loss she did. “I want to leave a little bit of a legacy to the Alberta Cancer Foundation so they could get a researcher to come up with a cure,” she says.

Florence and Peter hope their experience proves that, if they can donate, anyone can. “It is really important that we share our humble story,” she says “Each donor has their own story to share and people will have their own reaction to it. We would hope that they would be inspired to donate.”