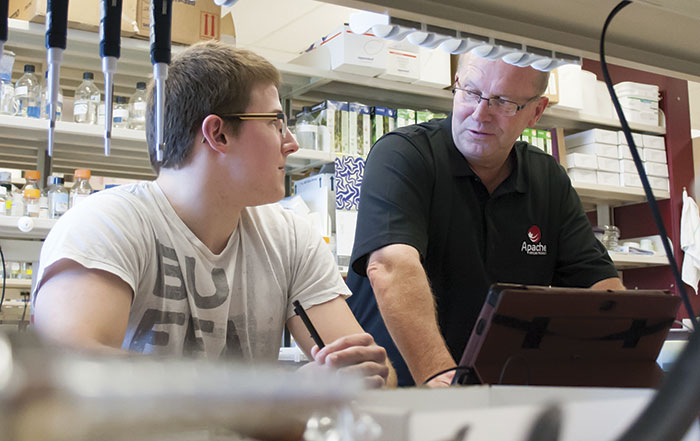 SOUND INVESTMENT: Don McNabb, right, says he is thankful to have the studentship he enabled in his late wife’s name in the capable hands of pharmacology student Douglas Brown.

Douglas Brown was enthralled with Dr. John Lewis’s experimental oncology lab at the University of Alberta. “The research techniques they were using were the ones we were told had just been developed,” explains the 22-year-old, who recently completed his fourth year of an undergraduate pharmacology degree. The lab, which is working to develop innovative treatment such as non-toxic chemotherapy, was “something I wanted to be a part of,” he says.

“Many chemotherapy drugs will just kill everything. The growing research field in cancer is to be more selective with drugs, so we can reduce the side effects,” says pharmacology student and researcher Douglas Brown.

Thanks to the Cathy Compton-McNabb studentship, a research grant awarded to an ambitious and talented student researcher, Brown’s dream has come true. Since May, he’s been working in Lewis’s lab, researching a compound called VX-50, to see if it can more effectively target a type of acute myeloid leukemia – one that constitutes approximately 25-30 per cent of all cases of the disease. Its trademark is a mutation in the FLT3 protein, which is found in the cancer cell.

There is already a drug being used experimentally to target FLT3, but it casts a wide net, affecting many proteins that are similar to FLT3 and causing harmful side effects like swelling in the legs and frequent vomiting. Additionally, over time, the cancer cell adapts and FLT3 can mutate again, so that it’s no longer vulnerable to the treatment. Brown is hoping VX-50 will target FLT3 more effectively, without giving the cells a chance to build resistance.

“Many chemotherapy drugs will just kill everything,” explains Brown. “The growing research field in cancer is to be more selective with drugs, so we can reduce the side effects.” As researchers hone in on the proteins, enzymes and receptors specific to cancer cell growth, drugs are becoming more and more targeted.

Here’s how his experiment works: Brown fills a test tube with leukemia cells that have a FLT3 mutation, and then treats them with VX-50. So far, the compound is effectively killing the FLT3-mutated cancer cells. The next step for Brown is to test his compound over time, to see if the cells develop a resistance to it.

The ability to bounce his ideas off Lewis and other researchers in the lab has been a huge boon. “If you have any problems, there’s always someone who has some sort of solution so you don’t have to sift through literature for three hours like you would in school,” says Brown.

He knows that VX-50 will still have to go on to animal and human trials, meaning it would be at least five to 10 years before the compound is prescribed to patients – and that’s only if Brown’s continuing studies show it to be effective. But after having met Don McNabb, whose family holds an annual golf tournament for cancer research in memory of his late wife, Cathy, Brown is ready for the long, bumpy road of cancer research. “It was quite incredible to meet people who have so much faith in me and my research,” he says. “It’s an incentive to work harder, it keeps me going when you hit those dead ends, to know that people are rooting for me.”

Describing Brown as a “brilliant kid,” McNabb says the studentship is a perfect way to honour Cathy, who died from leukemia in 2009. “Other than [being] the most fantastic person I’ve ever met, the love of my life and the kind of person that everyone liked, she was an outstanding teacher,” he says, adding that Cathy taught students from elementary school to college, focusing especially on children with intellectual disabilities.

Come Fly With Me