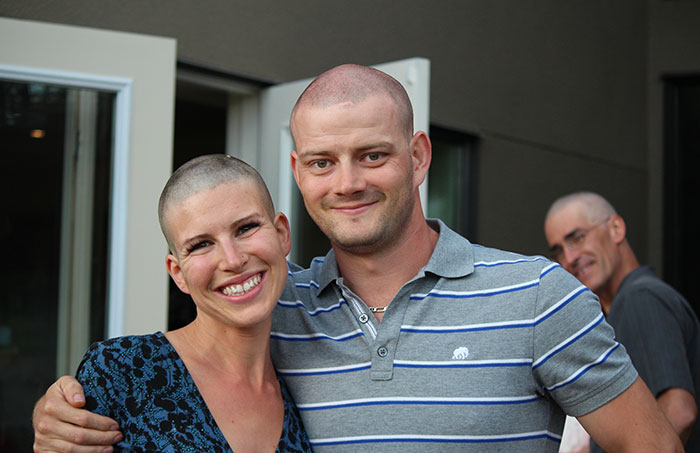 SOUL MATES: Elizabeth Daye showed she was “Naked in Solidarity” by shaving her head to match Cameron’s.

In 2012, Calgarian Cameron Daye was like many young men in their mid-20s – athletic, musical, artistic, focused on his career, and a family man looking forward to marrying the love of his life. Then, in late July, Cameron was diagnosed with spindle cell sarcoma, a deadly connective tissue cancer characterized by tumours which begin under the skin, between muscles and in surrounding organs, which start as a small lump and grow with inflammation. It is most prevalent in children and young adults.

He responded to the diagnosis by moving up his wedding date to September 2, 2012, and a concerted effort to make the most of the time left with his wife and their two dogs, Bentley and Mickey. His wife, Elizabeth, became focused on finding answers and hope. “When he first got diagnosed, I felt desperate to do something and didn’t know what that looked like,” says Elizabeth Daye. “I started doing research into different causes and contacted the Alberta Cancer Foundation.

That’s when I found out about Rob Pearson’s fund for sarcoma research.”

Elizabeth encouraged Cameron’s father Ron Daye and his company, Rangeland Engineering, to put some resources behind sarcoma research. She even held a fundraiser, Naked in Solidarity, in September 2013, which raised $14,000 for the Catherine M. Pearson Studentship in Sarcoma Research. She shaved her head in support of Cameron’s waning locks.

Ron gladly obliged Elizabeth’s request, topping up the studentship with a $50,000 donation. But that was just the beginning of Rangeland’s contributions to the Alberta Cancer Foundation benefiting sarcoma research. They raised $33,000 at their Christmas party to create a research allowance in Cameron’s name, attached to the Catherine Pearson studentship. But they wanted to keep the conversation going and do even more.
“We had meetings with Dr. Jan-Willem Henning and Dr. Don Morris [at the Tom Baker Cancer Centre] to figure out what’s the best way to get funding directed toward sarcoma, because you could see there was a shortage in research and information,” explains Ron. “We thought ‘how do we improve on that?’ So, after several meetings with them, we met with the Alberta Cancer Foundation and put a fellowship together that would top out at $1.5 million over three years. The basic structure is we’ve guaranteed to contribute $500,000 a year for three years, but also we’ve agreed to fund a fellowship in addition to that, starting now.”

The latter became the Cameron C. Daye Cancer Research Clinical Fellowship, named to honour Cameron, who died this past February 15 at 28, despite a spirited struggle with his cancer and a period of remission in 2013. Even his oncologist, Henning, was so encouraged by his patient that he vowed to ride in Cameron’s name in the 2014 Enbridge Ride to Conquer Cancer. Elizabeth and Ron were both so thankful that they joined the Tom Baker Cancer Centre’s team in the fundraising 250-kilometre ride. Meanwhile, Rangeland Engineering entered a team in the August 9-10 event, and this year marked the first-annual golf tournament, hosted by Rangeland, in Cameron’s name.

In addition to the fellowship and studentship, Rangeland matched contributions raised at an April “Pink Party” held at Belgo Brasserie in Calgary by Cameron’s friends, to benefit his endowment with the Alberta Cancer Foundation. The event, which saw patrons donning the title colour, raised $55,000.

Ron, like Elizabeth, is thrilled the funds raised in his son’s honour will go to the cancer that so little is known about. “Unless there is a cure for sarcoma all of the sudden, those funds will go to sarcoma research, clinical trials and even basic research,” says Ron. “Our interest here is sarcoma. We have met a number of sarcoma victims – and it’s brutal.”

Elizabeth is hopeful the money her father-in-law’s company and Cameron’s friends and family have put toward sarcoma research will help others have a happier outcome, and she’s thankful her husband’s name is connected. “Right now you hear the word ‘sarcoma’ and basically if it’s not in stage one, it’s a death sentence. Cam was lucky, he lasted much longer than was expected; he always said that was because he wasn’t ready to leave me yet. It might be the one thing that allows someone to have a different story.”

Steps of hope in Iqaluit