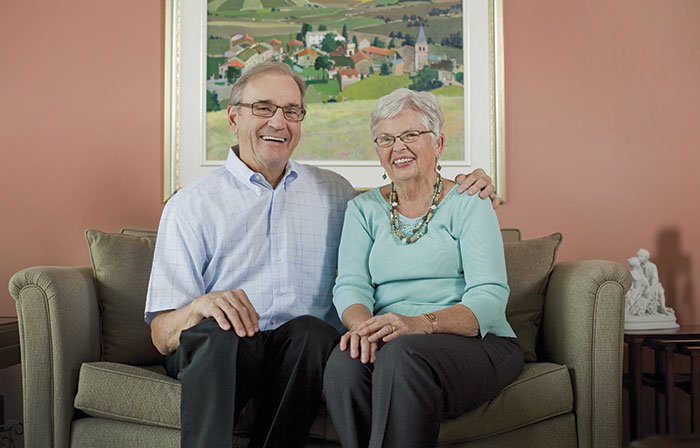 Mary Agnes and Ivan Radostits recognize their family’s history of ‘spectacular care’ at the Cross Cancer Institute with $100,000 donation for lymphoma research

Mary Agnes and Ivan Radostits of Edmonton have always been very involved in their community. Mary Agnes, 75, a former physiotherapist, was one of the founding board members of the Glenrose Hospital Foundation and volunteered for years at her local church. Ivan, also 75, and a long-term businessman in the grocery industry, spent significant time with the Jaycees, a worldwide federation of young leaders and entrepreneurs, as well as the Rotary Club, and was on the founding boards of the University of Alberta, Misericordia and St. Joseph’s Auxiliary hospitals.

“Our satisfaction is not necessarily in the giving of this donation, but in the hope it generates that one day there will be a cure for cancer.”

The couple, like many others, has also donated money to various worthy charities. But two years ago, the Radostitses made a particularly hefty donation – $50,000 – to research at the Cross Cancer Institute.

By then, they’d had a long history with the facility. Ivan’s father was diagnosed with prostate cancer when he was 59, and was treated there. Mary Agnes’ father was also treated, for mouth cancer, at the facility. “The Cross Cancer Institute gives spectacular care,” says Ivan. “It is out of this world.”

But five years ago, cancer came to roost very close to home. Mary Agnes found a lump under her right armpit – a biopsy confirmed non-Hodgkin lymphoma. This type of cancer originates in the cells that make the immune system. It is a more common lymphoma than its counterpart, Hodgkin lymphoma, and has at least 17 different types. More than 69,000 people are diagnosed in North America every year with lymphomas of all varieties.

Immediately after the diagnosis, Mary Agnes and Ivan went to Palm Desert, California, for a holiday. Upon their return, Mary Agnes had surgery to remove the tumour and then embarked on a long-term chemotherapy regime – every six weeks initially, then every three months, for four years. The treatment went well and there were virtually no troubling side effects. “The hardest part was getting the needle in my arm,” says Mary Agnes. “After that it was clear sailing.” Her last session was in the fall of 2013 and she will have a follow-up appointment this summer. The couple hopes to hear the words “in remission” at that meeting.

As a result of Mary Agnes’ diagnosis, the $50,000 went to a research area that could make the biggest impact on lymphoma research, a donation the Radostitses made halfway through her treatment. That news was music to the ears of Dr. Luc Berthiaume, a researcher in the department of cell biology at the University of Alberta. He
received his PhD at the University of Sherbrooke, and after a post-doctoral fellowship at the prestigious Memorial Sloan-Kettering Cancer Center in New York City, he studied signalling mechanisms in normal and cancer cells at University of Alberta, where he has been for the last 18 years. “There is a clear, unmet medical need for answers to hematological cancers,” he says. 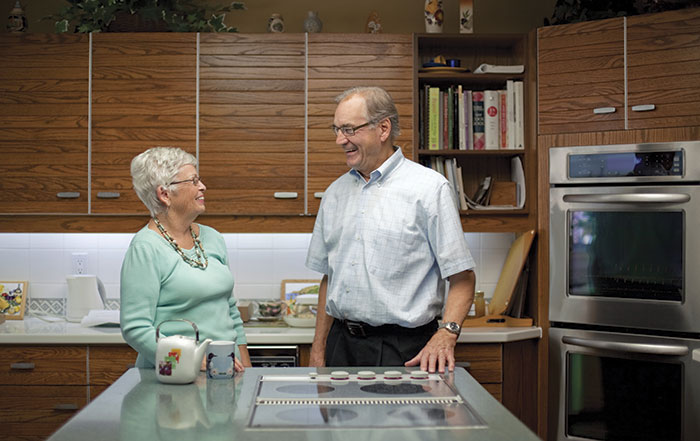 Philanthropic pair: Mary Agnes and Ivan Radostits wanted to give back to the Cross Cancer Institute, where Mary Agnes was treated for non-Hodgkin lymphoma.

Donations, like the one made by the Radostitses, are critical to funding novel ideas and areas of cancer research identified by the Alberta Cancer Foundation’s scientific review panel, including Dr. Berthiaume’s work. This donation jump-started the work on our new personalized treatment strategy for lymphomas, says Dr. Berthiaume, and provided the seed money needed to obtain a larger three-year grant from the Alberta Cancer Foundation to evaluate the new treatment strategy.

Over that term, Dr. Berthiaume and clinical trialists at the Cross Cancer Institute will evaluate the efficacy of a new drug that has been found to be “highly-selective” for the killing of lymphoma tumours. The use of the drug will be guided by the presence of an under-expressed “biomarker” that identifies molecular lesions in cancer cells that makes them vulnerable to the drug. In other words, “in this type of intervention, called personalized medicine, the drug is only given to people who will benefit from it and this therefore spares patients from unnecessary treatments,” he says. “It is a novel way to treat cancer patients.”

The overall goal of the grant is to test the viability for widespread, clinical applications. This involves showing that the drug treats lymphoma in animals, and proving that it is safe enough to begin testing in humans, through a Phase 1 trial. “If all goes well, at the end of year two we should be able to test the drug in humans,” says Dr. Berthiaume. There is room for optimism: the drug has been found to be non-toxic in mice, and is 300 times more efficient in killing cancer cells than normal cells, while leaving normal cells intact. “It is a highly selective bullet in the laboratory setting, giving hope for a new cancer therapy with minimal side effects,” he says.

Berthiaume’s work is likely to transcend lymphoma cancers: the lesions found in certain lymphomas that render them susceptible to the new drug have also been identified in many other common cancers. If successful, he says, the work will “improve patient care and outcomes, spare patients with unresponsive tumours the toxic side effects (of traditional treatments) that reduce quality of life and wellbeing and reduce healthcare costs.”

This information resonates with the Radostitses, so much in fact, that they recently made an additional $50,000 donation to the Alberta Cancer Foundation. “Without research, we make no progress,” says Ivan. “It is absolutely essential for developing new treatments.”

The couple looks forward to a cancer-free journey ahead. They have four children and seven grandchildren to spend time with, and a property at Lake Windermere to visit. Ivan golfs regularly and – despite having osteoarthritis – still goes to an office where he manages his real estate holdings and conducts business with his sons. The Radostitses celebrated 50 years of marriage in June 2013 and are well-travelled (at last count, they’d been to 47 countries), but still have South Africa on their bucket list.

And, now that Mary Agnes has been recently diagnosed with Alzheimer’s disease, they are attending information sessions at the Alzheimer Society in Edmonton. There are definitely more challenges ahead, but this couple is ready and optimistic.

“We’ve had a great life,” Mary Agnes says. “Our satisfaction is not necessarily in the giving of this donation, but in the hope it generates that one day there will be a cure for cancer.”