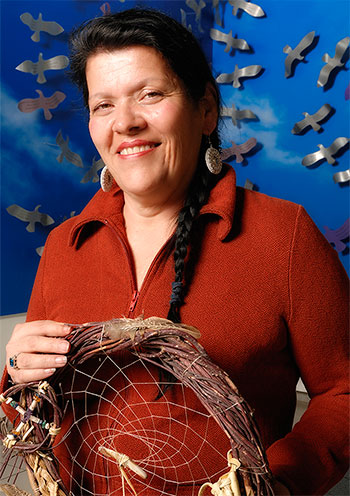 As a teenager growing up in Lac St. Anne, 75 kilometres west of Edmonton, she dropped out of high school at 15. Pulling in a pay cheque just seemed more important than a diploma. “That was in the ’70s,” says Letendre. “You could get a job at a really early age. Alberta was booming at that time.”

But in 1989, after more than a decade spent cutting hair, and when the economic strain of single motherhood became too taxing, she went back to school. Of Cree-Metis heritage, Letendre had always wanted to have a job that would allow her to work with Aboriginal people. So nursing “just seemed like a natural fit,” she says.

Today, Letendre is leading the way in consultative approaches to Aboriginal cancer care research in Alberta. Shirking the “helicopter” style of research of her predecessors, Letendre has adopted a model based on community participation. Her aim is simple: to improve the health of Aboriginal peoples. And that means working with communities to develop and implement strategies for care.

“From Aboriginal cultural perspectives, an individual’s actions, the decisions that they will make, traditionally would take the collective into consideration,” she says. “If you want to work at the community level, you have to establish those relationships. You have to work from a place that acknowledges the importance of the community and the collective.

Going back to school was nerve-wracking for Letendre. She applied to all three nursing schools in Edmonton at the time, but she feared her inexperience with post-secondary education would preclude her from being accepted to any, let alone her top choice: the University of Alberta. Her anxiety proved unfounded. Each school offered her a spot. “I guess my desire to be in that profession must have come through in my applications,” she says.

Mature students often face difficulties when returning to school after so many years without tests or homework. But for Letendre, the real challenge came not in the academics, but in social isolation. As one of the only Aboriginal people in her program, Letendre was shocked to hear the negative ways some of her peers talked about First Nations, Inuit and Metis people.

“There’s not an engagement with a community or an individual where I do not learn something. For me it’s satisfying and exciting work.”

“We always have conversations about Aboriginal populations when we talk about FASD (Fetal Alcohol Spectrum Disorder), addictions and social problems,” she says. Whenever the conversation turned to Aboriginal peoples, the entire class looked at her expectantly. “How can one individual speak on behalf of an entire population? You can’t,” she says. “But you’re put in that situation an awful lot.”

Letendre responded to isolation among her peers by seeking out opportunities to work with Aboriginal peoples. In that search, she found work assisting the health director of the Yellowhead Tribal Council (YTC) of Alberta as part of one of her first practicums. The health director of the YTC was unhappy with a needs assessment report that looked at cancer care needs of the five communities that belong to the YTC. “It just was not reported in the respectful way it should have been,” Letendre says.

“The experience was just phenomenal,” she says. Through this experience, she came to understand the importance of seeking out the perspectives of the communities when research health among Aboriginal peoples, she says.

Once she began working as a registered nurse in 1991, Letendre found that neither researchers nor health-care professionals could tell her which health care programs Aboriginal peoples were most likely, or able, to access. So she decided to find out for herself. Once again, she headed back to school. This time it was for a master’s degree in community health, and later a PhD, at the University of Alberta.

It was during her graduate work that Dr. Malcolm King first noticed Letendre’s talent for bringing people together. She had volunteered to organize a conference on Aboriginal health research funded by the Canadian Institutes of Health Research, where King worked.

“It was a huge success,” he says. “It resulted in some important and long-lasting connections, which are really important, at a peer level.” King would later supervise her doctoral thesis, which focused on cervical cancer among Aboriginal women. She graduated in 2008, becoming the first Aboriginal person to earn a PhD from the University of Alberta.

Around that time, King accepted a position as the first scientific director of the CIHR’s newly-formed Institute for Aboriginal Peoples, and he was looking for an associate director. He could think of no one more qualified than Letendre, who jumped in with both feet, taking the lead on organizing a series of conferences that brought together Aboriginal peoples from communities across the country.

Up until that point, researchers rarely consulted anyone without qualifications about how research could be used to address health issues in Aboriginal communities, says King. So-called “helicopter research” was common practice. In this style of research, researchers sometimes literally helicopter into communities, gather information and are never heard from again.

“So really this is quite different,” says King. “This is recognizing that people in communities who aren’t necessarily equipped with doctorates actually can come up with the approaches and solutions to research on health issues the community faces.”

“We know that as people. If we create a healthy environment physically, mentally emotionally and spiritually, in our homes, our children will be healthy as well.”

Through these conferences, Letendre and King drafted a report that offered a rich sense of the most significant health issues facing Aboriginal people in Canada, and how the institute’s future research might address those issues. But Letendre says it doesn’t take a research paper to realize the most important tool for improving the health of the individual is a healthy community.

“We know that as people. If we create a healthy environment physically, mentally emotionally and spiritually, in our homes, our children will be healthy as well,” she says.

In 2011, Letendre brought her focus on community consultation into her job as the provincial coordinator for Alberta Health Services’ Community Oncology program. In that role, she worked to improve access to cancer care among Aboriginal people in the province, which required her to establish trusting relationships with the people who live in those communities.

While Letendre says her work has had a positive impact on communities, the community members have also had an impact on her.

“I have a great respect and admiration for the survival, the resiliency, and the cultures, the diversity of these peoples,” she says. “There’s not an engagement with a community or an individual where I do not learn something. For me it’s satisfying and exciting work.”

It’s just the kind of satisfying work Letendre imagined for herself when she left her job as a beautician to go to nursing school 25 years ago. She says it has been a whirlwind quarter-century, and she’s not ready to slow down. In March, she accepted a position as scientific lead for the community innovation team with the Alberta Cancer Prevention Legacy Fund, a $25-million annual fund established by the province of Alberta in 2006 to support prevention, screening and research.

Letendre will take an arms-length role with community oncology as she transitions into her new job helping the fund integrate its research and prevention components. “I’m pretty excited about that,” she says.

The Skinny on Tanning