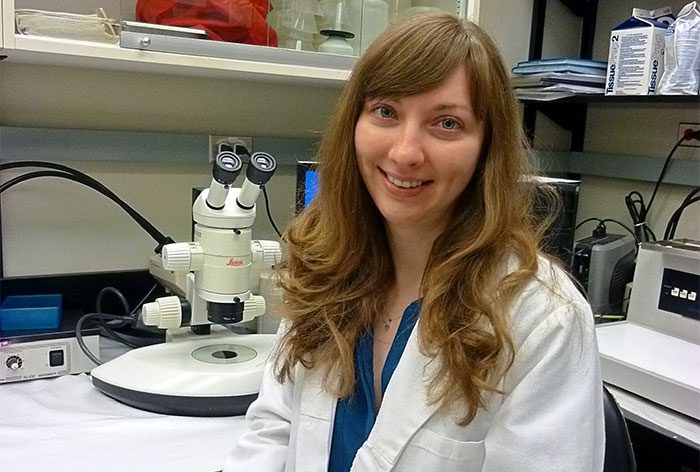 Karin Coles and her brother Warren wanted to fulfill their father’s wishes and legacy through giving back in his honour, and their hard work to do so has led to the influential Fred C. Coles Fellowship, via the Alberta Cancer Foundation.

“He was very involved with the Alberta Cancer Foundation, particularly the Tom Baker Cancer Centre,” says Karin, of her father Fred. “Warren and I made a collective decision that funding a fellowship would be the best use of that legacy and the best use of the donations that were made in his name, so that there would be an ongoing piece to contribute to cancer research.”

While Karin and Warren did not specify what research the fellowship should support after Fred’s death of cancer in 2008, the Coles mandated that it fund Alberta-based “breakthrough information in cancer identification and treatment.”

It only takes a conversation with Yulia Shulga, the fellowship’s beneficiary, to realize she is doing impressive things with it. The post-doctoral fellow in the department of oncology at the University of Calgary is working with breast cancer stem cells to better understand how they form tumours, a continuation of work that was initiated by Dr. Derrick Rancourt. Now Shulga works under Rancourt, in hopes that their efforts will one day lead to a cure for cancer. A Canadian Institutes of Health Research fellowship further supports her research.

“We are interested to know if we can make a model of a tumour in vitro, so in a dish,” says Shulga, 32, adding it’s for the purpose of studying cells as close to human as possible. “What I am also trying to do is reprogram the cells into IPS cells. Shinya Yamanaka from Japan just got a Nobel Prize for doing this from a regular fibroblast. You take a regular cell and reprogram them to pluripotent stem cells and they became the same as embryonic stem cells. So we are trying to do the same and see if this cancer potential can be erased during the programming or it will stay there.”

Since induced pluripotent stem cells can be derived directly from adult tissues, they not only eliminate the need for embryos, but can also be made in a patient-matched manner, which means that each individual could have their own pluripotent stem cell line. It also means not having to test on animals.

“I think it’s important because it’s going to open up new ways of looking at cancer biology,” says Rancourt. “We’re kind of limited by having to do transplantations in animals.”

Shulga came to stem cell research in Canada late in her academic career. After earning an undergrad degree from Novosibirsk State University in her native Russia, she did her PhD in biochemistry at McMaster University. It was then that she decided to turn her attention to stem cell research, which she hopes to continue past the August 2016 end date of her fellowship.

“Ideally, I would like to find a faculty position to become a professor and continue my research,” says Shulga. “I am really interested in the field of cancer and would be interested to see how we can fight cancer using cancer stem cells or any other aspect of cancer. There are still so many types of cancers, and people have been trying to cure. It for so long, and there are still very few available drugs for any cancer. I think some of them can be cured, but many of them are so progressive and hard to cure, it’s very unfortunate and I want to change something about that.”

Karin says she and Warren have met Shulga and Rancourt, and that their father would appreciate their dedication. “One of the things Dad had said to me, even in the last week of his life when we were talking about cancer and his experiences, was ‘maybe what I am doing right now isn’t going to help me, but if it can help the next person, then I am going to do it,’ ” she says. “Knowing that in Alberta we can contribute to having some of the best science minds come together and tackle some of the most difficult medical problems, being a small part of that and contributing to the work that can be done in that area is pretty significant.”