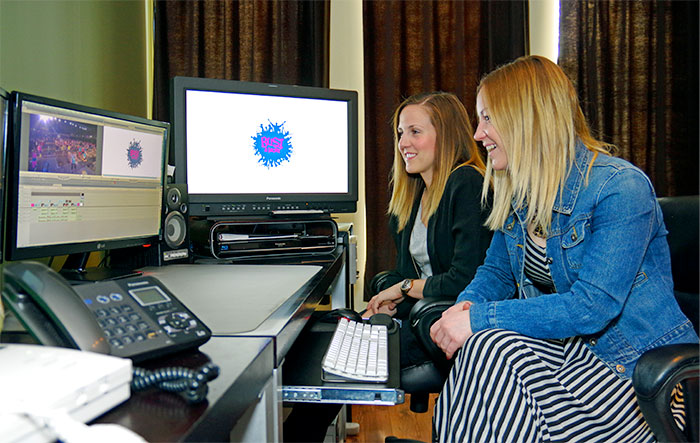 ON THE MOVE: Sheena Moore and Brittany Black (foreground) of Lindisfarne Productions, the company behind Bust a Move’s sponsor videos, edit some footage.
Photo by David Baron

Those who have participated in Bust a Move for Breast Health (BaM) – the six-hour fitness fundraiser that sees hundreds sweat it out in the name of raising money for the Alberta Cancer Foundation and cancer research – have witnessed the creative genius of Lindisfarne Productions at work.

“We started working with the Alberta Cancer Foundation before Bust a Move was even in Edmonton, and once Bust a Move came around, we really started doing a lot of work,” says Sheena Moore, whose expertise is behind the planning, interviewing, shooting and production of dozens of sponsor videos for Bust a Move. Lindisfarne also donates the final product. Ranging from hard-hitting to whimsical, the 20-plus videos made over the past three years are as much a part of Bust a Move as the Zumba, yoga and fitness classes held throughout the day-long annual March event.

Lindisfarne also features a video of themselves of each year and consistently pushes the envelope – from lip syncing “Video Killed the Radiostar,” to a comedic yoga skit. They also participated on the dance and exercise floor in two out of the three years Bust a Move has been in existence and their whole team sweated it out on the floor this year.

Moore says getting involved as a volunteer partner several years back, alongside Lindisfarne’s owner Simon Morgan, just seemed like the right thing to do. “For me, it was just a really good fit for us to work with Bust a Move,” says Moore. “We do get to be really creative with these videos and have some fun.”

“With PCL, for example, we are dealing with a serious company with senior level managers – and they’re wearing tutus [in their video],” adds Moore. “It gives us a different relationship with local businesses, and I think they have a lot of fun working with us, too. So it is a two-way street. Yes, we are donating our time, but we enjoy it. Our staff members love working on Bust a Move.”

Lindisfarne was also the machine behind the Bust a Move “lip-dub” video. The video features staff, researchers, doctors and patients at the Cross Cancer Institute mixing it up to the sound of rapper Young MC’s hit song, to raise awareness for the first Edmonton Bust a Move in 2012. “Working on the lip dub video was really amazing. They involved the researchers and oncologists – everybody from the team,” explains Moore. “I don’t think the Cross Cancer Institute has ever done anything like that before. It’s not often that they get to do fun things in that building; seeing them all let loose was pretty exciting for us. And then the buzz that created for the event was wicked. It was neat to see the video help with that.”

Lindisfarne is also the Alberta Cancer Foundation’s go-to production company for its “Report to Donor” videos, which typically feature an Albertan living with cancer whose life and the lives of family members have been impacted by the Alberta Cancer Foundation’s work. Morgan says that aspect of his paid work, though at times difficult, is also rewarding. “It makes us feel great to think that anything we are doing may help raise awareness about cancer,” Morgan says. “We have very few projects that enable us to give back to such a worthy cause. Working with the Alberta Cancer Foundation over the past few years has really given us a new perspective on things – and we look forward to every new project that comes up.”

With the way the partnership has worked out so far, both with BaM and the “Report to Donor” videos, Lindisfarne and the Alberta Cancer Foundation are keen to keep working together, says Moore. “For us it’s worthwhile because we get to share all of those stories, and if we can be a small part of it – this is the only way we know how. We are happy to do that.”

FREEZE FRAME: For more information about Lindisfarne Productions or its work with the Alberta Cancer Foundation, visit their website, or to watch its Bust a Move “lip dub” video below.