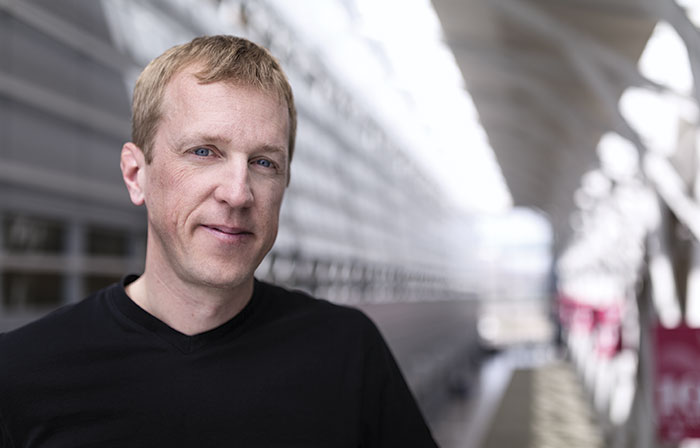 TRAILBLAZER: Dr. Alain Tremblay, researcher and associate professor of respiratory medicine at the University of Calgary, and his team are hoping to develop a provincially funded screening program for lung cancer.
Photo by Ewan Nicholson

Brian Wyllie of Stavely, Alberta, comes from a family of smokers. The retiree is the oldest of eight children; all smoked but one. Both of their parents smoked and died of lung cancer. Wyllie, 69, has smoked since the age of 15, and was up to a pack a day when he did something back in the summer of 2010 – a simple something – which, quite literally, saved his life.

It is estimated that with screening, 80 per cent of lung cancers can be found at an early stage and will be highly susceptible to treatment.

One day, while reading the newspaper, he noticed that the organizers of the Pan-Canadian Early Detection of Lung Cancer Study were looking for long-term smokers. Wyllie – who was healthy, except for “smokers’ cough” – fit the bill, so he phoned to register as a candidate in the study.

Through the study he met Dr. Alain Tremblay, the respirologist in charge of the Calgary site (there are seven of them across Canada), and went through the introductory protocol – gathering family history, blood and urine samples, weight and height information, blood pressure readings and undergoing an X-ray, CT scan and a bronchoscopy (which scopes the lungs and clips sample cells for biopsy). The results were all-clear.

But six months later, a follow-up CT scan found a “change in a spot” on his right lung. Wyllie had now entered an exclusive club which no one wants to be a part of – he was one of 43 Albertans that day to be told he had cancer.

Hearing you have lung cancer is a particularly daunting message. It is the leading cause of cancer death in both men and women in Canada; only 15 per cent of people diagnosed with lung cancer remain alive after five years because, by the time symptoms typically appear, the condition is advanced and treatment is mainly palliative. Smoking is the major cause of lung cancer, followed by radon exposure (this gas comes out of the ground into all our homes) and, to a smaller degree, by asbestos (people in the plumbing, construction and electrician industries are particularly vulnerable). The risk is also higher for people with chronic obstructive pulmonary disease (COPD).

Currently there is no national screening program for lung cancer. But Tremblay and his colleagues are out to change that. It is estimated that with screening, 80 per cent of lung cancers can be found at an early stage and will be highly susceptible to treatment. In Wyllie’s case, for example, his lesion was very small (less than one centimetre in diameter), so the thoracic surgeon did a “wedge resection,” which clips out the malignant bit and a small amount of surrounding healthy tissue. There was minimal pain and minor discomfort, says Wyllie. There were a few days in hospital and no radiation or chemotherapy required.

That national study, which began in 2008 and will wrap up this fall, looked at the “best ways to do lung cancer screening,” says Montreal-born-and-raised Tremblay, 43, who is also an associate professor of respiratory medicine at the University of Calgary. Overall, 2,700 people across the country were examined, 250 of them from the Calgary region.

There were two key goals for the study. One was the testing of a “risk calculator,” which assesses an individual’s risk of developing lung cancer based on factors like age, gender, education and smoking status. The second was to develop new ways of interpreting findings to determine whether to treat or to monitor a patient. With scans, you see “lots of benign stuff,” says Tremblay, noting if you are not careful, it could result in unnecessary and invasive testing and anxiety. And, although a sizeable lesion is significant, its location and shape is equally critical. Perhaps it is a slow-growing spot (estimated to be the case in up to 15 per cent of lung tumours), and re-scanning at three-month intervals might be the best recommendation. A “lung nodule calculator” was also developed, to determine the risk of a nodule being malignant. “It is a much more accurate way of deciding what is a positive scan and what is not,” says Tremblay. “Using this calculator we can reduce false positives from 25 per cent to five per cent.”

Although the national work is ending for Tremblay, he won’t be without opportunity. The ACF recently announced $2.3 million in funding for a five-year provincial initiative to follow up on the work done nationally. Tremblay, one of the 14 professionals and the team lead for this next phase of research, is very pleased. “We don’t want to lose our expertise or momentum,” he says. 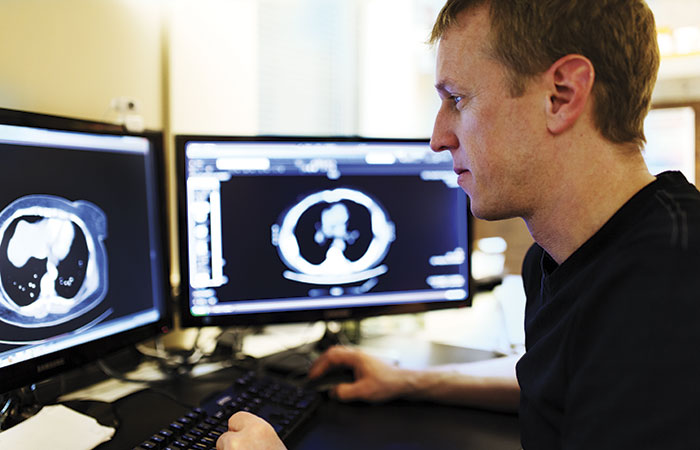 STUDY SUBJECTS: It is estimated that 150,000 people in the province would meet high-risk criteria for lung cancer, and about half of those are expected to participate in a provincially-funded screening program which will follow up on existing national research, led by Dr. Alain Tremblay.
Photo by Ewan Nicholson

The ultimate goal for the next phase of research is to develop a provincially-funded screening program (it is estimated there are 150,000 people in the province who would meet high-risk criteria for lung cancer, and about half of them are likely to participate), similar to mammograms for breast cancer detection – hopefully beginning in year three or four of the program. Until then, approximately 800 high-risk Albertans will contribute to research by receiving X-rays or low-dose CT scanning (with six to eight times less radiation than traditional CT scanners) over the study timeframe.

“Don’t smoke. Then we won’t need this program. I’ll be out of a job,” says Dr. Alain Tremblay.

In the first few years, the initiative’s emphasis will be on learning how to build a screening program on a large scale. Information technology infrastructure will be built to manage activity (screening bookings) and correspondence, such as sending scanning results and requests for follow-ups to patients and doctors automatically. Currently, this is managed on an ad-hoc basis. The team will draw on the already-existing framework for breast cancer screening for modelling opportunities.

They’ll also look at resource implications, like how many CT scanners, lung-function testing labs, nurse practitioners and thoracic surgeons will be needed. “If we have a screening program, we’ll need twice as many [surgeons] in Alberta,” Tremblay says.

The lung nodule calculator, developed in the national study, has already proven its worth on previous studies, but its efficacy will continue to be tested going forward over the next five years.

A sub-study will look at people who have been exposed to asbestos and are at risk for cancer of the lung lining (mesothelioma), especially if they smoke. In this case, the emphasis will be on assuring individuals that they don’t have the condition, a different approach to screening. High-risk individuals will likely be subject to CT scanning, and low-risk individuals, to a blood test which has been found to be “promising” in detecting this type of cancer.

Since half the people who have come for screening to date are still smoking, “it is also critical that we help them quit,” says Tremblay. “What is even better than detecting lung cancer early is when it never occurs.” There will be a program, in conjunction with Alberta Quits, to assist study participants who are still smoking, with cessation.

They will be provided with nicotine patches, pragmatic strategies and counselling, all with the hope that they’ll butt out once they are determined to be at risk. The screening environment might just provide the perfect opportunity to quit, once and for all. With a targeted screening program, there will be more people hearing “you have cancer,” Tremblay says. But, with an effective screening program, that message will come much earlier on and yield a much more positive result. The Alberta Cancer Foundation has recently launched Campaign 43 to increase awareness and to encourage Albertans to embrace cancer prevention strategies and healthy lifestyles.

Tremblay’s message to Albertans: “Don’t smoke. Then we won’t need this program. I’ll be out of a job.”

Wyllie echoes that message. In fact, he quit smoking in November 2013. That was after the national study follow-up screening protocol found yet another suspicious lesion, this time in his left lung. Again, he had the wedge retraction procedure and spent a few days in hospital. Upon his return home, he used a breathing machine, called an incentive spirometer, to prevent pneumonia and strengthen his lung capacity.

Wyllie is scheduled for an X-ray in May 2014 and, if everything is fine, he’ll have annual X-rays (his doctors are not recommending more CT scans, unless something else looks concerning, as he has been exposed to considerable radiation to date).

In the meantime, he is celebrating – making that initial phone call, participating in a ground-breaking study, finding his cancer early and getting good treatment. He is back to puttering with his antique cars and inventions. And now that he is no longer smoking, he is also able to savour that basil in his meat sauce. “It is wonderful. I’ve got my sense of smell back.”

Signs and Symptoms of Lung Cancer

While it’s possible to develop lung cancer and not show any signs, or display these warning signs as a result of another medical condition, it’s a good idea to seek medical advice if you’re experiencing any or all of the following symptoms. They could be indicators of possible lung cancer.

FIND OUT MORE: For more information about the provincial study, email lung.screening@ucalgary.ca.