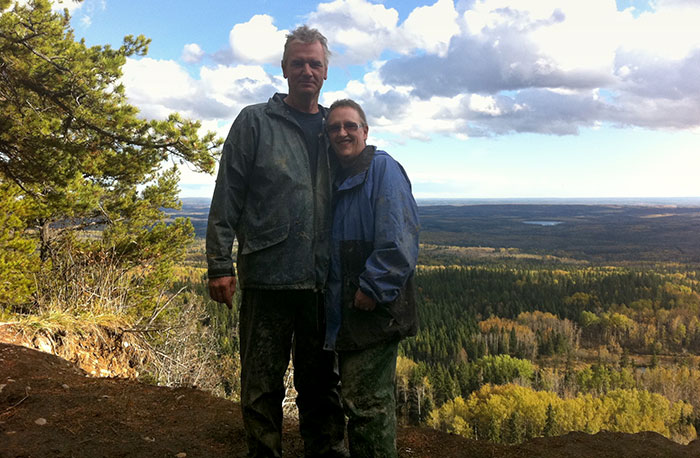 Within hours of meeting Wes, Jodi knew he was her soulmate. Their first date was a blind one, at a drive-in movie theatre with the couple who introduced them. After their second, Jodi told her mom she’d one day be Mrs. Mantey. They had two children, Trevor, then Crystal. They had a home and careers.

Then, in 1996, with Trevor still in Grade 4, the Manteys’ world changed. “We were out camping with family friends that June,” Jodi says. “We went for a walk and I felt something rubbing against my left arm. The following Monday I did a breast exam and found a lump. As a young mother of two kids, I was terrified.”

With a biopsy scheduled for August, Jodi spent the summer waiting. She continued her 18-year career with Telus and did her best to keep it together as a wife and mother, while the Big C hung in the back of her mind. By August, the surgeon was optimistic. When he removed her stitches, Jodi asked if she should bring Wes to hear the results, and the doctor said no. Jodi was alone when she got the diagnosis: malignant.

“The first person I told was my mother-in-law because I wanted her to take the kids so I could talk with my husband. We had decisions to make,” she says.

“You’d think, because it’s cancer, going to the Cross would be sad, but it’s not. You laugh and make friends.”

A mastectomy and six months of chemotherapy followed – a scary scenario made more difficult by having to explain to her children why their mother is sick, and going to get sicker, in order to get well. “We got so much help from the Cross Cancer Institute, even outside of the actual treatment,” Jodi says. “Before we broke it to our kids, we talked to people at the Cross, and they gave us a book talking about how chemotherapy is like soldiers in a body, fighting off bad guys. We used that analogy to help them understand.”

Two years after her diagnosis, Jodi and Wes sold their house and bought a farm on Long Lake, a retirement dream they’d had since they married. “We went from a 1,900-square-foot home in Edmonton to a 700-square-foot farm house in the bush,” Jodi says. Telus gave her a severance package, and Wes found local contracting jobs – a drastic change, but the right decision, she recalls. “At first it was tough giving up the money, but it was worth it to come home, sit on the deck, look out at the lake and enjoy our family. We bought a couple two-seater quads, and that became our passion. Every Sunday morning, we’d jump on and go, for eight hours from our backyard, without even going on someone’s private land. We just enjoyed life together.”

In 2010, Jodi started having stomach problems and had her gall bladder removed. The issues didn’t go away, however, and just after Christmas, Jodi found out she had stage four pancreatic cancer, unrelated to the breast cancer. It took time to find a surgeon capable of the extremely risky procedure that removed her pancreas, spleen, two-thirds of her stomach and part of her bowel. After more chemo in Hinton, Jodi had another CT scan at the Cross Cancer Institute. What originally looked like scar tissue ended up being her worst fear: the cancer had spread.

There were a few options. Jodi could opt for treatment that would improve her quality of life but would not extend it. Or, she could undergo an aggressive chemotherapy, that would make her sick.

“We had a week-long trip planned to Mexico, and the doctor said I should go because it would probably be my last vacation,” Jodi says. “We decided to take a month and go away together, to make more decisions. It was wonderful – we walked beaches, talked about our life together and decided we would fight it with the most aggressive chemo they had.”

At the time, Jodi didn’t want to know how long the doctor expected her to live, so she left the room when he told Wes she’d be lucky to see another Christmas. Three Christmases later, Jodi is living three months at a time, checking regularly for the cancer that, for now, is dormant. But she’s not. In 2012, she helped organize the first annual Shining Bank Trail Ride for the Cure, a two-day trail ride between Edson and Whitecourt and benefitting the Alberta Cancer Foundation. “People bring their own horses, and teamsters bring wagons to carry passengers. We ride during the day and have a barbecue on the Saturday night, which a lot of locals come out for,” Jodi says. “In 2013, we tripled the participation and doubled the money – just over $12,000 from 35 participants.”

Thirty per cent of the money goes to the Hinton Cancer Centre; the rest helps fund special projects at the Cross Cancer Institute, including the revolutionary Linac-MR machine. For Jodi, it’s the perfect way to appreciate nature and give back to the Institute. “Everyone at the Cross – the doctors, the nurses, the lab techs – is so warm. You’d think, because it’s cancer, going to the Cross would be sad, but it’s not. You laugh and make friends,” Jodi says. “And throughout all of my chemo, a week did not go by that I was not on the back of that quad with my husband. Even when I was really sick, and I could only go for a short trip up the trails, I would wrap my arms around him and ride. You find things to pull strength from and make you feel at peace.”

Steering Towards a Cure