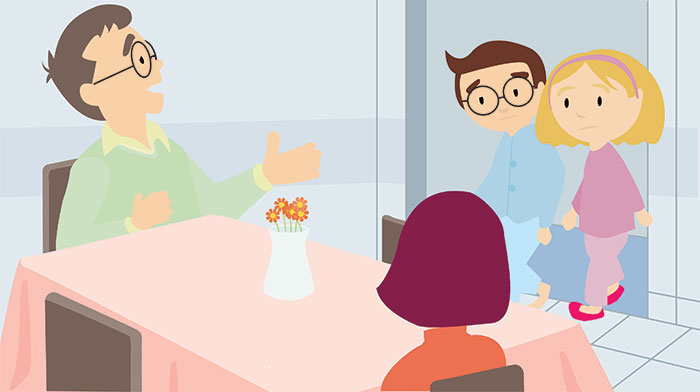 Cancer is a touchy subject. Almost taboo for some to bring up directly with a person they know who was diagnosed with the disease.

Not knowing the right words to say, or avoid, can make loved ones, friends and co-workers decide to steer clear from talking about the subject altogether. But it actually does the cancer patient a disservice if they don’t talk about their disease, suggests Dr. Guy Pelletier, clinical psychologist at Calgary’s Tom Baker Cancer Centre and adjunct assistant professor for the department of oncology.

“I have seen patients in the past try to keep the information away from children and family,” Pelletier says. “Then the situation goes from bad to worse.” Physical evidence of surgery or long absences from work make the secret impossible to keep and those close to you feel hurt they weren’t told.

“Parents should be as honest as they can be in terms of talking to the children and telling them what is happening.”

Some parents may initially feel they are protecting their children by not telling them about Mom or Dad’s cancer diagnosis. “I’ve often told patients that a child’s imagination is far more cruel than reality,” Pelletier says. “Whether it’s the appearance, behaviour or time a person spends in bed, children will notice all of that. If the parents do not discuss the disease with the children, then the children will invent their own ideas of what is really going on.”

Of course, he says, a conversation with a four-year-old will differ than one with a 14-year-old – the simplicity of the language will vary – but the two main messages parents must express to their kids, regardless of age, are the same: the cancer diagnosis is not the children’s fault and the children are not responsible for getting Mom or Dad better.

“Parents should be as honest as they can be in terms of talking to the children and telling them what is happening,” Pelletier says. “Older children may ask for more detail about the nature of the disease and implications in terms of how much treatment is needed. It’s a matter for the parents to exercise a certain amount of judgment.”

He does advise that both parents make sure they are on the same page of what they want to tell the children, if by chance both aren’t available to sit down and answer questions together. Secrets, at a time like this, are not advisable.

It’s also a good idea for adults close to the child of a cancer patient – teachers and sports coaches, for example – to be informed of the parent’s diagnosis. “When children are distressed, it will show in environments like school or sports,” Pelletier says. “So if the child mentions something or presents behaviour that might indicate distress, the teacher or coach will know what that’s all about.”

Pelletier’s role as a psychologist is to help people who are diagnosed with cancer throughout the treatment and survivorship and he sees how the shock, fear and disbelief affect the whole family. He extends the invitation to family members of the patient to take part in group discussions about the disease and what options lie ahead.

He says it’s best for close family members to honour the wishes of patients and let them decide who will be their sounding board. Some patients choose to even keep the health-related conversations amongst professionals to avoid awkward responses or upsetting their loved ones.

In the workplace, if the news becomes publicly known, it’s usually because the patient has purposely told colleagues and is prepared to acknowledge he or she has a disease. Many patients reiterate the phrase: “You never know who your friends are until you are diagnosed with cancer,” Pelletier says. An unexpected flip-flop occurs with acquaintance-like colleagues stepping up and close ones distancing themselves.

For a co-worker who doesn’t know the diagnosed colleague very well, Pelletier says, “Acknowledging the event and giving the person an indication that you’re prepared to be supportive is a good thing and probably sufficient.” Pushing for details or ignoring evidence of discomfort and hesitancy is not exercising good judgment, which is crucial when discussing cancer, he adds.

A direct supervisor will likely be the first to hear the news in the workplace because many times a patient will have to go on sick leave soon after a cancer diagnosis. Pelletier says he’d hope a patient would hear supportive phrases from his or her boss including: “We are terribly sorry to hear that. How are you? Don’t worry about the job, worry about getting better.” If not those exact words, the supervisor should be able to explain how the employee can access short-term disability quickly.

“Health, to a large extent, is a personal issue,” he says. “When we talk about the dos and don’ts, it depends a lot on where people’s level of comfort is. Judgment is always necessary.”