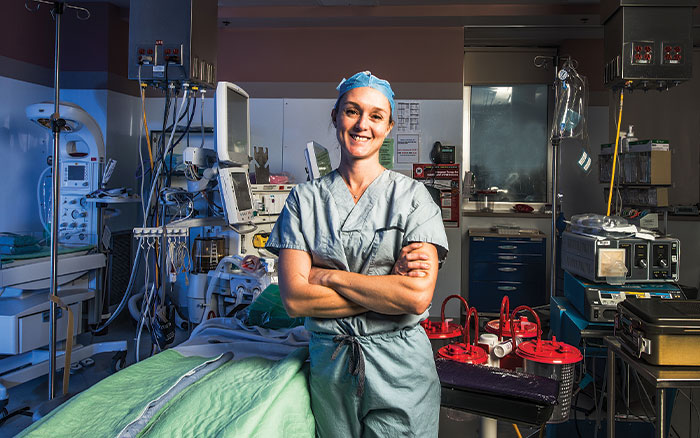 SLEEP DOCTOR: Neuroanesthesiologist Melinda Davis prides herself on the connections she makes with patients pre-surgery.
Photo by Brian Buchsdruecker

Most medical professionals are recognized for their hard work, but there are exceptions to the rule, especially when talking about neuroanesthesiologists.

“Nobody really knows much about anesthesia in the real world,” says Dr. Melinda Davis, a neuroanesthesiologist at the Foothills Hospital in Calgary. “If we’re good at our jobs, nobody remembers we were there.”

Davis took her first year of medicine at the University of Newcastle, in Australia, right out of high school at 17. She completed her medical degree, a few internships and anesthesiology training before applying for a fellowship in Calgary in 2004.

Mapping involves a patient talking while the surgeon electrically stimulates the brain in search of “eloquent areas” that affect things such as speech.

It was 10 years ago that Davis, 40, started at the Foothills Hospital in a neurosurgery fellowship position led by Dr. David P. Archer – a mentor of Davis’s who recently retired from practice at the hospital. She said it was Archer – “a very smart man with a high profile in neuroanesthesiology” – and the Rocky Mountains that inspired her to travel more than 13,000 kilometres for neuro-specific anesthesiology training and research. Archer, and the Rockies, became key factors in why Davis didn’t return home as planned when her year-long fellowship concluded.

“One of the reasons I chose anesthesiology was that I remembered having my wisdom teeth out when I was 18,” Davis says. “I felt like I was in a production line, like I was being treated by robots. Nobody made a personal connection.”

Today, she makes a point of standing where patients can see her as she administers drugs to put them to sleep for the surgery. “I appreciate that they’re terrified,” she says.

The low profile of anesthesiologists makes their job slightly mysterious. It’s true they set up your IV, administer drugs to put you to sleep and help you count backwards until you drift away for hours in surgery. But the not-so-common duties of an anesthesiologist include taking a patient’s thorough medical history before surgery.

“It’s to make sure that they’re ready and there’s nothing that would prevent them from safely going through the operative process,” Davis says. For more elective surgeries, a patient’s history can be reviewed weeks beforehand so further tests can be done, if required, and adjustments made to medications, if needed. For cancer surgeries, or non-elective surgeries, a shorter time frame is available to optimize the patient’s overall health beforehand so Davis’s first patient meeting may then be the morning of a surgery. 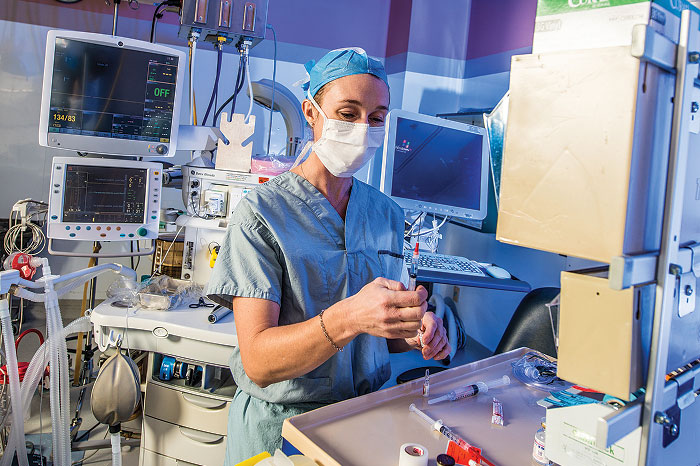 MASTER TEACHER: Melinda Davis divides her time between the OR and the classroom.
Photo by Brian Buchsdruecker

This means Davis remains in the operating room for the whole procedure, monitoring carbon dioxide levels, for example, making small adjustments to the IV and keeping a dialogue going with the surgeon to alert him or her of any evident stress the patient may be experiencing.

Dr. Yves Starreveld, a neurosurgeon at the Foothills, has worked with Davis since he started there in 2006. “The problem with neurosurgery is that the patient needs to wake up quickly afterwards because you want to know if you’ve done some damage to them,” he says, noting that Davis is able to do this effectively and efficiently.

Starreveld says Davis’s combination of “real competence” to address any surgical issue, such as an airway blockage, and willingness to happily chat with an awake craniotomy patient for hours, makes his job easier. He’s able to focus on the surgery. “She manages everything from airway to circulation, heart rate, to blood pressure – fully keeping the patient alive when I’m doing what I’m doing.”

Brain surgery on an awake patient still amazes Davis. “We make them kind of sleepy to get them into position and to get the skull open, then we let them fully wake up while the surgeons map out the areas they don’t want to resect,” she says.

Mapping involves a patient talking while the surgeon electrically stimulates the brain in search of “eloquent areas” that affect things such as speech. These areas differ in patients due to their level of education and number of languages spoken. When the areas are located, a tumour can be safely removed without affecting speech or motor areas in the brain.

After an hour or so of doing basic math out loud, many people would go batty, so Davis semi-interviews patients to get them talking about more interesting things for however long it takes to map their brains.

“I feel like I should write a book: Awake Craniotomy Patients I’ve Known,” she says.

The awake surgeries are the most exhausting and the most rewarding for her. “Of all the cases I do in my anesthetic career, those are the patients I have the most connection to because I’ve learned about the car they just bought, where they go hiking and what their mother does for a living.”

Davis admits life can get hectic as she wears a few hats at the Foothills: three days a week she does clinical anesthesia, which includes neurosurgeries, general surgeries or facilitator work as the anesthesia director of the Pre-Admission Clinic. For the other two days of her full-time schedule, she teaches at the University of Calgary Medical School (which is located in the Foothills Hospital) as a master teacher.

The Master Teacher Program was an initiative set in 2007 by the University of Calgary’s Office of Undergraduate Medical Education. It addresses Alberta’s rapidly increasing population and physician shortage by allowing clinician educators with proven teaching track records to teach within the undergraduate curriculum.

It’s unrelated to neurosurgery, but in 2012, Davis decided to take the year-long Master Teacher training, prompted by a colleague’s suggestion.
“I chose to do it because I felt that I had some skills in seeing the forest for the trees and I think that is what medical students need,” she says. “They are bombarded with an incredible volume of new information and it can be overwhelming.”

She feels her strength is similar to most anesthesiologists’: having a knack to identify the most important information thrown at them, locking that away and piecing new information together with previous learnings.

Davis can teach everything from endocrinology to cardiology in classrooms with small groups or with simulator exercises. “It has been hugely rewarding,” she says. “I suspect I have learned more than my students.”

But the many hats and surgeries can mean unpredictable days – usually from 7:30 a.m. to 3:30 p.m. “If you embark upon a case that unexpectedly takes longer than planned, which is the nature of this job, you can’t just leave,” she says. An average craniotomy takes six to eight hours, but some go for 12. When work needs more of her time, she’s thankful that her four-year-old daughter’s nanny has the flexibility to start early or stay late.

And, “thank God for hobbies,” Davis says. Having the mountains only an hour away is a treat this avid runner takes advantage of as often as possible. In fact, she’s currently training for Wyoming’s 50-kilometre ultra marathon in May. The mountains are a pleasant reminder of what led Davis here – and kept her here unexpectedly – for the past decade.

Did You Hear That?

Top Job: Bringing it All Together