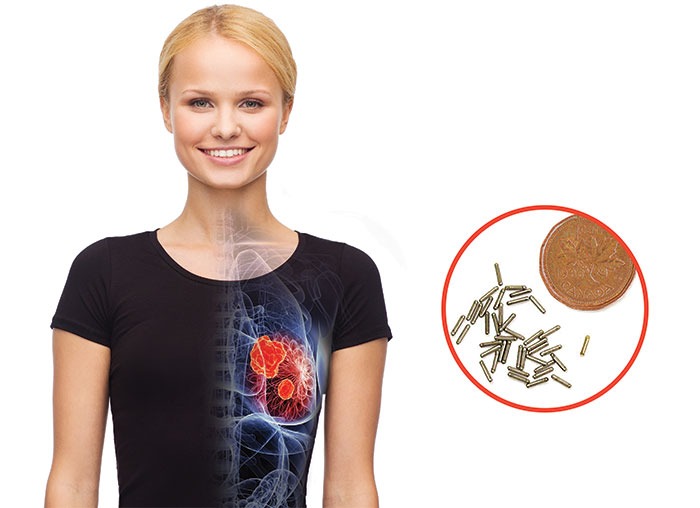 News that cancerous cells have been found in your breast can, on its own, be difficult enough for patients to bear. Add to that weeks of draining and relentless, but life-saving radiation therapy likely to follow surgery, and it can be overwhelming.

But an innovative and effective new option called breast brachytherapy now available at the Tom Baker Cancer Centre in Calgary reduces radiation treatment from up to seven weeks to a one-day followup surgery, and promises to improve patient comfort with minimal impact on their life.
Last summer, Calgarian Doreen Thomson underwent a routine mammogram, which revealed abnormalities in her left breast. When a biopsy showed
something grim – carcinoma in her milk ducts – the news blindsided the 59-year-old and her family.

“It was tough on my husband and kids,” says Thomson, who had attended the followup appointment solo to receive the outcome of the biopsy. A self-described upbeat, high-energy lady, she breezed into the clinic assuming medical staff would share routine and normal results.

“I had 22 needles, and 93 of those seeds put in on a Tuesday. I took off the rest of the week and went back to work the following Monday.”

But Thomson found herself emotionally broken upon hearing the news and comprehending the next steps. Although detected early, and among the most treatable, surgery was urgent given that her cancer was known to be a fast-spreading type if not contained. “If it escaped out of the box, it would go like wildfire,” says Thomson.

Thomson’s husband was on a business trip, and her panicky phone call caused him to backtrack from Saskatoon down the highway without delay to comfort her. “My daughter was hysterical. My husband dropped everything to come screaming back here,” says Thomson, a mother of two adult children and celebrating 40 years of marriage this year.

In less than a month after the diagnosis, Thomson received a lumpectomy to remove the tumour, and she steadied herself for followup radiation treatment that would span up to seven weeks, and potentially leave her with a host of side-effects.

“My doctor – who doesn’t mince words – told me to brace for hell,” recalls Thomson. A finance manager at a Calgary dealership, she planned to arrange with her employer to take time off for dozens of appointments.

But she was spared the ordeal when oncologists offered Thomson a chance to take part in an innovative surgery that was possible thanks to a group of committed Alberta Cancer Foundation donors that rallied together to raise $252,000 in funds to purchase the equipment.

Called breast brachytherapy, the treatment increases the quality of life for breast cancer patients, with a single procedure that involves permanently inserting a set of radioactive seeds into the void where lumps are removed via needles.

“The procedure will leave a needle mark like when you get blood taken, but heals up quite nicely,” explains Rosie Moore, a radiation therapist for 31 years at the Tom Baker Cancer Centre in Calgary.

Radiation oncologist Dr. Siraj Husain says breast brachytherapy offers many patient benefits. “By not using radiation beams, skin reaction may be reduced, as will the impact of radiation using other organs, including the lungs and heart,” says Husain. “The chance of the breast shrinking or changing shape is also diminished. It also means patients can avoid daily trips to the hospital over the course of many weeks for traditional radiation treatment.”

Made from the chemical element palladium, the seeds kill cancer cells from within, with minimal impact to surrounding tissues. They remain in the breast but lose radioactivity after about six weeks.

Traditional radiation treatment that follows a lumpectomy procedure would normally see patients like Thomson receive a blast from an external radiation beam five days a week for nearly two months.

Thomson knew treatment would be necessary for survival, although a disruption to her life. But she was frightened by the fact that scatter radiation from beam therapy could cause burns to the entire surface of the breast, plus adversely impact nearby organs such as the lungs and heart.

“After reading up on it, it kind of scared me. With the scatter radiation you can be looking at hardening of the breast, a lot of shrinkage and huge discoloration. Some people develop coughs,” she says.

“I had 22 needles, and 93 of those seeds put in on a Tuesday. I took off the rest of the week and went back to work the following Monday,” says Thomson. Medical staff juggled schedules to immediately begin honing their skills with the newly installed-equipment to prepare for Thomson’s surgery. A similar method has been in practice to treat prostate cancer.

Oncologists at the Tom Baker Cancer Centre will perform this innovative breast cancer treatment on 20 low-risk patients as part of a study, says Moore. “The study has been in place since eight years ago in Toronto, so we have a track record of what is going on as a result. They have seen the same cure rates as external beam therapy treating the whole breast,” she explains.

“It is effective, and with the installation of the new equipment, it could be a standard of care over time,” she says.

The procedure was pioneered at Sunnybrook Health Sciences Centre in Toronto where the world’s first permanent breast seed implant was performed in 2004. Only patients with tumours smaller than three centimetres and who are considered low-risk qualify for the procedure, and those who receive the treatment sign a consent form to join the study.

“I am a little bit raw but for the most part I felt OK,” says Thomson, adding within 10 days of the treatment she went with her husband on an 11-day road trip to Yuma, Arizona.

Six months after the surgery, Thomson is expecting doctors to confirm she is free from cancer, but in the interim, she has seen mild irritation from the active radioactive seeds, as they begin to surface from the inside out.

For Thomson, the continuous followup prescribed over three years throughout the study means she gets welcome attention to her wellness and an opportunity to add to the treatment options and knowledge for other Canadians. “Compared to the alternative, it’s a no-brainer,” says Thomson.