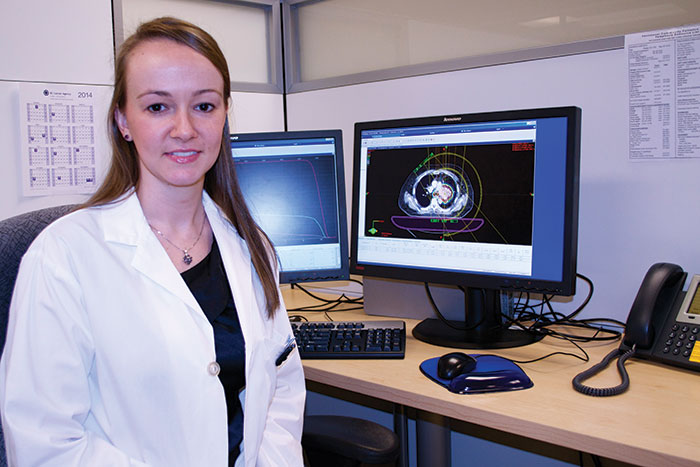 Dealing with patients in palliative care is one of the hardest things an oncology team has to do, and learning the skills to handle it well can mean stepping outside of the classroom.

That’s the premise behind the Multidisciplinary Summer Studentship, a six-week ongoing program to which Shilo Lefresne was one of two inaugural students. It was 2008 and she was 25, and between her second and third years of medical school at the University of Alberta. The course, which took place at the Cross Cancer Institute, was an elective program. But it was one that greatly influenced her.

“I think it reaffirmed that the end-of-life process is an incredibly important time in people’s lives,” says Lefresne, who’s now 30 and finished med school. “It tends to be something taboo in our culture and it highlighted that this is important and – if discussed early in someone’s disease trajectory with a team, with the family members involved – it is something you can prepare for and try and make as comfortable a transition as possible. It can be something that isn’t necessarily a terrible process.”

Studentship participants, who must have completed at least one prior clinical term, learn how to work as a team with cancer patients and families. Summer was chosen so students could focus on the studentship without other course work. Participants shadow mentors on multi-disciplinary health teams, and are required to write a paper reflecting on the experience at the end.

Now in her fourth year of a residency at the B.C. Cancer Agency (BCCA) and a student in oncology at the University of British Columbia, Lefresne says she had some interest in palliative care and oncology as an undergrad, but the studentship firmed her goals. “I worked with medical and radiation oncologists as well as palliative care physicians, so the biggest learning from that was appreciating how each different medical specialty would interact with a patient with a cancer diagnosis,” she says. “For me at that stage of my medical school training, it was important.”

Dr. Alysa Fairchild is a radiation oncologist at the Cross Cancer Institute and associate professor in the University of Alberta’s department of oncology, who oversees the studentship, and was also responsible for helping create it. “It’s important to show students how teams work, both the advantages and the challenges, but also more importantly, we really tried to give students the opportunity to see the cancer journey through a patient’s eyes – which sometimes can get lost in our trying to master our discipline-specific knowledge,” says Fairchild.

Wayne Sartore donated $100,000 toward the studentship in honour of his wife, Linda, who died of cancer in May 2009, after receiving what he calls “invaluable care” from her medical team at the Cross Cancer Institute. “As we were getting to the later stages with Linda, and our experience primarily with Dr. Andrew Scarfe, it became clear we wanted to do something that we personally believed in – something that would support the development of young medical professionals in the area of bedside manner, doctor-patient relationship, the understanding of what families are going through when they face cancer and certainly terminal diagnoses,” he says.

“We summarized it, saying ‘we’d like to clone a lot of people like Dr. Scarfe and Dr. Fairchild.’ ”

Now future doctors, pharmacists, social workers, occupational, speech, and respiratory therapists, nurses, and nutritionists will have a chance to weigh in on patients’ end-of-life care through the studentship. So far eight students have participated, two at a time, but Fairchild still recalls the first fondly. Fairchild says she was so impressed by Lefresne, the pair has collaborated on two more papers since. “It’s really the start of an ongoing professional collaboration, which I appreciate as well.”

The importance of the experience is not lost on Lefresne, who plans to do a fellowship in the same field as Fairchild, something she has set up in Australia for next year. Afterwards, she hopes to return to Canada to continue her medical career in rapid access palliative radiotherapy.