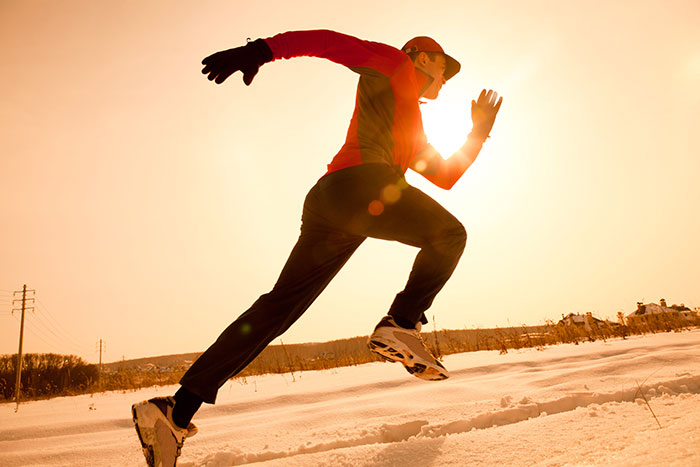 It’s easy for your motivation to go into hibernation when it comes to exercise in mid-winter. But there are many runners who refuse to let the season slow them down. Well, it might slow them down or slip them up, but it doesn’t deter them from getting out and running.

For some dedicated year-round runners, the prospect of roughing the brutal cold makes winter prime time to pound the pavement, ice-covered or snow-packed though the trails may be. Steve Sweeney is one of those runners. He slips out several mornings a week while his family sleeps and before the sun is up to hit the running in any season.

It’s easy for him to warm to the idea of running in the cold. “I like the challenge of getting up, getting out – it feels like I have accomplished something before I even start,” the 45-year-old father of three says of winter runs. “Some mornings are cold and dark; it’s hard to get moving, but once you get warm, there is no better feeling. When you come inside and have that hot shower, it’s a very simple pleasure but it sets the day up. You feel energized, relaxed and ready for the day.”

Know your route well, especially as far as footing goes, and check out which way the wind is blowing – it’s best to run into the wind on the way out and with the wind at your back on the homerun half.

It doesn’t hurt that most bike paths in Calgary are well-maintained and typically dry and bare year-round despite what Mother Nature doles out. And thousands of kilometres later, Sweeney has yet to bore of the scenery offered by the great outdoors. “Anything along the river is just so beautiful,” he says.

Gord Hobbins, owner of Gord’s Running Store, says preparation is key for anyone planning to step out for a winter run. Know your route well, especially as far as footing goes, and check out which way the wind is blowing – it’s best to run into the wind on the way out and with the wind at your back on the homerun half.

To dress for success when running in the cold, think layers, layers, layers. Starting at the top; pick a toque or a balaclava or maybe, if you have a lot of hair and it’s not too cold, put on a head band. A tube neck warmer is versatile and can be pulled up or pushed down as the weather dictates.
When it’s -15°C or colder Hobbins suggests putting a thin layer of Vaseline on the face – even the earlobes – to create a synthetic barrier against the cold. And if it dips down to -20°C, cover up the nose and mouth. “I think the critical temperature is -21°C,” Hobbins says. “You could run the risk of damaging the breathing tubes.”

Men should consider special underwear with a nylon panel meant for winter running to protect “the boys.”

“It could be worth its weight in gold,” he says.

There are similar products, so-called bum huggers for women, which keep the tush toasty, he adds. Then pull on the next layer, a sweat-wicking, long-sleeved top and tights. “In recent years there has been a massive upsurge in merino wool,” he says. “It is warm and pulls moisture away but the biggest advantage is it doesn’t absorb body odour. A lot of guys like it for the low-maintenance factor. It doesn’t stink and you can get away wearing it a few times.” The “crème de la crème,” brand is Icebreaker from New Zealand but there are other companies that make merino wool clothing.
Expect to pay about $90 and up for tights and $80 and up for tops. Add a windproof jacket and pants and if it’s cooler than -20°C, put a second layer between the base layer and the jacket.

Hobbins says regular running socks should do (as long as they cover up the Achilles tendons and ankles). Thicker ones can make it difficult to fit feet into sneakers.

Typically, regular running shoes are adequate but there are ones with studded-type tread and shoes with studs or studs that can be screwed into sneakers for those venturing out onto particularly icy terrain or packed snow surfaces, adds Sean Rickard, manager at Edmonton’s Fast Trax Run & Ski Shop. 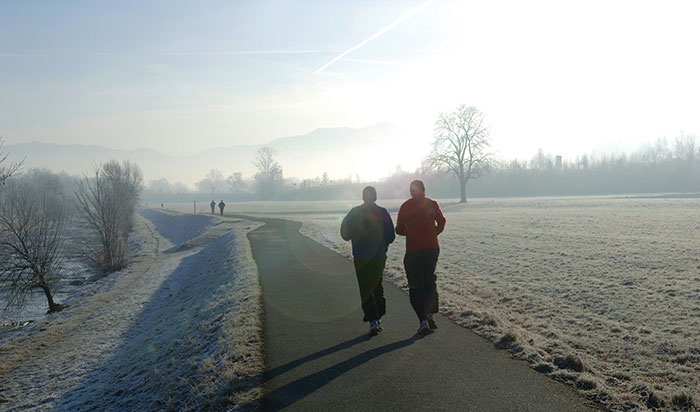 As for hands, Hobbins says mitts might be a better option than gloves because the fingers can “keep each other warm,” and he advises making sure the elastic around the wrists is not too restrictive. Meanwhile, reflective arm-bands, flashers or light clips, which can be attached to clothing or shoes and range from $6 to $25, ensure runners are visible, and wearing just one earbud means a runner can still hear hazards, be it an oncoming train or bell ringing cyclist.

For Hobbins, who organizes the annual Frozen Ass Fifty (yes, that’s 50 kilometres in February), the cut-off for an outdoor run is about -20°C, a temperature which sends him searching for warmer climes. “The last resort is the treadmill,” he says. “It’s the same place, the same pace; you are looking at the same wall. There is no variety to it.”

Outdoors, on the other hand, is the way to go whenever possible, he says. “It’s invigorating. I’m an outside guy – whatever Mother Nature throws at you.

“Maybe, at some point, I will throw in the towel and do the hamster-wheel type training, but I like the challenge of sticking it out outside. I just enjoy seeing the variety – the different terrains, the different parks at different times of year.”

He has seen outstanding sunrises, savoured sights of coyotes and spotted deer on Nose Hill and on a Christmas Day run through Calgary’s Confederation Park he was even treated to the rare sight of 20 or 30 robins, who had chosen to stick around for the winter season. “If I was on a treadmill, I wouldn’t have seen that,” he says.

Edmonton’s Rickard says the very elements which might deter some fair-weather runners are what entice others. “The cold is one of the attractions,” he says. “I just like being outside in the cold, still air. It’s peaceful.”

Some tips on hitting the trails in the snow or ice, from Alan Cooper, sales associate with Strides Running Store in Calgary:

KNOW BEFORE YOU GO

JOIN THE CLUB: Running groups and sites: In Calgary and Edmonton: 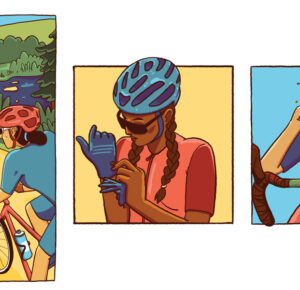 Expert Tips To Help You Prepare For Long-Distance Cycling Events