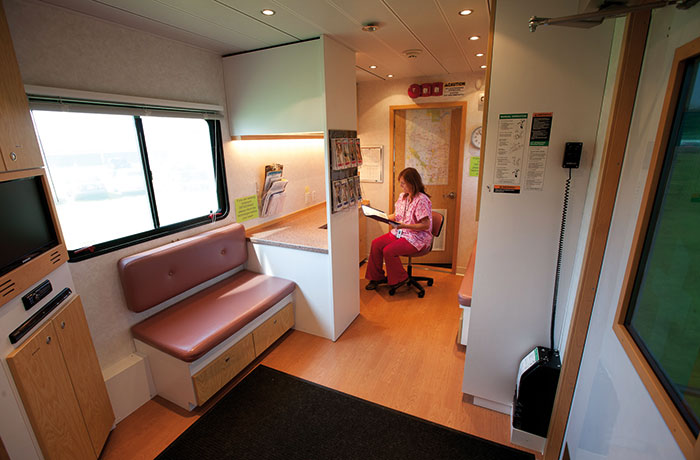 Parkland Fuel Corp. is a company whose roots are firmly planted in rural Alberta. So its move to get involved with the Alberta Cancer Foundation, donating fuel to Screen Test, a program that brings remote screening to women who might not otherwise get a mammogram, just made sense.

“We started in small towns; our strength is in small towns rather than the urban centres, so we looked at the opportunities to give back and do charitable work in rural communities,” says Peter Kilty, vice-president of Retail Services for Parkland Fuel Corp., parent company to Fas Gas. “This just seems like a perfect match to who we are and what we value and stand for, and it was an opportunity to help folks that are our customers.”
With its donation of $100,000 worth of diesel and gasoline since 2011, Parkland has helped power two trailers pulled by a semi-truck, housing digital mammography equipment. In addition, the company has provided gas for vehicles of staff manning the Screen Test.

“Nobody wants to hear that they have breast cancer – but it’s better to find it early.”

“To women that don’t have access to a centre that actually provides a mammography clinic, this ensures that they have access to the same type and calibre of service,” says Alberta Health Services’ Joan Hauber, manager of Screen Test. “We know that with anything like screening, it’s often done for well women. Women who have screening have no issues with their breasts; they just go in for just a regular test, like a dental checkup. We know that sometimes, particularly in some of the communities that are quite far from mammography centres, it’s hard for people to find the time, or if they’re not feeling unwell, they just put it off.”

As part of Screen Test, two 53-foot trailers have been on the road 48 weeks a year for the past three years, travelling to rural municipalities all over Alberta. The trailer units cover serious ground, too; Haber estimates that each averages 13,000 kilometres annually. “We do it all winter. And it’s even more important in winter that we keep our trailer running because if the power goes out, our equipment on board is really sensitive to cold, so we have to be really cautious,” Hauber explains. “We don’t want to only go part of the year because we wouldn’t have enough time to see all the clients.”

AHS employees who work on the initiative also log their share of mileage – technologist teams travel between their home base (either Calgary or Edmonton) and the mobile communities they service. 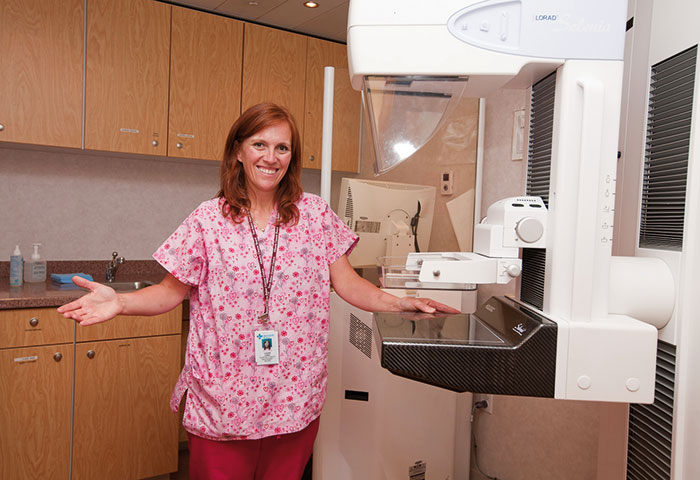 ON BOARD: Louise Leduc, a mobile mammography technologist with Screen Test, shows off the interior of one of the trailers.

The two south teams travel about 20,000 to 21,000 kilometres and the two north teams, about 30,000 to 31,000 kilometres annually. Communities served by the mobile Screen Test have included municipalities as far-flung as Cardston, Milk River, Grand Cache, Provost and High Level, and many in between. Tens of thousands of women have had access to mammograms as a result.

Though it was initially a three-year partnership between Alberta Health Services and Parkland, “Our intention would be to continue,” says Kilty of his company’s participation in the life-saving initiative.

Hauber says the fuel that Fas Gas has donated is vital to keeping Screen Test running. “We do a lot of travelling and this enables us to provide these services so women will get the mammograms done,” Hauber says. “With their donations and their help, we don’t have to funnel money from other places. Then it can be used for other areas of AHS or even to enhance Screen Test.”

The Screen Test trailers are organized like a portable clinic, with everything happening onboard. Each contains a reception area, cervical screening room, office area for technicians, dressing rooms, and, of course, the mammogram, Hauber says.

A mammogram works by creating a special X-ray of the breast, which can detect a lump months before it would be found in a physical exam. The entire process, which involves shooting four photographs digitally (two of each breast), takes about 15 minutes. The newer machines are also known for being less painful than their non-digital predecessors.

Kilty can’t laud enough the qualified staff working on Screen Test. “I had a chance to see it in action in Didsbury, and got to talk with some of the [women] who were coming to use it,” Kilty says. “The folks that put it together did an amazing job not only with the program, but, more importantly, with the specialists who work with the patients who are so passionate about it. There are lots of things you can teach somebody, but passion and caring for others is not one of them. They have the absolute greatest people, who just make everybody
feel comfortable.”

About one in eight women in Alberta will be diagnosed with breast cancer in her lifetime. Most of the cases (75 per cent) are found in women over 50, so that’s why women in the 50 to 69 age range are encouraged to get mammograms – and often. “You can’t just have it once. This is a test that you have to have every two years, and some women need it annually,” Hauber says.

The response has been positive to the mobile mammography program, Hauber says, noting she hopes the partnership with Parkland can continue past 2014. “Fas Gas has been really great to work with. It’s been a great relationship; I am very happy.”

For more information about AHS’s Screen Test, or to find out when a mobile mammography unit will be in a community, call 1-800-667-0604 or visit screeningforlife.ca.