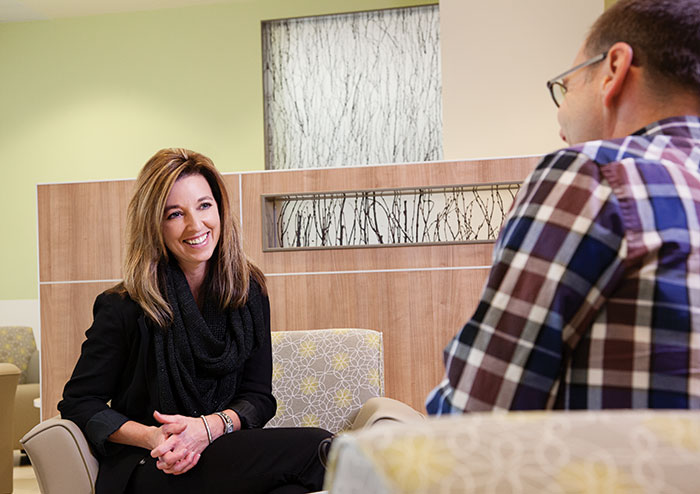 SUPPORT SYSTEM: Social workers like Tricia Hutchison help line up support for cancer patients all over Alberta through the Communities of Practice Program.
Photo By Eugene Uhuad

At a glance, you wouldn’t peg Tricia Hutchison, a wife, mother of three and social worker for Community Oncology, Community Cancer Centres, as an oncology specialist. But you wouldn’t really expect any social worker to purposely choose that specialty – it’s not a traditional path. Yet Hutchison, 44, says her field is ripe with patients in need of advocates like her: a community cancer social worker and co-ordinator for a communities of practice project, funded by the Alberta Cancer Foundation.

Communities of practice (CoP) is a social theory of learning that started to gain some fame when anthropologist Jean Lave and educational theorist Etienne Wenger published Situated Learning: Legitimate Peripheral Participation in 1991. Ultimately, CoP means that people with similar interests or professions coming together to share information and experiences with each other, purposely to develop better practices or enhance existing ones.

Tricia Hutchison’s community of practice is oncology, but it didn’t start out that way.

Following her bachelor’s degree in social work at the University of Calgary, Hutchison went back to her hometown, Drumheller, to be a social worker covering acute care, home care and long-term care patients in the town’s hospital.

An impressive team led by Dr. Tony Fields, Order of Canada recipient and University of Alberta professor emeritus of medical oncology, visited Drumheller to talk to hospital staff about the town’s future cancer centre – its purpose, benefits and details – all before it was built. Their passion impacted Hutchison who set her professional goals, right then, on cancer care.

After approximately 13 years filling various health-care social work roles in Drumheller, Hutchison and her family moved to Red Deer where she took her master’s in social work through the U of C’s distance program. She graduated in 2010. During her master’s practicum, Hutchison finally got the chance to be fully involved with oncology services.

“You can’t fix people and you can’t make them do anything. You can only help guide them to better advocate for themselves and to find a way to improve their own scenarios.”

Soon after completing her master’s, a temporary community oncology position opened in Red Deer that Hutchison was perfect for. Around the same time, an Alberta Cancer Foundation two-year Enhanced Care Grant became available for a CoP initiative. “It was the right time,” Hutchison says. “It was a concept that was being talked about more widely and commonly.”

She helped with the grant application, and when the team got it, the CoP role was tacked onto her other part-time oncology community social worker role. “All small towns don’t necessarily have supports in place,” Hutchison says, noting cancer patients don’t always have easy access to things like childcare, transportation and financial support.

The grant supported Hutchison, who was instrumental in co-ordinating communities in Alberta that met the pilot requirements: bring together local oncology stakeholders to speak about system challenges, gaps and successes all from his or her professional vantage point and do this for six monthly meetings.

Bringing together people who typically have little physical interaction can be very effective if done correctly. To do that, the CoP facilitator role becomes quite a complex balancing act, says Hutchison – noting he or she must encourage relationship building, respect all ideas and egos while keeping the group’s agenda on track. 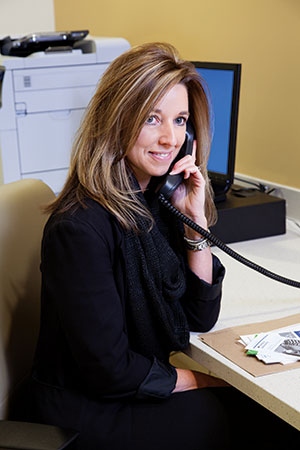 REACHING OUT: Building relationships is a large part of Tricia Hutchison’s job.
Photo By Eugene Uhuad

Three other Enhanced Care Grants were awarded at the same time as the CoP’s – patient education, screening for distress and navigation (cancer patient navigators). The four groups met to brainstorm about the best implementation methods for each initiative that wouldn’t overwhelm any staff involved.

The suggestion for CoP was to have each community cancer centre’s newly-appointed navigators to be the facilitators. (Cancer patient navigators aid people from the point of cancer diagnosis through their journey of appointments, paperwork, medication and so on.) They were already trying to develop their roles and connect with resources in their geographical area.

“There are cancer patient navigators in all of the 11 community cancer centres across the province [from Fort McMurray to High River] and in all of the four associate cancer centres: Grand Prairie, Red Deer, Lethbridge and Medicine Hat,” Hutchison says.

Three communities took Hutchison up on the CoP initiative – Lethbridge, Canmore and Drumheller – and their first meetings took place between late 2012 and early 2013.
But Hutchison doesn’t want people to know about her; she wants them to know about her program and the people who are making it work.

Among them is Lynne Ratzke, who was new to her position in July 2012 as Canmore and Banff’s community care social worker. The area’s patient navigator, Isabelle Ramsay, asked if Ratzke could co-facilitate the CoP with her. Basically, the answer was, why not?

“Each community will have unique challenges and so the idea is that they create the innovations or solutions based on their own community needs,” Hutchison explains. “It’s not someone else telling them, ‘This is your problem and this is how you’re going to fix it.’ ”

The CoP co-facilitator role worked out perfectly for Ratzke, who had moved from Calgary to Canmore for the community care centre position. “Because I was new, I didn’t know any of the services,” she says. “It was good timing.”

With a binder full of CoP literature Hutchison assembled for each community facilitator, Ratzke studied up before sending out a meeting request to locals whom she thought may be interested. “Our first meeting was January 8, 2013,” she says. “We had a group of about eight people from Canmore, Banff and Exshaw attend.”

The group went through an A-to-Z list of cancer-patient needs and paired those up with existing resources. “Now, we’ve got our ‘Resource Pathway’ for people in the Bow Valley and we know where people should go if they need daycare, if they have a financial concern, if they need psychosocial support,” Ratzke says. “You name it, we covered it.”

The Resource Pathway became a welcome and well-used “cheat sheet” for Ratzke and others in the local community cancer care centre. “It’s a fluid document to continually build on,” she says.

Ratzke reported back to Hutchison with the group’s findings after each meeting. There were occasional stalemates, which is where Hutchison coached Ratzke, and the other community facilitators, in a new direction for the next meeting’s discussion.

Everyone is keen, Ratzke says, but right before her group’s sixth meeting, southern Alberta was hit by a devastating flood late in June 2013. Community resources and time were allocated elsewhere, making the rescheduled last meeting a poorly attended one. That doesn’t mean this initiative is done with; when time permits, Ratzke expects the Canmore/Banff CoP will continue where it left off – that being, with a community member suggesting Canmore to house a satellite Wellspring cancer patient facility similar to Calgary’s.

Another gap to fill came up when Ratzke invited a Stoney Reserve home care worker to one of her CoP meetings because she wanted to understand why First Nations weren’t coming to the cancer centre she worked at. The home care worker explained that First Nations cancer patients typically go into Calgary for care, even though Canmore is closer, for a multitude of reasons. One reason is that it’s a long-distance call from Stoney to Canmore, but not to Calgary. Ratzke is looking into getting her centre a toll-free number, something she quotes Hutchison as saying would be “a real easy win.”

It took Ratzke’s group most of the six meetings to feel competent in the process and complete their first set task. Lethbridge and Drumheller were in a similar position, something that didn’t surprise Hutchison. What did pleasantly surprise her is that all three volunteer communities want to continue, even though they fulfilled their total meeting commitment for the grant program.

“It’s a simple concept, but it can be difficult to implement,” Hutchison says about communities of practice. “You’re working with people and relationships, and that is complex.”
In March 2014, the current grant funding will end. Hutchison is applying for an additional two years to implement CoP in the rest of the province’s cancer centres in community oncology, starting with Medicine Hat and Hinton, then hopefully Grande Prairie and Red Deer.

“Those communities that have implemented communities of practice, they know how to come together to improve services for cancer patients whether I’m here or not,” Hutchison says. “Any time you can pass on your knowledge to someone else and help to create a bit of passion in them, it feels like you’ve made a difference.”