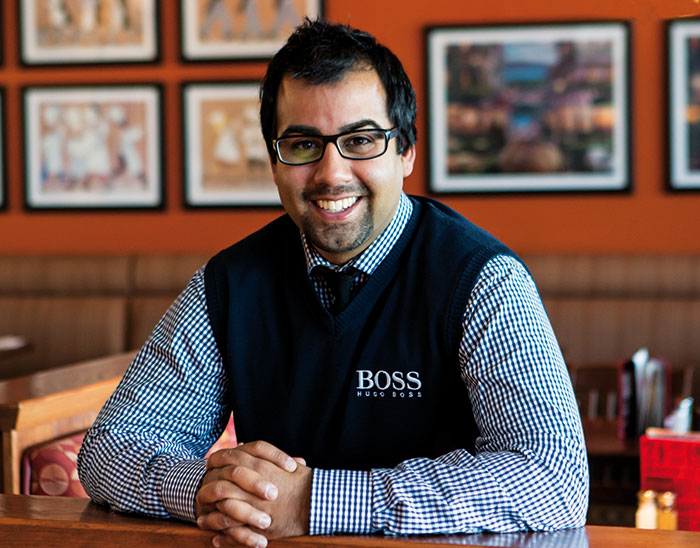 In December 2009, Faisel Shariff’s world was turned upside down when he was diagnosed with Ewings Sarcoma, a childhood cancer that showed up in his right ankle.

“I had a below-the-knee right leg amputation and went through a full year of aggressive chemo,” the 33-year-old Edmontonian says. “I was cancer-free for a year and then had a recurrence in February of 2012, when a soft-tissue tumour was detected close to the sternum near the chest wall,” he explains. “This time around I had 20 rounds of high-dosage radiation and nine months of aggressive chemo. In November 2012, I underwent eight-and-a-half hours of thoracic surgery to remove the tumour.”

November marks a year of being cancer-free for Shariff.

Shariff’s experience has moved him to support the Alberta Cancer Foundation however he can. First, he and his family personally supported the Cross Cancer Institute Golf Classic, the funds of which have helped revolutionize cancer research and treatment in Alberta.

“We are so blessed to have a world-class facility with state-of-the-art equipment and technology here in Edmonton,” he says. “This is possible thanks to the generosity of Albertans, who give with such open hearts to this cause.”

Shariff didn’t stop there. His family owns four Boston Pizza franchises in Edmonton, and over the last nine years, they have raised more than $425,000 for pediatric cancer. Together, with the larger Boston Pizza family in Northern Alberta, they have fundraised approximately $1 million in 11 years for the Alberta Cancer Foundation.

Shariff, along with his parents, his brother and family, are all involved in fundraising and supporting the Alberta Cancer Foundation.

“Faisel is a tireless supporter for us – his generosity goes well beyond the funds he raises,” says the Alberta Cancer Foundation’s Sean Capri.

This year, Shariff was one of the faces in commercials for the Cash and Cars Lottery. “I believe sharing my story with people shows that we will make a difference,” he says. “I’d do this again – any time they need a hand, I’ll be there for them.”

The Foundation has taken him up on his offer and Shariff will be on a committee to recruit participants in the 2014 Road Hockey to Conquer Cancer game in Calgary.