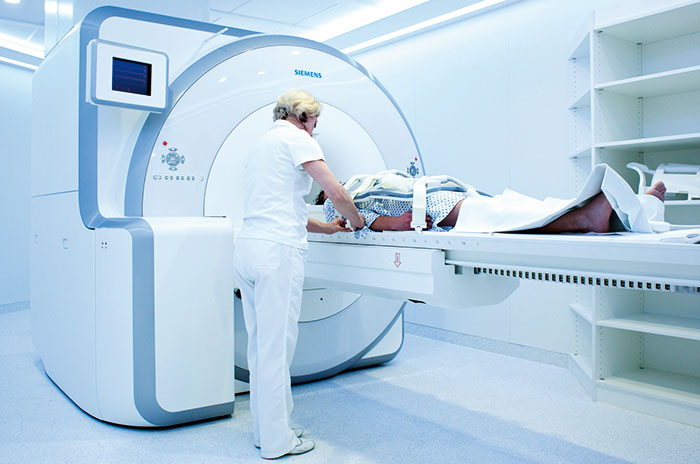 Anna Bertha Ludwig’s left hand changed the world. She had done little more than allow her husband, Wilhelm Röentgen, to photograph it using his 19th century doohickeys, but what developed on the film, a shadowy image of her bones, gave humans a rare window into themselves. Biologically, the first human X-ray merely suggested that she may have been a large woman (her wedding ring was over her second knuckle), but today evolutions of this technology allow humans to diagnose and manage complex diseases.

This year, the Cross Cancer Institute in Edmonton will demonstrate just how far the technology has come with the purchase of Western Canada’s first MMR, an imaging technology that combines magnetic resonance imaging (MRI) and positron emission tomography (PET) scanning. “It’s a generational leap,” explains Sandy McEwan, professor and chair of the University of Alberta’s oncology department, who also runs the Cross Cancer Institute’s PET Centre.

“We haven’t had much overlap but this is going to bring the MRI people into the oncology world where we haven’t been yet, and it’s going to pull the oncology people out of their comfort zone.”

Having been at the Cross for 27 years, McEwan is accustomed to using PET to research cancer and manage patients’ diseases, but MRI remains a utility of biomedical engineering, where neurological and cardiovascular diseases are the main study. That’s why his research group teamed up with another group across the street led by Christian Beaulieu, one of Canada’s preeminent fetal alcohol spectrum disorder researchers. Together they secured $17.5 million from the Canadian Foundation for Innovation, the Alberta Cancer Foundation and other contributors to fund a clinical research program using a Siemens Biograph mMR, the machine they expect to arrive late this year. And at about $10 million, it’s one heck of a machine.

An MRI (which depicts vivid greyscale pictures of the body) will show you the brain and all its wrinkles and details. A PET (which delivers psychedelic 3-D coloured images)
will show you how it’s working. Individually, both are critical but flawed. “You need to understand the biology, metabolism, biochemistry and physiology of the patient in the picture,” explains McEwan, “and that’s what we’re trying to do with the MMR – understand the biology of cancer, the metabolism of cancer, rather than the structure of cancer.”

Non-invasive imaging is indispensable to health care. It provides earlier and more accurate diagnoses, determines patients’ suitability to various treatments, analyzes how they respond and aids in drug and rehabilitation discovery. The new machine advances all these benefits. It is the difference between a single-lens point-and-click camera and a single-lens reflex (SLR) camera which can use multiple lenses. With a higher magnetic field, the MMR produces higher-resolution pictures and it produces them faster than ever before. In layman’s terms it’s “high-def,” says Beaulieu, scientific director of the Peter S. Allen MR Research Centre. “This is a pretty big evolution.”

“One of the real advantages of this equipment is that historically our groups have worked separately – the PET centre worked on PET imaging and cancer, the MRI centre on neurological, psychiatric and cardiovascular disease,” says Beaulieu. “We haven’t had much overlap, but this is going to bring the MRI people into the oncology world where we haven’t been yet, and it’s going to pull the oncology people out of their comfort zone.”

There are various links between cancer and neurology. Take leukemia, for instance. “One of the things treatment does is makes you feel very tired and feel very stupid,” says McEwan. “It’s called chemo brain and chemo fatigue. We don’t understand the biological mechanism with that, but we believe we’ll be able to find out with the MMR.” 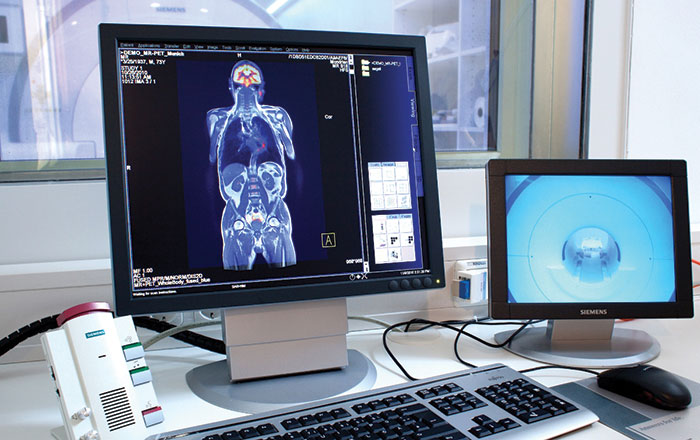 As well, taking sequential pictures of the body rather than simultaneous pictures is problematic. Subtle physiological changes can throw off a doctor’s understanding of a patient’s condition. “If I’m testing a patient with the MRI and then an hour later with the PET, I don’t know if we’re measuring the same thing,” says McEwan. “What’s the patient done in that time? Have they gone for a walk? Taken painkillers? Had fights? Answered an upsetting phone call? By doing it at the same time, we’ll have absolute confidence that what we’re seeing on the MRI and the PET scan are the same thing.”

When McEwan started practising in England “200 years ago,” he used a slide rule for calculations, an antiquated analogue computer that few people under 40 would recognize today. When it came to patient care, there was little more to offer but clinical examination. “It meant seeing the patient, touching them; you get a history, and prod and poke and listen,” he says. While clinical examination is still important, much has changed in oncology. And with each passing year and each technological upgrade, including the MMR, doctors are advancing one of the most important health-care models in human history – personalized medicine.

Personalized medicine is health care that customizes treatment, practices and decisions for each patient rather than offering the same to everyone with a particular illness. It looks to psychology, genetics, physiology, biology, family history and more to find the optimal treatment for each patient. As McEwan puts it, it’s giving “the right treatment to the right patient at the right time with the right dose in the right place.”

For example, two in three people with pancreatic cancer fail treatment the first time. “Wouldn’t it be nice if we could identify those two-thirds upfront, so we can give them the right treatment?” asks McEwan rhetorically. He thinks the MMR could allow that. “We’ll be able to identify those patients a lot earlier and a lot better because a) the resolution is better; and b) because we can look at other parameters.”

However, when the machine arrives late this year, when the bubble wrap is stripped off and it’s finally plugged in, it will be for clinical research only, meaning that for the first few years, only patients who sign a research study waiver will lie inside it. The 14 scientists from the Cross and the Peter S. Allen Centre will all find different reasons to use it, but McEwan in particular is interested in understanding cancer metabolism before and after treatment, studying the physical and psychiatric effects of treatment and radiotherapy treatment. All, of course, to advance personalized medicine.

But he’s the first to admit that, like all new technologies, he has no idea how to use it just yet. “There are about a dozen of these in use worldwide. We have to understand how to best use it first. Why put it toward routine diagnostics when it can do so much more?”

All in the Scott family