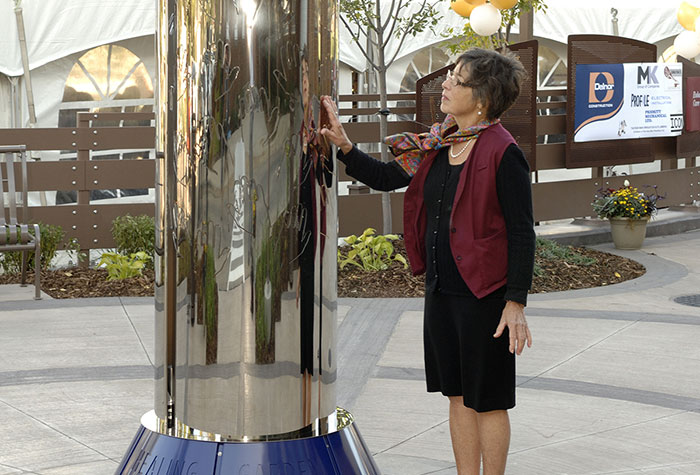 It’s been seven years since Susan Carr was diagnosed with pancreatic cancer, but she still recalls her visits to Edmonton’s Cross Cancer Institute for treatment as though it was yesterday. But despite the excellent care she credits her medical team with having given (she’s had a clean bill of health since), there was always something missing at the world-class treatment centre, she says.

Enter the Healing Garden, a nearly $700,000 initiative conceived by the Cross Cancer Institute Volunteer Association (CCIVA)’s 50th anniversary committee – which is chaired by Carr. The committee was given the task of creating a legacy for the volunteers, like Carr, who have collectively raised upwards of $4 million over the past 50 years for patient care and comfort.

The garden, which became a joint venture between the CCIVA, the Alberta Cancer Foundation, Delnor Construction and its trades and partners, and Alberta Health Services, officially opened September 19. Carr says she couldn’t be happier with how the outdoor space shaped up.

“Healing gardens; I think there’s been recognition fairly recently to the benefits that gardens can bring in terms of healing the spirit.”

“There were a couple of benches out on the west side, but other than that there wasn’t a place to sit,” explains Carr of her time at the Cross undergoing treatment in the spring of 2006. “Healing gardens; I think there’s been recognition fairly recently to the benefits that gardens can bring in terms of healing the spirit and providing comfort to just be outside in the greater outdoors and be able to soak up the sun and feel the breeze and enjoy plants and trees and flowers. I believe, certainly for me they had a beneficial effect. It’s not going to cure you, but it can be a great comfort.”

Carr says the idea of a garden was long part of the plans at the Cross, but it took the efforts of the CCIVA and some dedicated fundraising to get boots on the ground and shovels in the earth.

The partnership with the Alberta Cancer Foundation came about because the $300,000 originally set aside for the garden came up short after designs for the space had been inked. “Alberta Cancer Foundation approved matching funds of $200,000,” says Carr, adding Delnor Construction also reduced its price by more than $190,000. “It allowed us to complete the full design.”

That full design now includes two plaza areas and private seating, surrounded by shrubs, trees, perennials and grasses, with a pergola covering part of the lush outdoor space. The partnership was a first between the ACF and the association.

“We wanted something to honour the accomplishments of volunteers over the past 50 years. They really were a very resourceful, visionary and bold group of individuals that developed important programs and services over the years,” says Carr.

Jane Weller of the Alberta Cancer Foundation says while this is the first “official” time the Foundation and volunteers have teamed up, the volunteers’ impact can’t be stressed enough.

“They are such treasured and valued partners here at the Cross Cancer Institute each and every day, building relationships with patients and families and staff,” says Weller.