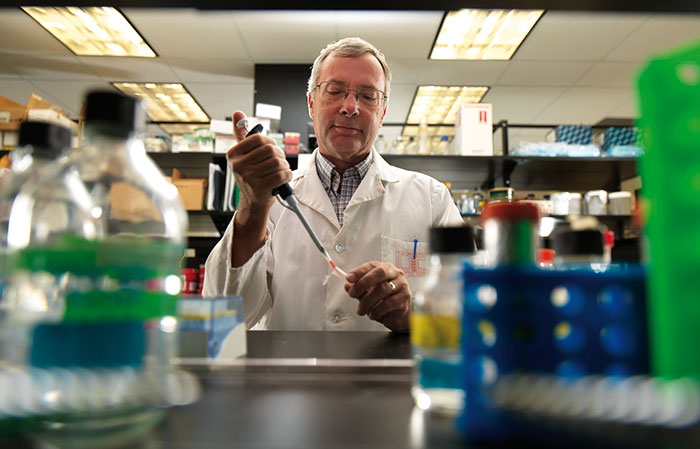 Albertans could hardly believe their eyes on June 20, 2013, as they witnessed rivers breach their banks and streets turn to waterways.

Record rainfall coupled with rapid melting of Rocky Mountain snow loads caused a flood that was called the worst disaster in the province’s history. The flood killed four people, displaced 100,000 people from homes, and caused damage estimated in excess of $5 billion on businesses, vehicles, and residences.

Among the irreplaceable assets poised for destruction was a $40-million collection of tumour samples used worldwide for cancer research, belonging to the Alberta Cancer Research Biorepository. Steps from the swelling Elbow River, the samples were secured below ground in 27 ultra-cold freezers at the Holy Cross Hospital.

As river waters steadily rose, and the clouds emptied onto Calgary’s low-lying communities, warnings for commuters to stay off bridges and avoid downtown were broadcast, and a small leadership group in charge of the biorepository debated whether they should protect it.

“We all saw the weather alert about a massive storm. Water was roaring down the mountain through Bragg Creek out into the plains, and moving towards Calgary,” says Dr. Randy Johnston, who is the director of the biorepository, and a researcher and teacher through the faculty of medicine at the University of Calgary.

“Just as the last freezer was coming up, the flood waters came rushing in where the freezers were stored, power went out, and elevators stopped working. All electrical stations shorted out.”

“We knew we only had a couple of hours before the water started to hit the city,” Johnston says, adding a smaller flood in 2005 had given hospital administrators a chance to put a disaster plan to the test, but the waters that year were nothing compared to what was coming.

“Everyone said ‘don’t worry’,” says Johnston, who was in Vancouver, B.C. at the time of the flood. He was trading hurried calls and emails with managers about whether to leave or take action. “We reached a decision that we couldn’t take a chance.”

“It was surreal,” says Charlene Karvonen, manager of the biorepository. The speed and sound of rushing water steps from the hospital was incomprehensible and frightening to her. “Everything we did was just trying to stay one step ahead. There was 13 feet of floodwater in 24 hours.”

The collection of samples was stored in 27 massive basement freezers, poised to be submerged in floodwater, sewage, and mud. But each unit weighed approximately 1,000 pounds and required temperatures of below -80°C – some even colder and operating on liquid nitrogen. Moving them would be risky, if not downright difficult.

The biorepository comes from 15 years of painstakingly detailed collecting and cataloguing of human blood, saliva, tissue and tumour samples, which researchers could access at any given time for dozens of worldwide studies. Today 47 different cancer studies draw from the biorepository, which is one of the largest of its kind in the world and growing. The Alberta Cancer Foundation has also been a long-time supporter of the facility, investing $2.8 million this year alone.

To lose the samples would have been “traumatic,” Johnston says. “Not only to society and the researchers who invested in the collection and clinical annotation, but all those people have entrusted us with their specimens,” he says, adding some samples originate from people who have since died. “It would be horrible it would have been a loss of trust,” he says. Meanwhile, it is impossible to assign a value to the potential discoveries that may come from continued study of the material, as past work on them has led to effective molecular therapies resulting in cancer survival, he says. “Already it is paying off.” The creation of an antibody therapy called Herceptin, for example, was developed by a U.S. firm based on the biospecimens from Calgary’s bank. Researchers learned about a particular mutation of breast cancer cell occurring in five to 10 per cent of cases. It features an excessive number of growth receptors that cause cells become overly sensitive to growth signals, and to rapidly divide and multiply.

“It’s bristling with antennae – even a tiny growth signal that would not trigger a healthy cell is stimulated to start dividing, dividing, dividing,” he says, adding the therapy was a breakthrough that involved a worldwide effort of shared research.

Other samples stored at the biorepository belong to the “Tomorrow Project” which is a venture that employs 60 members of a research team, and is about halfway through collecting samples from 50,000 healthy Albertans. The intent is if any of the participants come down with cancer later, researchers can go back to their sample history and potentially identify a sign in the urine or blood. If indicators are found to exist, they could become the basis for future screening and prevention programs.

By 4:30 p.m. on the day of the Alberta floods, Karvonen and her team called in a moving crew to begin lifting the freezers onto freight elevators to the fourth floor of the Holy Cross – a vacant space on higher ground, but gutted, dirty and under renovation. Temperatures in the freezers could remain at safe levels for a period of time provided freezer doors were kept locked, so the managers knew there was only a small window to make the move. Relocating them via truck through flooded streets was impossible.

“Just as the last freezer was coming up, the flood waters came rushing in where the freezers had been stored, power went out, and elevators stopped working. All electrical stations shorted out,” says Johnston.

The team sourced four diesel generators, and brought in emergency electricians who ran a power cable from the outside of the building through a window to maintain the temperatures.

When the waters receded, a massive cleanup was underway in Alberta backed by 2,200 Canadian Armed Forces troops, and within a few weeks, the Calgary Stampede went ahead as scheduled. A spontaneous volunteer campaign saw complete strangers show up for impromptu shifts to help shovel mud and restore damaged homes, and an uplifted can-do spirit prevailed.

Life in Calgary and communities downstream was returning to normal for many, with downtown offices reopening, and dark skies turned bright. “But our story wasn’t quite over,” Karvonen says.

Shifts of workers who were tasked to monitor the freezers on an hourly basis, which meant a buddy system of staff paired up to climb dark stairwells with flashlights and headlamps and navigate a disaster zone with dust masks and protective gear to ensure generator power was on. Over the months, crews hauled 120 carbon dioxide tanks up the four floors, changed filters, and attended to alarms and stalled generators.

“As a result of tremendous efforts we did not lose a single specimen,” Johnston says.

Karvonen also credits a dedicated team that was representative of Calgarians’ positive spirit even in a crisis. Four months after the flood, elevators were finally restored at the Holy Cross, and the freezers were finally moved October 2013 to safer territory in a clinic in south Calgary.

“People really rose to the occasion, and everyone had a role and did whatever they needed to do,” recalls Karvonen. “You would listen to the media about stories of people losing everything in their homes or businesses. There was hardship everywhere, but I saw people were not being defeated or deflated. We were strengthened by how we pulled together.”