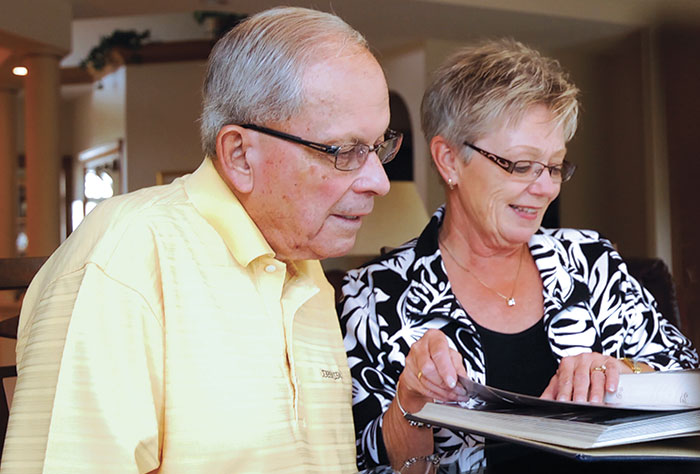 Good Match: Peter Fargey, with his wife Gwen, has been the face of the gift matching campaign since its inception.

If it’s not broken, don’t fix it. That’s the approach that ION Print Solutions took this year with its fourth-annual matching campaign to raise money for the Alberta Cancer Foundation.

Craig McEwan, managing partner at ION, says he has been impressed by the level of interest the Nisku-based company has seen in its efforts to raise money for cancer research through the Foundation. The campaign, which ran from mid-June to August 15, encouraged citizens and other companies to give money, and ION would match the funds raised, up to an additional $50,000 per year.

To date, the matching campaign has raised $1,220,927 in donor dollars, with an average around the $300,000 mark each time. With the matches from ION, that brings the grand total to date for the summer campaigns to $1.43 million.

The campaign was inspired when founding partner Peter Fargey was diagnosed with stomach cancer back in 2010, which resulted in the removal of his duodenum and a full year of chemotherapy. He’s since been given a clean bill of health, but he remains the public face of the campaign, says a delighted McEwan of his business partner. “He’s 100 per cent. He’s cancer-free, which is awesome. He retired last May and he’s really loving his grandkids. He’s loving every day.”

McEwan has found that the gifts through the campaign keep getting better. “It’s been such a positive thing. We were quite excited that the numbers had actually increased from last year, which is just dynamite,” he says of this year’s $301,437 in donor funds.

“I am hoping to really bring it to a new level next year in terms of having a few more events and such so I think that will help it to keep some legs.”

The campaign has been tied to the company’s environmental stewardship, because cancer is sometimes linked to environmental pollutants, he says, noting the company has kept its commitment to better practices since it went “green” back in 2010.“It keeps reminding folks of the importance of the environment and our position as a company on that.”

Sean Capri at the Alberta Cancer Foundation says one trend he’s seen in the matching campaign is the same people donating year after year. “Looking back over the past four years, it gives me chills to think about the donors who have connected so strongly with Peter Fargey, his family and story, and the Ion Print Solutions Matching Gift Campaign,” says Capri. “Their commitment to supporting cancer research, prevention and screening, and enhancing patient care right here in Alberta is truly humbling and inspiring.”

Peter Fargey didn’t initially realize his persistent stomach ache, for which he was popping Tylenol to no avail, was anything serious. When he finally went to the doctor and then had a gastroscopy – a test that involved threading a tiny camera down his throat to see inside – the doctors found a rare duodenal cancer. That was 2009.

After several surgeries and nearly a year into Fargey’s chemotherapy, his business partner Craig McEwan came up with a way to give back for the excellent care he’d received at the Cross Cancer Institute, through a gift-matching campaign to the Alberta Cancer Foundation, proceeds of which go to cancer research in Alberta.

Now in its fourth year, Fargey remains the public face of the successful campaign. His wife, Gwen, says she is thrilled to have her husband’s story behind the initiative.
“It’s very gratifying to have Peter’s name associated with the campaign.”