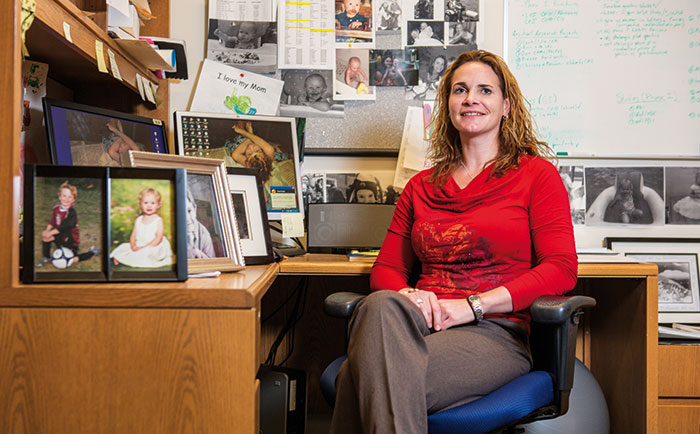 Gastrointestinal cancer is a complex and often deeply frustrating field. But Dr. Jennifer Spratlin has never regretted making it her medical specialty. As an assistant professor at the U of A and a medical oncologist at the Cross Cancer Institute, she knows she’s making a difference, both for her own patients and for patients in the future.

Like every oncologist, Spratlin wishes she could send every patient home with a clean bill of health. When a tumour turns out to be operable, and followup treatment successfully stops the cancer in its tracks, that situation falls into what she calls the “good spectrum” of her job. “When you’re treating somebody to cure them, it’s always a good day when you get to see them after they’ve completed their chemotherapy [and say] ‘Congratulations, you’re done! You made it through. Hopefully I never see you again, unless it’s in the supermarket.’ ”

Of course, the road is not always that easy, for either Spratlin or her patients. For example, pancreas cancer ranks among the deadliest forms of the disease, with a five-year survival rate of about five per cent. Although it’s only the 10th most common cancer in Canada, it’s the fourth leading cause of cancer death.

Often, when Spratlin meets a patient for the first time, she knows that the relationship will end with their death. Despite the difficult emotions involved, she has learned to cherish these experiences. “It’s a privilege,” she says, “to help people as best as we possibly can through the difficulties of end-of-life care.”

“The early drug development clinical studies that I’m part of are the stepping stones toward having better treatment for cancer care.”

In addition to treating patients using established procedures, Spratlin devotes much of her energy towards clinical trials. “Part of my job as a medical oncologist is to try to make sure we’re advancing the care of our future patients,” she explains. “The goal is to get better treatment for the patients we’re seeing next year. The early drug development clinical studies that I’m part of are the beginning stepping stones toward having better treatment for cancer care.”

Spratlin’s current research includes two projects funded in part by the Alberta Cancer Foundation – both aimed at improving outcomes for pancreas cancer patients. The first involves pancreas patients who have a good chance at being cured – patients who have made it through surgery to remove tumours, and who are now moving on to chemotherapy.

Currently, most of these patients are treated using a drug called gemcitabine, which for many years has been the only available chemotherapy for pancreas cancer. However, previous research at the University of Alberta and the Cross Cancer Institute has shown that gemcitabine only works when a patient’s cancer cells contain certain proteins – in particular, one called “human equilibrative nucleoside transporter 1,” or “hent 1” for short. In the absence of that protein, cancer cells don’t absorb the drug – meaning that the patient ends up with all of the side-effects but none of the benefits.

“So, we actually test the patient’s cancer for that protein,” Spratlin explains. “If their protein is high, we would choose one chemotherapy [gemcitabine]. If the protein on their tumour is low, we choose a different chemotherapy. The hope is that we’ll have a better chance of cure down the road. That’s pretty cool, because you’re actually personalizing the treatment to the cancer that patient has.”

Spratlin’s second Alberta Cancer Foundation-funded research study looks at patients with advanced pancreas cancer. Again, they’re testing the tumours and trying new drug combinations for those patients whose tumours don’t contain the “hent 1” protein. “If we can test the tumour itself, and figure out the biology of the tumour, maybe we can choose a better treatment for that patient, to give them the potential to live longer than they would otherwise,” Spratlin says. 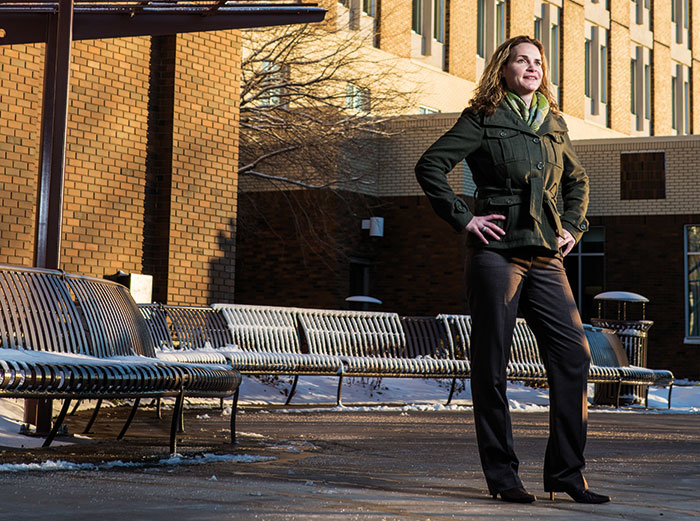 As with the first study, the goal is to craft treatment strategies to better fit the patient, rather than simply relying on standard chemotherapy. “We’re trying to see if we can better personalize the treatment that a patient gets to improve how long they will live and make them feel as good as they can – for whatever length of time that is.” Even when her patients’ cancers aren’t curable, Spratlin wants to provide them with the best quality of life she possibly can. “We’re trying to extend people’s lives with our chemotherapies and our new treatments, but at the same time, if we’re not giving them a quality of life that they can actually enjoy during the time they have left, then we’re definitely doing the wrong thing.”

In addition to her pancreas cancer research, Spratlin is in the midst of an ongoing project (also partly funded by the Alberta Cancer Foundation and Sanofi Canada) to monitor and improve followup care for colorectal cancer patients.

Typically, once colorectal cancer patients have undergone successful surgery and treatment, they are expected to closely monitor their health to be sure that their cancer doesn’t return. “They get blood tests every three months for three years, a CT scan at one and two years from their surgery, and ongoing colonoscopies,” explains Spratlin.

Back when she was a resident, Spratlin worked on a study that discovered only about seven per cent of patients were following through with the blood tests after being discharged into the community. In response, the Cross began to keep those patients in the system. “We developed a nurse-run virtual clinic, where everybody who’s had stage two or three colorectal cancer, after their treatment, will go into this program,” she says. We automatically send them requisitions to go get their blood work. A nurse checks in every three month – and if they haven’t had it, then they’re called.”

The extra level of vigilance sparked a drastic improvement. “When we reanalyzed our data, the adherence to our guidelines for followup went from about seven per cent to over 50 per cent,” says Spratlin. That early success has made the team hungry for more. “We didn’t think that was good enough. We’d like to see it closer to 90 per cent.”

Over the next two to three years, Spratlin and her colleagues will continue to revamp the program and measure the results. They have introduced an education session for the patients, to emphasize the importance of followup care and to encourage patients to eat properly and exercise. The goal is not to pester patients, says Spratlin, but rather to give them the information and motivation they need. “We want to empower patients to take control over their own health,” she says.

Despite the challenges she faces every day, however, Spratlin loves her job. “The Cross Cancer Institute is a wonderful place to work,” she says. “The people who work here are all pretty special – everyone from our administration assistants, to the pharmacists and research staff and nurses, to the doctors and volunteers. It’s a little like the show Cheers – everybody knows your name. I think that goes a long way for our patients.”

Having two young children waiting for her at home also helps Spratlin maintain balance and perspective. “My job is sometimes difficult, but one of the nice things about it is that it really does highlight your mortality,” she says. “So, it’s pretty easy to go home and have fun – because you don’t really know what’s going to happen tomorrow.”

Best of all, Spratlin never has to look in the mirror and wonder if she chose the right career path. “Despite the obvious sad parts to my job, I have the ability to treat my patients to the best of my ability, and pursue my research interests in hopes of trying to find better treatment options for present and future cancer patients.”

Q and A with Dr. Jennifer Spratlin

Q: Rumour has it you can breakdance and do the move “the worm.”
A: Breakdance, not so much, but I can do the worm. My worm only goes backwards; I can’t figure out how to go forward despite a lot of practice! I can’t recall when I learned how to do it but it sure is a great party trick!

Q: What do you do for relaxation when you’re not at the Cross?
A: Relaxation, relaxation … hmm. I like to play with my kids, which helps me relax. I also usually try to get a work out in every day. Other than that I like hanging out in my yard and cuddling up by a fire and watching a movie (mostly cartoons these days) is fun.

Q: How do you talk to your kids about cancer?
A: My kids know I am a cancer doctor, that I help cancer patients and give them special medicine to try to make them feel better. I don’t know if they totally get the concept of what exactly cancer is other than a bad illness that can make people sick and sometimes so sick they can die. Though I am not a lung cancer doctor they also know that if they ever smoke, mommy will kill them before their lung cancer does (kidding, of course … sort of!!)

Q: What’s the last good book you read, or are you reading something interesting now?
A: Howie Mandel’s biography, Don’t Touch Me — probably a better answer that the 50 Shades of Grey books!

Q: Where do you like to travel to?
A: Anywhere warm with a pool and a beach.

Top 10 Things to Know About Cancer in Young People