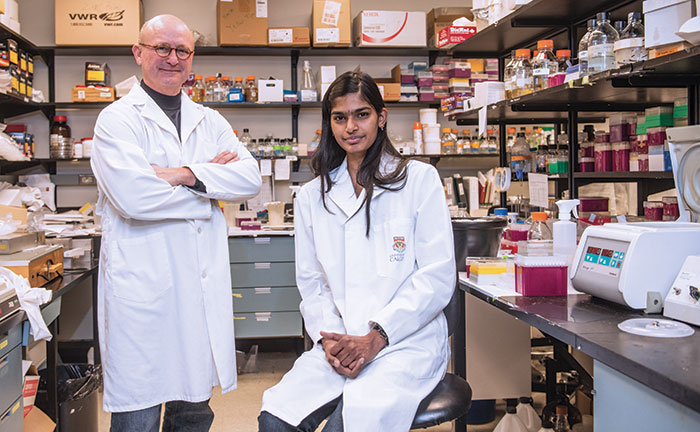 Uma Rajarajacholan may only be 27, but she’s a quick study in the field of aging.

The University of Calgary PhD student, who is working under Dr. Karl Riabowol in biochemistry and molecular biology and oncology in the faculty of medicine, has spent the last four years studying cellular senescence – essentially how and why a cell seems to grow old.

With an undergraduate degree in chemistry and a master’s in biotechnology earned in her native India, the move to study cancer in Canada was a bit of a leap for her, but welcome, she says.

“Everything was so different from what I grew up with so I wanted to see that. So far things have been going on well,” Rajarajacholan says.

She is proving herself to be quite an up-and-comer, having received the Alberta Cancer Foundation’s Dr. Cyril M. Kay Graduate Studentship Award, and also seeing her research recently published in PLOS Biology and Nature Reviews Cancer. The award includes the research allowance of $1500, established in honour of Dr. Cyril M. Kay’s research career, for training and development of the next generation of researchers.

“That’s a clear indication of how important it is to the area,” Riabowol says. “You just can’t submit your stuff there; people say it should go there. So we were totally happy with that.”

Riabowol’s lab has long investigated cancer and aging. He says they look at cancer as a cell that’s avoided the aging cycle and become immortal, “A cell that’s become immortalized can therefore divide and divide and divide, more or less unendingly,” he explains. His team is looking at biological aging and how it is subverted in cancer, to better understand cancer and aging, “so we can somehow alleviate the effects of aging and expand cellular lifespan. It’s a bit of a lofty goal, but it’s doable,” he says.

Years ago Riabowol and his team found a tumour suppressor, which they called ING1 for Inhibitor of Growth. Rajarajacholan took the study even farther, her mentor says. “Uma found that one of the ING isoforms – we call it ING1a – it induces a premature senescent state if you make a lot of it. The more interesting part is that as our cells normally age, the levels of this ING1a naturally go up. So we were trying to figure out if this was a chicken or an egg phenomenon.”

“The phenomenon could be a clue as to how, as cells get older, they start to lose the ability to divide. We know that if we block the effects of this gene, the cells can divide a little bit longer,” Riabowol says. “So it’s not quite yet the fountain of youth, but it’s a little spring of youth, I suppose.”

Rajarajacholan, who will soon defend her PhD thesis and leave the Riabowol lab, takes her accomplishments in stride. What’s more, she encourages other young people interested in science not to be discouraged to try – and sometimes fail. “If you don’t give up in the early phases when it is actually tough, every day there is something new to learn,”she says. “As long as we keep that attitude, things can work – and it’s better than having a pessimistic approach.”

Rajarajacholan says she feels most at home in the lab. “I enjoy doing bench work much more than actually sitting in a class. It’s more of a practical knowledge when you do research in the lab. Definitely there is a lot of background material. You need to read and understand the basic principles of stuff. So you need a basic understanding of what you’re doing, which you can only learn by reading papers or textbooks.”

She’s added as much to his team as he’s helped her, Riabowol is quick to say. “She’s got a tremendously good work ethic. She’s not afraid of work. She also has an ability to synthesize stuff from the literature that’s quite amazing. She’s tremendously ‘scientifically mature’ for her stage of development and all those factors have played in nicely to contribute to her success.”

Feet on the Ground

Deep Roots in the Community