Cal Nichols, the man who saved the Edmonton Oilers, is not someone who dreams small dreams. Yet even the boy from small-town Saskatchewan, turned highly successful Alberta businessman, never imagined such a significant future for the Cross Cancer Institute Golf Classic when he volunteered to chair its first tournament in 1989. “Twenty-five years ago, there weren’t many golf fundraisers in Canada, let alone Alberta,” explains the chairman of Gasland Properties Ltd. “Back then, no one thought a tournament could raise a million dollars; the idea was laughable. We set our first target at $50,000 and thought we did great when we raised $60,000.” But last year, the Classic surpassed the million-dollar mark for the first time in its history, raising $1.1 million.

By 2013, as the Cross Classic headed into its 25th anniversary, that initial $60,000 had grown into more than $9 million raised to pioneer cancer research, treatment and patient care. Keeping that trajectory high, the 2013 organizing committee set its sights on breaking the 2012 revenue record, which would put the new total above $10 million. And they did, bringing the grand total to nearly $10.3 million. Not a bad return from an August day of whacking a small white dimpled ball around the Edmonton course, along with proceeds from the current 10 Classic companion tournaments hosted every summer throughout Alberta.

“So when Glenn chose the Cross as the new charity for his golf tournament, Doug and I just naturally pitched in to help,” Nichols says. “It just kind of happened without any big plan.”

He recalls the Classic’s early days as a huge learning and growing process. For the first three years, until Alberta Cancer Foundation staff became directly involved, all organization and logistics for the tournament were arranged from his downtown office. “It took more time than we expected at first,” Nichols remembers ruefully. “I was heavily involved in its infancy, then later took a lesser role as others joined in.” He praises the good work many chairs after him did to increase the tournament’s stature and raise its revenue.

Although an element of serendipity brought Nichols to the Cross Classic (it was really Glenn who picked the Cross, he notes), that’s not what’s made him a supporter for more than two decades and counting. First and foremost, it is the cause. “Show me a family that hasn’t been touched by cancer,” he says. ”We’re all emotionally involved and the Cross is doing outstanding work toward a cancer-free future.”

He also prizes the connections gained and people met during fundraising activities, including the Classic event. “So many companies and individuals come back year after year that you look forward to the gathering of familiar faces. It’s like an annual reunion.” Last but not least are priceless moments, like the joy he saw on patients’ faces when they touched the Stanley Cup that he and Anderson carried to every floor of the Cross Cancer Institute. “It’s almost an annual compulsion now to be part of the Classic, to pitch in and help out,” Nichols says. “I’ll stay involved as long as they’ll
have me.”

Bob Bentley, dealer principal of Freedom Ford and another long-time Alberta Cancer Foundation and Cross Classic supporter, has a very direct and personal connection with the Cross Cancer Institute. “I became aware what a very special place it is during my wife’s cancer treatment,” he says. “After her passing in 1994, I wanted to do something with the Cross.” Posters at the hospital about a golf tournament had piqued his interest earlier, so he made a few phone calls. Quicker than it takes to play 18 holes, he found himself invited onto the Classic’s organizing committee, then served as chair from 2000 to 2005.

“I’m a terrible golfer!” Bentley claims. “But it’s not really about golfing, is it?” In addition to the camaraderie at the actual event, Bentley notes that many a strong friendship is forged as committee members share their business and social networks for a common goal – they made the Classic bigger and better than ever. “Many business people are involved, so inevitably we get competitive about beating past years’ totals. It keeps the energy high.”
What really gets Bentley fired up, though, is hearing how funds raised at the Classic will make a difference. “It’s a different mission every year, always something that donors can relate to, explained in terms a layperson can understand,” he says.

The Classic helped bring a number of firsts to the Cross that he’s proud of: the world’s first TomoTherapy machine, which lets doctors treat cancer more effect-ively with precisely targeted radiation and fewer side effects; a state-of-the-art electron microscope that shows such minute particles in cells that researchers can understand genetic changes and better target treatment; the Linac-MR machine, currently in research and development stage, a revolutionary machine that will allow doctors to see and treat tumours with radiation in real time while minimizing the amount of healthy tissue affected; and a PET/CT scanner, which is the first of its type in Canada.

“I’m not a technical guy,” Bentley says. “But when you hear the doctors talk about what the new equipment, like the PET/CT scanner, will do or the research being done by new recruit Dr. John Lewis as the Alberta Cancer Foundation’s Frank & Carla Sojonky Chair for Prostate Cancer Research – where this year’s tournament funds are directed – you realize the golf tournament supports a world-class centre of excellent research and cancer treatment.”

Finally, what really drove the importance of the Classic home for Bentley was learning that the revenue raised by the tournament is often matched by grants from the province and/or federal government. “I’ve seen how seed money can be leveraged and watched $2 million turn into $10 million. It’s amazing to think that thanks to the Classic’s dedicated supporters, sponsors and volunteers, we can parlay a day’s golf into that kind of money for cancer treatment and research.”

Fore a Good Cause

Cal Nichols and Bob Bentley continue to support the Cross Cancer Institute Golf Classic, but as Bentley says, “We now let others do the heavy lifting.” Or, as Nichols explains: “An event like the Classic needs new blood to continue to grow.” Here’s how three of the current “heavy lifters” explain their involvement.

Harry Kipnes, Digital Communications Group president says, “We’ve been a sponsor since the Classic’s inception and I’ve been involved since the early 1990s, first in my corporate role, then later individually, including serving as chair. The Classic is an all-round feel-good story: It’s a first-class event where you work with very special, committed people and see great outcomes for a great cause. There’s a lot of joy at this tournament and it’s how I feel impactful, especially when you can see how the dollars are used for leading-edge research and equipment.”

John Kopeck, The Edmonton Journal’s director, sales and advertising (and Golf Classic chair) says, “The Journal’s involvement goes back many years, and I’ve been personally involved for six years, the past two as chair. I donate not because of the golf, but because it’s how I can make a difference. Raising funds for Dr. John Lewis and his team’s research in prostate cancer also hits home for me, since I know people who have been personally affected.”

Darrell Graham, Rogers Communications Inc. vice-president of distribution sales for Western Canada says, “Rogers has been a sponsor since the Classic began and I participated on our corporate team for about 10 years. But I wanted to do more than golf, so I’ve been on the organizing committee for three years. The Classic sets tangible and meaningful goals and I’m proud to support the work the Cross does. As a parent, volunteering for the Cross Golf Classic is one more way to be involved with finding a cure.” 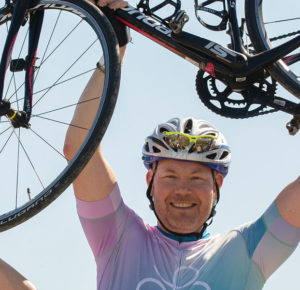 The Give’r Project invites Albertans to give where they live