Pattie Ghent is never short of company when she steps into her Calgary home. Her humble abode was already housing two elderly dogs, one retired guide dog and one puppy, but recently a couple of cats were added to the mix. Ghent’s daughter was evacuated from her downtown Calgary apartment, the hardest hit area of the city’s late-June floods, and Ghent became the proud, temporary owner of the displaced felines. 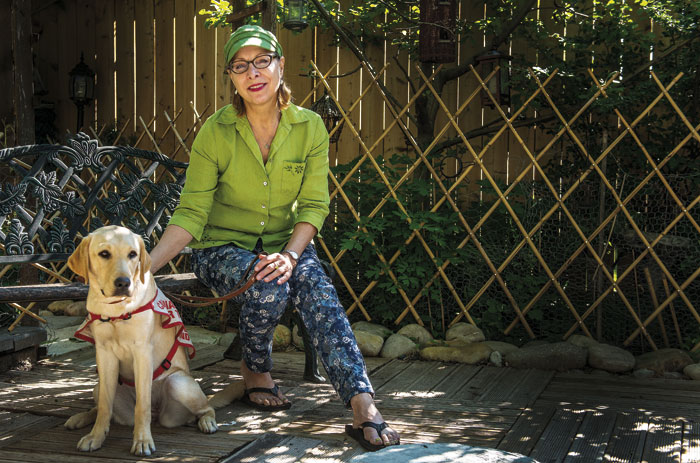 Her home was much quieter back in 2005, the year Ghent was diagnosed with endometrial cancer. Her daughter was away at university and her son rebuilding his own life after a serious car accident. Ghent was also in the midst of a lengthy divorce.

As a former psychologist and teacher, she faced cancer alone, but the experience gave her the tools and empathy to help others who have been dealt a similar fate.

Ghent’s cancer treatment included multiple abdominal surgeries and long, painful recovery periods. “Somebody goes in there and they haul your abdomen out, have a look at it, throw it through the wringer/washer, take some parts out, shove it back in and nothing’s ever the same,” she says.

Through all of her treatments, it was the indescribable fatigue that kept her homebound more than anything else. She, like many others cancer patients, found that first, exhausting step out her front door to be extremely hard after her weekly routine was no longer filled with hospital visits. She was on the road to recovery, but now what? There wasn’t anyone to tell her what to do.

Wellspring Calgary, a networking facility for cancer patients, is a place Ghent eventually turned to for support during her recovery. Along the way she learned a lot about the strength and influence patients can have on their own treatment and recovery. 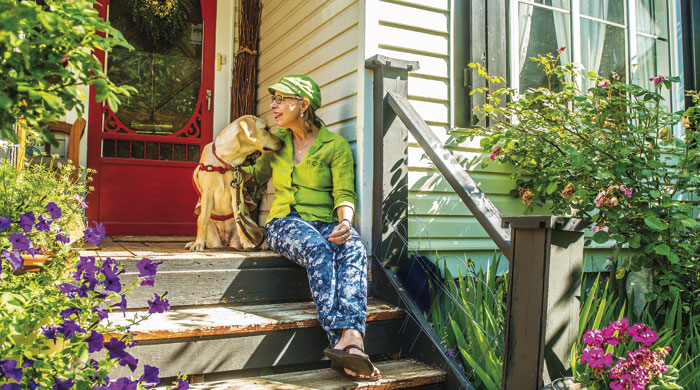 “The idea [of Wellspring] is to have a place to go and to start something just for you,” she says, adding that it’s about engaging and rebuilding a new and different life. She stresses that Wellspring is not about the medical side of cancer; rather, it’s about everything else. It offers yoga, speaker sessions and sometimes just coffee to give patients a reason to get out of the house. Also, Wellspring’s vision statement – “No one has to face cancer alone” – fits nicely into the life Ghent has remodelled for herself.

That life for Ghent now means raising yellow Labrador puppies – future guide dogs – for their first few years before sending them back East for final guide-dog training and assignments. After her surgeries, she had a hunch that raising puppies would be the push she needed to get out of her state of extreme emotional and physical fatigue.

“It happened within 24 hours of getting the first pup,” she says. “It was like taking all the classes at Wellspring at once and in the first couple of days I was thinking, ‘Oh my goodness, I’m walking; I’m chasing after this puppy; this is like yoga!’ So much mental alertness had to happen, too.” She says it was much like the response to Calgary’s flood: there was a sense of emergency where every part of her was ramped up and things just had to get done.

Ghent volunteers her time now at Wellspring by bringing her puppy-in-training in a half-day a week, and the members love it. She had to leave behind her psychology practice after cancer treatment began roughly seven years ago, but she hasn’t left behind all of her skills. Aware and realistic that the “brain fog” and loss of memory skills most cancer patients face has changed her academic ability, Ghent still likes to test her mental abilities and challenge herself with various projects.

When Dr. Nancy Marlett, director of community rehabilitation and disability studies at the University of Calgary, requested Wellspring members be participants for her team’s next patient engagement research (PER) project, Ghent was quick to volunteer. She was curious what patient engagement meant in health care and hoped it would be an extension of the advocacy she had already been doing for friends and family, using her psychology background to help them navigate the mental health system.

Having knowledge from both sides of the examination table, Ghent helped people speed up their search for the right resources, be on the right wait lists and get answers to more than just one question per visit with their doctors. The priority of the PER project was to have patients more involved in their own care by engaging health-care professionals with relevant questions and doing some personal research. Ghent was right on board with this.

One Wellspring PER participant had Crohn’s disease as well as cancer. Based on her tireless personal research, she questioned doctors’ treatment recommendations before accepting them and even questioned if the surgeon assigned to her procedures was the right doctor for the job. She explained to Ghent that it was her diagnosis, surgery and life to live, not the doctors’, so why wouldn’t she find out everything she could?

“You hear somebody in the next examination room and you think, ‘Oh, my time is up. I better go,’ ” Ghent says. “Patient engagement is trying to undo some of that thinking.” It’s a natural reaction to a doctor who appears to be an authority figure, not a partner in your treatment.

The point is, Ghent says, there’s nothing else that makes you think about your mortality as much as a cancer diagnosis does. This isn’t time to sit and do nothing. Treatment has to start immediately, but patients should also want it to be the right treatment with results they can live with afterwards. But, the system is still evolving and not every medical professional is going to spell things out for you if you don’t prod a little.

Family members can also act as a helpful health-care advocate for a loved one diagnosed with cancer. Mavis Clark, a former school superintendent, and her husband Paul, a former vice-president at Canadian Pacific Railway, looked into treatment options after Paul’s lung cancer diagnosis in 2007. They even ventured into the U.S. to confirm their Calgary care was the best they could get, and it was.

“Initially when somebody is diagnosed, your whole focus is on the best outcome for that person,” Clark says, adding that Paul was also very interested because of the type of person he was. “His oncologist, Dr. Don Morris, is a leading clinician researcher and was the perfect fit. We were able to engage him in a very direct and meaningful conversation about what research looked like and where things were going in cutting-edge research.”

Morris is a medical oncologist and the current director/research scientist at the Tom Baker Cancer Centre’s Translational Laboratories. His approach to research is to get scientific findings into the “clinical arena” as soon as possible, but he advises patients and families that new findings can take up to a decade before reaching late-stage clinical trials to impact cancer patients’ lives. 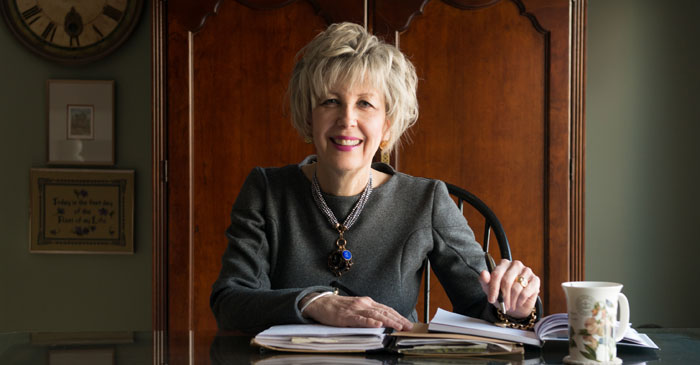 Lung cancer is still thought to be a smoker’s disease, yet Paul did not smoke and he still died in 2010 from the disease. Since her husband’s death, Clark became an advocate for other lung cancer patients and families through committees like the Alberta Cancer Foundation’s research advisory committee and the Tom Baker Cancer Centre Translational Lung Cancer Research Initiative. She wants to change the perception of lung cancer being a smoker’s disease but also get patients and families more involved with the push for more research. Clark saw that other cancers had walks, runs and even months (like when November becomes Movember in the name of prostate cancer) dedicated to them, while lung cancer didn’t receive the same attention. She wanted people to understand how common and serious the disease is: in Canada, lung cancer causes more deaths than breast, colorectal and prostate cancer combined.

“With the absence of research dollars, progress is much slower,” Clark says. “It’s not a single endeavour; it’s a partnership of patients working with clinicians and that comes from being informed and knowledgeable about the disease.” She says Morris told her and Paul about research, right in their community, that they could support to help lung cancer research specifically. They wouldn’t have known about it otherwise.

“If you don’t have a rapport with your patient and vice versa, it becomes a therapeutic disadvantage,” Morris says. “If people feel like they are being heard, then the dynamic of second guessing and wondering if you are getting the best care is gone, and the ability to bring new ideas to the table – all of that is fostered.”

It’s a good thing, Morris says, that the bar has been raised for health-care workers today compared to 20 years ago: a time when patients were very quiet in the examination room and accepted whatever diagnosis or treatment plans were prescribed.

“If we look back at what patients did for AIDS, that is really what we would want to have happen with cancer,” Clark says. “It was driven by patients stepping up and working with clinicians and researchers to change the face of AIDS and that’s happening in some cancers and I’m hoping will happen with lung cancer.”

Not to be Intimidated

Patients can be advocates for their medical care and not be confrontational with their health-care providers. When in the examination room for a regular checkup or following up with a cancer diagnosis, here are a few things you can do to avoid intimidation or losing your cool.

How can I reduce my risk of developing cancer?