When you think of archery, you probably think of legends like Robin Hood or Wilhelm Tell. But these days, you don’t have to be able to split an arrow or peg an apple to participate in the sport. Archery is one of the fastest growing activities in Alberta and it’s perfect for all skill levels, ages and seasons. Plus, it’s a great way to stay active in the fall and it’s easy to get started. 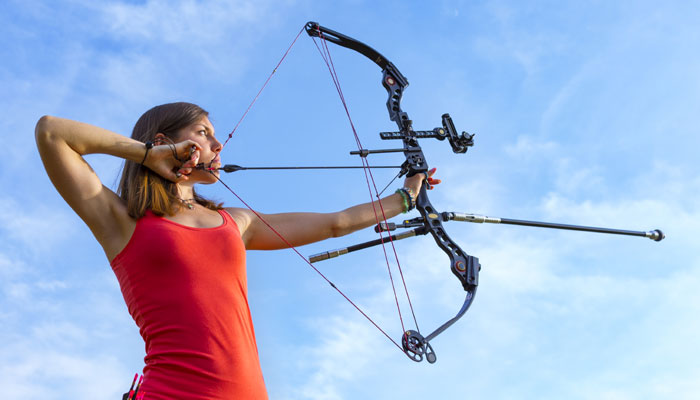 Shoot for something: how about archery

“Archery is a sport anyone can participate in,” says Fred Matthews, a coach and the secretary/treasurer at the Capital Region Archery Club (CRAC) in Edmonton. At CRAC, they have members as young as six and as old as 60, all with varying skill levels and interests. “It’s a sport that anybody can take up – young or old – with literally any intention, whether it be just as a hobby or with Olympic dreams or anything in-between,” adds fellow CRAC coach and vice-president Erick Lavigne.

There are two basic forms of archery. The first is bowhunting, in which the archer is usually mastering the sport for the purpose of hunting. The second is target archery, where the archer is aiming at a target. While much archery activity in Alberta has been bowhunting in the past, target archery is starting to gain in popularity. While the sport was reintroduced to the modern Olympics in 1972, at the 2012 London Olympics, the event was sold out every day and TV ratings hit record levels.

“It’s a sport that anybody can take up – young or old – with literally any intention, whether it be just as a hobby or with Olympic dreams or anything in-between.”

Matthews and Lavigne credit pop culture for the growing popularity of target archery. The recent appearances of characters like Katniss Everdeen from The Hunger Games and Hawkeye from The Avengers on Hollywood screens have piqued the interest of many young people. At CRAC, membership has nearly doubled in the course of a year, from 125 members in the summer of 2012 to almost 250 in 2013. The club recently moved into a new indoor shooting facility, but now they’re in need of even more space than the new facility can provide.

The archers that come through club’s doors vary. Children and adults all participate using both recurve bows (traditional bows most often used for target archery), compound bows and hunting compounds. At CRAC they also have members who practice Kyudo, a Japanese form of moving meditation in which a bow is used for mental skills training.

The best way to give archery a try is simply to go to your local club. Even if you’re not sure which type of archery you’re interested in, the clubs will have lots of bows you can try out and coaches to give advice. “The majority of the time most of the people in these clubs have no problem giving advice, answering questions,” says Lavigne. “There are great clubs all over Alberta.” Plus, many clubs offer drop-in classes for those that just want to give archery a try or even weekly lessons.

Beyond trying archery as a fun activity, there are also health benefits. “You do use a lot of muscles that you don’t generally use in everyday life. It’s healthy and fun,” says Lavigne.

And because it’s a sport that requires concentration and precision, it’s also a good mental exercise.

“Certainly much of an archer’s success, whether it’s as a bowhunter or an Olympic archer, that success depends upon their mental focus,” Matthews says. “Archery not only strengthens the body, but the mind as well.”

It’s also a great social activity, especially in Alberta, which has a growing archery community. “It’s individual, but at the same you’ve also got a community feeling with it,” says Mike Screen, the secretary/treasurer for the Central Alberta Archers Association (CAAA) in Red Deer.

Not only does it bring small Alberta communities together, Alberta also draws in people from other provinces. For example, the CAAA partners with the Bighorn Bowhunters & Archers Club from Airdrie to host the yearly “Mother of All Shoots” in March. Last year, the event drew 600 contestants from B.C., Alberta, Saskatchewan and Manitoba. “It’s a family event and just a fun weekend of archery,” Screen says.

Screen says each year they get families participating together, often entrants from multiple generations. He thinks it’s a great way for those of all ages to be active and have fun. “They’ve got a range, from a peewee up to a senior all shooting together,” he says. “It’s really something for all ages, and for the entire family to get involved in. And that’s what we love to see.”

Membership rates vary widely by club and age group, but drop-in rates are usually around $10 per visit, with membership ranging from $30 – $250 for a year. Clubs that have indoor facilities and operate year-round typically charge more for memberships, but allow archers to practise the sport throughout the year.

There are plenty of places where you can jump into the sport of archery. Many towns across the province have archery clubs, which often offer
drop-in classes or equipment that you can try out. Some of these clubs may focus on target archery, while others may be centred on bow hunting, but there’s definitely a community near you that offers archery.

Here’s a listing of just some of the archery clubs in Alberta communities.