The challenge was between my husband Kevin Lindstrom’s employer, Solutions Workplace Furnishings, an Edmonton-based office furniture dealer, and HBI, a sister company in Calgary. Kevin’s office decided to enter a team of six – the Solutionators – into the 2013 Mud Hero event, which took place on on August 10 and 11. 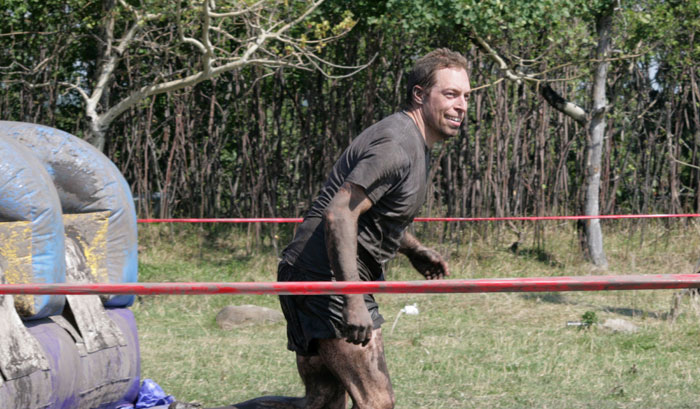 It was the second annual Mud Hero in Alberta with the Alberta Cancer Foundation and neither my husband nor his teammates had ever participated in anything like it before. They didn’t really know what they were in for or how to properly prepare for a muddy six-kilometre-long obstacle course on a ski hill (Canyon Ski Resort just outside of Red Deer). It took them through tunnels, traversing hills, under logs, forcing them into deep, sludgy mud puddles and over walls via netted ladders.

Kevin and his five teammates were slotted for a 2 p.m. start on Sunday, August 11 while family members, friends and strangers cheered them on – partially because nobody could tell who was who considering all participants looked the same: brown, dirty, smiling messes. Red Deer’s event spanned two days due to its popularity – and it still sold out! Other locations host the dirty event too: Ottawa, Montreal, Halifax, Winnipeg and Toronto, with local charitable organizations benefiting. For Red Deer, the Alberta Cancer Foundation received $35,000 in donations from the Super Mud Heroes – online fundraisers. Participants were also given the option to fundraise for the foundation.

With our two young daughters, Kevin is no stranger to mud puddles and he has already set his mind on next year’s Mud Hero while also gently twisting arms of co-workers to take part.