Not everyone can say the work they’re doing could one day affect the lives of millions, even billions, of people. But Bryce Hirsch is an exception, and that potential to impact future generations is what drives his dedication to the Tomorrow Project. 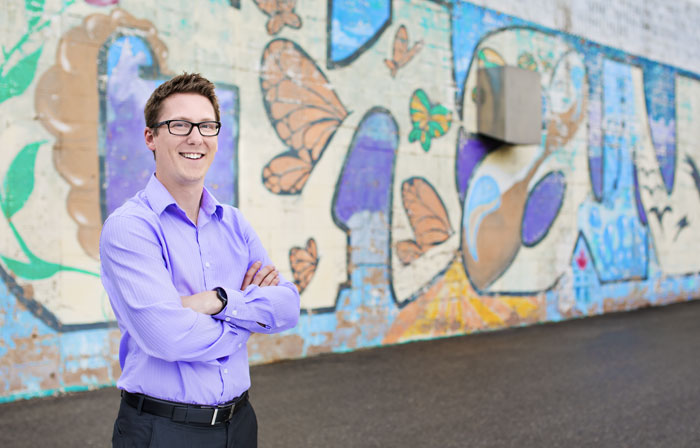 Hirsch is a study centre co-ordinator for the Tomorrow Project, an Alberta-wide longitudinal study based in Calgary and part of the larger Canadian Partnership for Tomorrow Project.

(A longitudinal study is one spanning over a long period of time, sometimes many decades, where researchers observe repeated tests using the same variables each time for the entirety of the study, determining findings for a lifetime or generation.)

The Canadian Partnership for the Tomorrow Project, which started in 2008 as an extension of an earlier provincial study, originally funded by the Alberta Cancer Foundation, follows 50,000 Albertans (and about 300,000 Canadians) between the ages of 35 and 69 who have never had cancer. About once every five years over the course of a half-century, participants fill out a questionnaire and attend an hour-long appointment where project employees collect samples and data on biological, lifestyle and environmental factors.

The study is still in the recruitment phase, with about 33,000 volunteers already on board. The result will be a broad base of data that may provide answers about the causes of cancer and insight on how to prevent it.

“I decided to make a change into health care, after seeing firsthand what cancer did to my grandma,” the Tomorrow Project’s Bryce Hirsch says.

In a province where one in two males and one in three females develops cancer, and one in four people will die from it, there’s no telling the impact that the study could have in the long-term, Hirsch says. In fact, he says the Tomorrow Project could very well become the Framingham Heart Study of cancer research. Before Framingham, an ongoing longitudinal study that started in 1948, little was known about the causes of heart disease. Today, much of what we consider common knowledge about heart disease came from Framingham. “Cancer is so pervasive. It’s something that affects everyone, be it ourselves, a friend of a friend, or a family member. If we can get some more answers as to why this is occurring, hopefully we can prevent it from happening in the future, or at least reduce the incidence rate,” Hirsch says.

Indeed, it was Hirsch’s personal experience that prompted him to make some major changes in his life.

After graduating from the University of Alberta with a bachelor of science degree in psychology, he was working in a Red Deer safe house for kids with substance abuse problems when his grandmother passed away from cancer. “I decided to try to make a change into health care, after seeing first-hand what cancer did to my grandma, in hopes of trying to find some answers,” he says.

Not long after, he was perusing a university alumni job board and came across a project assistant posting for the Tomorrow Project. He saw it as fate, so Hirsch applied and has yet to look back. “I may not see the end results of the study, but this is our legacy to a future generation,” Hirsch says.

Over the phone, Hirsch sounds remarkably cheerful for a man who’s been pulling long hours setting up a new, temporary study centre at the East Calgary Health Centre. This all came as a surprise to him and the million other Calgarians after the city’s devastating June flood. The disaster rendered the project’s permanent base, the Holy Cross Centre in Calgary’s Mission area, inaccessible.

All things considered, the Tomorrow Project was very lucky: the offices were on the building’s seventh floor, and although the examination rooms were on the main floor, the floodwaters never got that high. As a precaution, when the call for evacuation came on a Thursday afternoon, employees brought the freezers containing the Tomorrow Project’s biological samples upstairs. “All of our information is perfectly fine.” Hirsch says. ”Nothing happened to our samples. We’re quite blessed.”

Now, it’s simply a matter of getting back to business as usual in his team’s temporary location until Holy Cross is repaired and ready for their return. For Hirsch, that means, well, a lot of co-ordinating. He started out as a project assistant in January 2010 at the now-defunct Edmonton location, then became a co-ordinator in August 2011, and these days, keeps things running smoothly from the project’s Calgary office.

A major part of his role is setting up mobile study centres, which make it easy for volunteers across Alberta to fully participate in the Tomorrow Project. Teams set up in communities (including, in the past, Fort McMurray, St. Albert, Cold Lake, Hinton and Red Deer) for a week at a time taking blood, physical measurements, and completed questionnaires from participants. For approximately one week each month, Hirsch hits the road on a mobile study to work face-to-face with volunteers.

Hirsch is also heavily involved in the recruitment aspect of the project. He spends a lot of time speaking at lunch-and-learns and other events, spreading the word about the Tomorrow Project and – he hopes – increasing the project’s volunteer base. “The more volunteers we have, the more information we can find out that will help future generations,” he says.

James Whitworth, another study centre co-ordinator, says it’s because of Hirsch that the Tomorrow Project’s volunteers are covering all the bases. “With this study, a stereotypical participant for us tends to be a middle-aged woman. It’s hard to get other demographics. He’s done a lot of presentations and community events, and it’s helped us to engage a much broader segment of the population than we previously had,” Whitworth says.

Whitworth notes that there’s no mistaking Hirsch’s commitment to the project and, as such, he’s become a great role model for everyone involved. “He cares a lot – it’s obvious that the project is important to him. His goals are aligned with the project goals – he goes above and beyond,” Whitworth says. “Other members of our staff grow because of the things he’s done and the actions he’s taken. It’s definitely allowed them to come out of their shells.”

Although the bulk of research results won’t come until the project’s completion, outside studies are already using the Tomorrow Project’s data and generating preliminary findings. As an example, a University of Alberta lab recently compared Tomorrow Project samples with some of their own and found six previously unknown genes that may increase the risk of developing breast cancer. “The power of the Tomorrow Project is endless,” Hirsch says.

Such research reaffirms the importance of the Tomorrow Project for Hirsch, and that long-term legacy he’s helping to leave. “It’ll be very interesting to see what’s going to happen in the next 10, 20, 30, 40, 50 years,” he says. “I can look back and say to my grandchildren, ‘Your grandpa was a part of that project, and what we know today about cancer and other long-term health diseases in large part due to the Tomorrow Project.’ ”

The Tomorrow Project is the largest research study ever undertaken in this province and is supported by Alberta Health Services, the Alberta Cancer Foundation, Alberta Innovates – Health Solutions and the Canadian Partnership Against Cancer. Aside from supporting it since its inception, the Alberta Cancer Foundation has recently committed $2.5 million to the study over the next three years.

Although the primary goal of the study is to find the cause(s) of cancer and determine how to prevent it, the findings can also be used and shared to build knowledge for other long-term health conditions. We’re all connected, and so are our illnesses.

Due to Calgary’s floods, the research centre has relocated to East Calgary Health Centre (4715 – 8 Avenue S.E.) and setting up appointments was temporarily affected. Visit In4tomorrow.ca for the most up-to-date contact information and status of the study.

The website also lists where upcoming Mobile Study Centres will take place and how to join the study.