Sporadic breast cancer accounts for more than 80 per cent of the cases in women who develop the disease and it develops with little or no family history of breast cancer. The high rate of sporadic cancers is frustrating for women and researchers because the disease’s random nature, compared to familial cancers, makes it hard to determine who should be incorporating preventive measures into their lives. 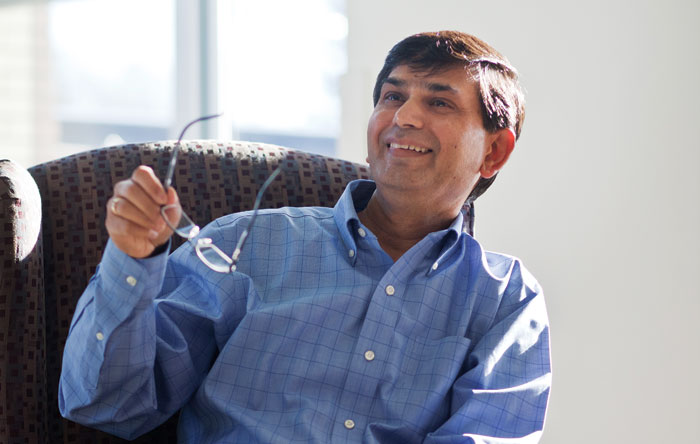 Sambasivarao Damaraju, a University of Alberta professor with the Faculty of Medicine and Dentistry in the Department of Laboratory Medicine & Pathology, and Cross Cancer Institute researcher, recently led a team to a new and exciting discovery about sporadic breast cancer. “We identified a genetic marker on chromosome 4 for women with the disease, which was validated in independent attempts in Alberta populations,” Damaraju says. Genetic markers can be detected in blood and used to determine the risk level an individual has of developing a disease. The team’s discovery was determined by scanning DNA from blood samples of 7,200 women in Alberta – including some who had sporadic breast cancer and some who did not have cancer at all.

This genetic marker has never been associated with familial breast cancer cases, which helps researchers separate the diseases and study their causes independently. “The frequency of this marker occurring was statistically significant,” Damaraju says. “Although 60 to 70 genetic risk factors have been identified for familial breast cancer, we don’t know much about the genetic risk factors for sporadic breast cancer. So this finding is exciting and shows us more research is needed in this area.”

Damaraju says his recent study falls under the Genome Wide Association Studies (GWAS), which is to search the human genome (the entirety of an organism’s hereditary information) for gene variations and irregularities and identify markers that put certain people at risk for breast cancer and others not. He also says GWAS is relatively new on the international research stage considering “the first of such studies were reported in 2007 by a U.K. consortium,” but those studies were in the context of familial breast cancer.

It was Damaraju’s Edmonton-based lab that led the pursuit, and published studies about GWAS for sporadic breast cancer in 2011 in the Journal of Human Genetics and more work, this year, in PLOS ONE journal. Alberta Cancer Foundation donors support the biobank that gave Damaraju and his team access to tumour samples necessary for their research. The team that helped discover the chromosome 4 genetic marker included Dr. John Mackey, co-author of their published studies and medical oncology clinical investigator at the Cross Cancer Institute, as well as PhD student Yadav Sapkota, and other contributions came from previous trainees Malinee Sridharan and Badan S. Sehrawat.

“The purpose of this project is to eventually identify genetic signatures that help screen populations and identify those at risk long before the disease announces its hold on the host,” Damaraju says. “We should not look elsewhere for the world to lead us; we have the ingredients to breed success, and Albertans and the Alberta Cancer Foundation should take pride of what our local researchers have accomplished.”