When Alexandra Lapko enrolled in a breast cancer and exercise research study two years ago, she did so as a healthy volunteer – but also as a cancer veteran. 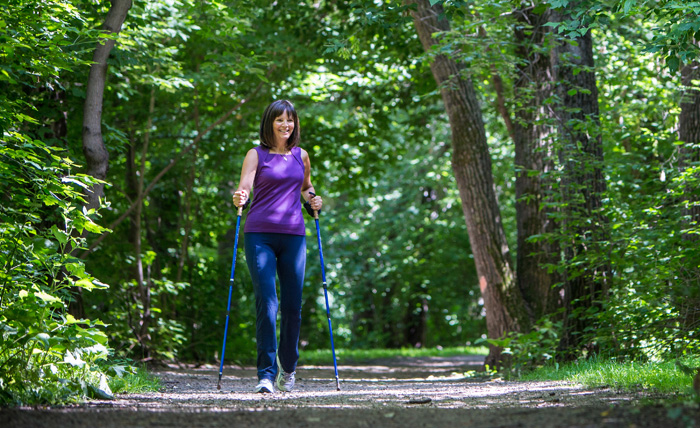 BUSY BODY: Alexandra Lapko altered her waistline and outlook on life after taking part in the BETA Trial.
Photo by Kelly Redinger

For years she’d supported her best friend, Becky, who underwent treatment for Stage 4 breast cancer. “I had the worry, the fear and the concern for Becky’s health as a constant companion in my life,” Lapko says, explaining she’d often accompany her friend to chemotherapy treatments, body scans and various other appointments. She did her best to support her friend in addition to being present for her other life roles – a mother, wife and employee. “My energy was low and my stress was high.”

The BETA Trial gave Alexandra Lapko an opportunity to support her friend and her own health, while giving back to the community through research.

When Lapko spotted a poster advertising a university research program called the BETA Trial that focused on breast cancer and exercise, the timing couldn’t have been better. “I thought the BETA Trial would be a great opportunity to support my friend and my own health, while giving back to the community at large through research,” says Lapko, now 59.

The BETA Trial (Breast Cancer and Exercise Trial in Alberta) began in 2010 and wrapped up in April 2013. The study focuses on how exercise influences the development of breast cancer.

“We understand that physical activity reduces your chances of breast cancer by 25 per cent,” explains the study’s principal investigator Dr. Christine Friedenreich, a senior research scientist in the Department of Population Health Research at Alberta Health Services and a professor at the University of Calgary. She is also the Weekend to End Women’s Cancers Breast Cancer chair.

From a previous research study – the ALPHA Trial (Alberta Physical Activity and Breast Cancer Prevention Trial) – Friedenreich and her co-investigator Dr. Kerry Courneya, a University of Alberta researcher – discovered that post-menopausal women who exercised had reduced levels of certain sex hormones, insulin, body fat and a number of other physiological risk factors (“biomarkers”) for breast cancer. “What we found is that the more women exercised, the more there was a decreased level of the biomarkers,” Friedenreich says, adding that previous research found there is roughly a 25 per cent reduced risk of breast cancer when comparing the most active women to the least active, in these studies.

Funded by the Alberta Cancer Foundation, the BETA Trial examines the exercise-cancer reduction connection further and looks at how the amount of exercise women participate in reduces these biomarkers. The trial involved 400 post-menopausal women in Edmonton and Calgary, between 50 and 74 years of age. Women accepted to the study were healthy, but inactive, and willing to commit to a regular exercise program for a year.

Then they were randomized into two groups: those exercising 300 minutes per week broken into five sessions a week, for 60 minutes each session; and those exercising 150 minutes per week broken down into five sessions a week, for 30 minutes per session. “It was an individualized program for each woman based on her age and physical activity,” explains Friedenreich. Participants could choose almost any kind of aerobic activity, but were asked to have three supervised sessions at the exercise oncology lab run by Courneya at the University of Alberta in Edmonton, or the Westside Recreation Centre in Calgary, per week. Two sessions could be unsupervised (home-based) but participants could do all at the facility if they wanted to. The women’s current level
of physical fitness at baseline was used to individualize their programs.

Lapko was randomly placed in the group that worked out 300 minutes a week (60 minutes for five sessions a week). This was no small feat given her commute to the Edmonton International Airport, where she works as an airline guest services ambassador.

Most of the time, it wasn’t too tricky to squeeze in an hour of physical activity, she says. But it was admittedly harder to stay motivated on -35°C mornings, when working out meant waking at 6 a.m. and driving to the gym in the dark. But even in the dead of winter, Lapko never regretted it: “There wasn’t a day that I didn’t leave [the gym] feeling better than when I first arrived.”

As the study progressed, Lapko found herself losing weight and inches, and improving her cardiovascular fitness drastically. She went from being in the 50th percentile for aerobic activity to being over the 90th percentile, she says, referring to the ideal values of the maximum amount of oxygen her body processed during exercise. While she didn’t stop being tired during the daytime, Lapko says the regular exercise gave her increased stamina. “I actually loved it. I felt it made such a difference to my physical and mental health,” she says.

Unfortunately, during the study, Lapko’s dear friend Becky passed away from breast cancer. But rather than throw her off track, it only solidified her commitment to finishing the program. “The day after Beck died, I went to gym,” Lapko says. “And the day after that and the day after that. It helped me deal with my grief and gave me solace and stress relief.”

In fact, of the 400 women originally enrolled in the BETA Trial, only 14 dropped out. “The retention rate was very high – 96 per cent,” says Friedenreich. So was the adherence to the exercise programs to which participants committed themselves. The study’s flexibility may have played a role.

“We worked with people’s life situations,” Friedenreich says. When participants couldn’t work out with researchers present, they could work out elsewhere. In fact, research assistants helped participants create fitness programs they could follow while on vacation. During the course of the year, study participants were also given incentives to keep them on track, including information packets about exercise, individual support from trainers, gift certificates for running shoes, a running shirt, water bottle and heart-rate monitor.

After collecting plenty of data during the course of the study, including blood samples, CT scans and DXA scans (typically used for osteoporosis diagnosis) from participants, Friedenreich and Courneya are currently in the midst of analyzing the results. The researchers were able to send out the blood samples to their co-investigator in Los Angeles, Friedenreich says. “So the first assays (investigative procedures) are ongoing now.”

However, preliminary findings show the vast majority of women in both groups remained committed to their specific exercise plans during the course of the year and experienced positive changes with their weight and body fat.

Friedenreich won’t hazard a guess as to what the blood results will reveal, but she’s excited about how it will help scientists understand not only the influence of exercise on breast cancer development, but “other cancers that are hormonally mediated,” including colon, endometrial and ovarian cancers. She explains that the biochemical pathways relevant for breast cancer are also relevant to many other types of cancer.

She’s also eager to contribute to a growing body of research examining how exercise can prevent cancer from developing and help cancer patients get well. “It’s a field that’s rapidly expanding and we’ve contributed to it enormously,” Friendenrich says, who has worked with Courneya on numerous studies over the years. “It’s an area that’s under-appreciated by the general public.” Most people are better acquainted with the importance of diet to the development of cancer, probably because researchers have been studying the link between diet and cancer for longer than exercise and cancer.

Lapko believes in the social benefits of cancer research. “It’ll make a difference to all of us,” she says, but she is quick to stress the personal benefits she experienced from participating in the BETA Trial. “It changed me forever. It was wonderful,” she says. As much as she enjoyed the physical benefits, Lapko says the experience showed her that her body was capable of amazing things.

Recently, she did a 40-day yoga challenge at a yoga studio and, while visiting France not long ago, she went paragliding, something Lapko probably wouldn’t have tried before the BETA Trial. “I’m continually looking at life outside the box. It’s changed my attitude toward life.”

A health economist on the cost of care