Q: What is an autoimmune disease and can it be treated?

Dr. Bertus Eksteen, associate professor, department of medicine, division of gastroenterology at the University of Calgary explains that an autoimmune disease is when
your immune system, which typically fights bacteria and viruses, turns against your body and causes damage to some organs or cells.

“Autoimmune disease is probably the biggest thing that we deal with in medicine at present,” Eksteen says. “If one of the cell types in your pancreas is attacked by the immune system, you get insulin dependent diabetes mellitus. Or if some of the cells in your brain get attacked, you get multiple sclerosis. It just depends which cell types get attacked as to which type of autoimmune disease you develop.”

The severity of the effects depends on what cell types are attacked, how crucial those cell types are for the body to survive, how intensely the immune system attacks the cells as well as your genetic makeup. “The majority of genes that determine if you get an autoimmune disease or not are inherited,” Eksteen says.Many autoimmune diseases have correlating tests, such as blood tests or biopsies, that medical professionals can perform to make an accurate diagnosis.

“Unfortunately when you have somebody whose immune system has become very active and now it’s attacking their own body, quite often you can’t get rid of it [the damage] anymore,” Eksteen says, adding that although doctors can’t cure an autoimmune disease completely, they can help control it. “Most of the therapies don’t take it away but suppress it,” he says.

The need to control the ill-functioning immune system is so that it doesn’t cause too much long-term damage to the organ or cells it’s attacking. Eksteen says detecting and treating an autoimmune disease early on helps prevent significant and permanent damage to a person’s body and health.

Q: I was told that my low-platelet results are likely pregnancy-related. I’m not certain what it means if my platelet count doesn’t return back to normal after I have my baby.

Dr. Eksteen says that platelets play an essential role in our blood: they make our blood clot. “If you don’t have platelets, you bleed more easily,” he says.

“In pregnancy you can get low platelets, which sometimes means there’s something wrong with the placenta. It can also be an early sign that there’s a problem with the liver during pregnancy,” he says. The placenta and liver are usually the things that get investigated in detail if there are low platelets during pregnancy, but in most cases the platelet count goes back normal soon after giving birth.

“If it doesn’t go back to normal after pregnancy, you have to think it’s not one of those things related to liver or placenta,” he says. It means there’s something that’s been going on before pregnancy and it is there to stay long-term.

Low platelets occur for a few reasons – one being that you don’t make enough platelets, meaning there’s a problem in your bone marrow. Or, your body makes enough platelets but they’re consumed somewhere in the body. “That can either be that you’ve got an autoimmune disease that kills platelets or it can be you’ve got a big spleen that breaks down more platelets than you can make,” Eksteen says. “It can also be one of a variety of blood-vessel diseases that break up platelets more quickly than you can make them.”

When functioning properly, the body keeps a fine balance of the number of platelets your system makes and how many it consumes. Eksteen says there are about 50 diseases that can affect how many platelets you make and hundreds of diseases that alter how quickly your body consumes them.

It’s usually a haematologist who looks after patients with platelet issues and he or she tests for antibodies – autoimmune diseases that eat up platelets. Typically, a biopsy of the bone marrow is also done to determine if enough platelets are being made. “They’ve got a battery of tests to look for things like a big spleen that eats platelets up or if there are blood vessel problems,” Eksteen says. He adds that it’s important to know if a person has any other illnesses because low platelets will mean different things when paired up with different diseases.

Q: I keep hearing about radon and how it can cause lung cancer. How common is it for people to come into contact with radon and where?

Radon is a radioactive, invisible, odourless and tasteless gas that is created in the environment from the breakdown of uranium in the soil, says Dr. Paul MacEachern, a respirologist and clinical assistant professor at the University of Calgary.

“When radon gas seeps out of the ground and into the outdoor atmosphere it is diluted by the surrounding air so that it is not a danger,” he explains. “When confined to poorly ventilated areas, such as a basement, radon can build up to levels which may become a health risk if a significant amount of time is spent in that environment.”

Radon can seep into homes in many ways – cracks in the foundation, around floor drains or wherever the house contacts soil – and newly built homes are not necessarily safer than older ones. Health Canada currently recommends indoor air levels of radon to be less than 200 becquerels per cubic metre (200Bq/m3).

It’s the uranium in the bedrock that determines the level of radon gas found in your soil. Numbers vary across Canada, but the highest levels found were in Manitoba and New Brunswick. In Alberta, less than seven per cent of homes have radon concentrations above the recommended level.

More information about radon can be found where Leap’s Research Rockstar talks about his studies of this radioactive gas and at healthcanada.gc.ca/radon. 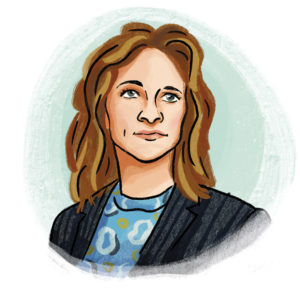 How to Talk to a Colleague With Cancer