Dr. John Mercer is understandably bullish about the most recent of his department’s gleaming new machines. Cutting-edge PET/CT scanners were installed in Edmonton’s Cross Cancer Institute in 2005 and 2012. The machines look obviously clinical and a little futuristic. The scanner comprises two parts. The first – the part that contains the machinery to scan the patient – is shaped like a Lifesaver that’s taller than a man and standing on its edge. The second part is a bed on which the patient lies that moves through the ring in the centre of the scanner.

In preparation for the scan, a patient takes a kind of nuclear medicine called a tracer by intravenous injections. The tracer moves through the body localizing in tissues, allowing the nuclear medicine physician to visualize healthy and diseased tissue. The scans are used mainly to find and monitor cancer, but can be used for other conditions, such as diseases of the brain and circulatory system. Including preparation and scan, the process takes about half an hour.

The presence of the machines means that more patients can be scanned in a shorter time more accurately, significantly reducing wait times for cancer screening, arguably the most stressful days or weeks in a patient’s journey. The new PET/CT machines will process three times as many patients
as conventional scanners. But they bring much more than reduced wait times to Alberta.

The machines are the latest additions to what Mercer calls “a fantastic facility, one that in the last 10 years has become a globally recognized leader in radiopharmaceutical development.” Mercer is the research director of the Edmonton PET Centre. Whereas other facilities might use just one or two tracers, the Edmonton PET Centre at the Cross Cancer Institute maintains a library of tracers, tailored to find and monitor various cancers.

The machines are the latest additions to what Mercer calls “a fantastic facility, one that in the last 10 years has become a globally recognized leader in radiopharmaceutical development.”

“The machines operate in two different modalities,” Mercer says, “taking two different types of images at the same time.” The PET modality (positron emission tomography) looks for a specific tumour. “The problem with PET is that there is no anatomical reference point, so we don’t know where a tumour is exactly,” Mercer says. The CT (computed tomography) is like a three-dimensional X-ray. “It allows us a precise idea of where a tumour is located.” Together, the scans show a transparent, 3-D version of the patient that doctors can manipulate and zoom in on. The tracers light up the tissues doctors are looking for.

Since the PET Centre came online in 2002, Mercer says there have been more than 50 clinical trials in which physicians have use this imaging technology. “The tracers allow us to fine tune our choice of therapy for each patient,” he says. “We are trying to tie ourselves to personalized medicine. Having these instruments here lets us get even closer to that.”

Of course there is a pricetag. At $3 million per machine it’s a significant one.

The Alberta Cancer Foundation has funded these machines through the generous support of its donors. By strategically investing its funds, the foundation provides opportunities for donors to invest in research programs, equipment and patient care.

The Muhlenfelds: Making home a better place
Reinhard Muhlenfeld knows a good opportunity when he sees it. “We came to Canada in 1975,” the 82-year-old businessman says. Originally from Germany, Muhlenfeld had been living for years in England. His expertise brought him to Alberta to build a feed plant in Sexsmith. “It was a two-year project and we didn’t intend to stay,” he recalls. But after that project was over another opportunity came. “We bought a small mill in Barrhead and hired someone to run it,” he says. Other feed mills followed and Reinhard, his wife Elisabeth and their children Sandra, Angela and Peter, sold the house in England and put down roots in Alberta.

Today, with Elisabeth at his side, he is reminiscing from his book-lined office at his home in Edmonton and it’s clear Muhlenfeld knows a good opportunity when he sees it. On one of his regular trips to visit the feed mills, he came across a bag of pet food. “I took a look at this bag, and I saw it was made in the United States,” he says. “It turned out there was no one manufacturing pet food in Alberta.” In 1985, Muhlenfeld set out to change that. Today, Champion Pet Foods makes high-quality protein-rich dog and cat food mainly from locally-sourced ingredients at its two plants in rural Alberta. It markets its product to 40 countries. “We have two production systems and 225 employees,” Muhlenfeld says. “Our son Peter is the chief salesman.” The business has been profitable, and the Muhlenfelds wanted to give back.

“As Reinhard says, we made the money here and it should stay here in Alberta,” says Elisabeth. “We chose to give to hospitals.”

Early in the process, they sat down with Jane Weller from the Alberta Cancer Foundation, who presented some options, among them, the chance to direct funds to a PET/CT scanner. The Muhlenfelds saw this as a good opportunity. They made an initial generous donation and, after a tour of the facility during which they found out what the machine could do, they followed up with a second donation. “They needed some toys to go with it,” Muhlenfeld says.

EECOL Electric: Employees for a better future
EECOL Electric has had a part in powering Canada since 1919. An employee-owned company, EECOL services the electrical material supply requirements of industry. The company boasts large inventories, qualified personnel, and great service. And, like every organization, EECOL has lost valued colleaugues to cancer.

“We are long-time supporters of the Alberta Cancer Foundation,” says Garry Tansem, EECOL’s regional manager for Northern Alberta. “We’ve been looking for more structure and more significant choice when we direct our charitable dollars,” Tansem says. “We wanted to put the funds into the region where we live and work.” To that end, EECOL developed a five-year plan for its corporate donations.

Tansem says that he and others from EECOL consulted Jane Weller of the Alberta Cancer Foundation and explained the kind of projects the company wanted to fund. “We wanted something specific to Northern Alberta,” he says, “and we wanted to help patients today and into the future.” Weller presented a few options and the EECOL team identified the PET/CT scanners as an investment they could get behind. “People from our region, Northern Alberta, usually go to the Cross for cancer diagnosis and treatment. We saw the scanner as significantly impacting care in our area.”

In 1994, after a lifetime of profitable work for PCL Construction Group, Bob Stollery (who died in 2007) along with his wife Shirley, already generous philanthropists, wanted to create a legacy that would last. They were the driving force behind the Stollery Children’s Hospital in Edmonton and the wide-reaching Stollery Charitable Foundation. Like the Muhlenfelds, they wanted to give back to the community that had afforded them success.

“The Stollery Charitable Foundation is a private, endowed, family foundation,” explains executive director Scott Graham. He says that the foundation’s mandate includes the goal of improving the health of the community in cooperation with other funders. “We heard about the PET/CT scanners in an early inquiry from the Alberta Cancer Foundation in 2008. We discussed them with Dr. Tony Field, and he made a compelling case for how they would help the community.” Field explained how the scanners would reduce wait times and improve the detection and monitoring of cancer. His enthusiasm and clear explanations captured the interest of Graham and Jeff Bryson, director of granting at the Stollery Charitable Foundation.

“We took Dr. Field’s information to the family to see what we might do to help.” Graham adds that part of the attraction was the Alberta Cancer Foundation’s reputation as an organization that uses donor dollars effectively. “We knew that we’d be able to paint with a wide brush,” Graham says, “that the scanners would help a large swath of people in the community.” 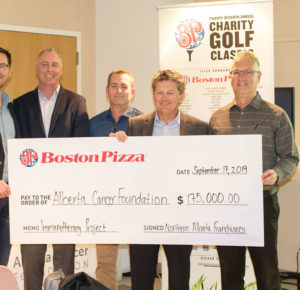 Coming Together for the Cause