Two years ago, Al Monaco, 52, was not much of a bike rider. In fact, he didn’t even like cycling. But a fundraising opportunity changed everything and today, the incoming president of Calgary-based energy giant Enbridge Inc. (succeeding Pat Daniel this fall) loves to hop on his dependable white Cannondale bicycle and go for a ride.

When he went on a cruise last year, he attended a spin class and cycled on a stationary bike everyday of his vacation. And for three months this year, Monaco squeezed in weekly 75-kilometre training rides and trips to the gym, making time in his busy schedule to cycle from Calgary to Bragg Creek alongside other Enbridge employees. It was all in preparation for a two-day cycling event benefiting the Alberta Cancer Foundation. Participating in the Enbridge Ride to Conquer Cancer, which takes place in Alberta every June, has been an opportunity for Monaco to embrace a new sport, meet new employees, raise a lot of money and motivate others to do the same.

Monaco got involved because a team leader suggested that his participation could boost the Enbridge team’s efforts to raise money for the cause. In an instant, Monaco joined a sport he claims he didn’t like, purchased a bicycle, and committed to training rides and the two-day event. Like many Albertans, Monaco has been touched by cancer, having lost two uncles to the disease. (His father also faced cancer years before he died of other causes.) His family’s experiences made the decision to participate an easy one. Over the last two years, Monaco has personally raised more than $75,000 for the fundraiser.

Balancing full-day training rides with his busy professional role was tough, but also important, Monaco says. “It is a balance and it comes down to organizing your time,” he says. “This is such a significant event for our company. You make time for it.”

The two-day, 200-kilometre cycling event takes place every year in Alberta, Ontario, Quebec and British Columbia and Monaco says it’s an important fundraiser for each province’s cancer foundation. “It really makes a huge impact. We’re raising major dollars here. Last year, across the country, this ride brought in $44 million,” he says. “And it looks like this year, we’re on track to meet that number.” Monaco is one of 328 Enbridge employees from across Canada who participated in one of the four challenging 2012 Enbridge Ride to Conquer Cancer events. “It’s tough rolling through the rain and the wind and the hills, but on the other hand, it’s a small price to pay to ensure that we’re helping find the cure,” he says.

While some company sponsorships typically involve little hands-on work, Monaco says involvement with the Enbridge Ride to Conquer Cancer allows fellow employees to participate, volunteer and raise funds. “This (sponsorship) is different because we – our employees and our leadership – are involved in it right from square one,” he says. “We’re involved right across the country.”

BUSY TIMES: Training rides were hard for Monaco to fit in his schedule, but necessary.
Photo by Ewan Nicholson

Devon Smibert, a systems architect at Enbridge and event participant in all four provinces this year, says cycling alongside Monaco at the Calgary race demonstrated the strong leadership skills the soon-to-be company president possesses. “It’s very inspiring to see that our man at the top is living the values of the company,” Smibert says. “He was out there on a bunch of the training rides with us.”

Smibert, an avid cyclist, helped co-ordinate weekly team training rides for three months preceding the event. The training rides, and the big ride itself, were opportunities for Smibert to raise funds for a cause close to his heart – his wife was diagnosed with cancer last January – and to participate in an activity he likes.

And Smibert has come to know his company a little better. “I’ve been able to meet people across the organization that I would never come across in my normal job,” Smibert says.
Monaco agrees that there is an extra business benefit to Enbridge’s participation: the training and race itself are positive team-building experiences. “I really enjoy the training rides, especially because it gets you out with employees and you’re all focused on the same goal,” Monaco says. “It’s not a goal that we normally associate our interaction with. Normally we’re talking about developing pipelines or the financial aspects of our business. This is something different and I think it’s fun to interact with employees on a different level, on a community level.”

By saddling up on his Cannondale, Monaco’s role as a cancer fundraiser has allowed him to set a positive and progressive leadership example and, as a bonus, to discover a new sport. The process has changed his low opinion of cycling. “It’s been a lot of fun. I enjoy riding now. It’s is a good sport for people in middle-age,” Monaco says. “I think it’s the new golf.” 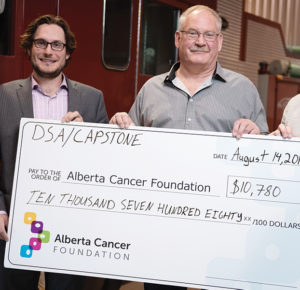 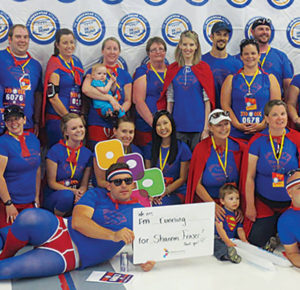