There was a time when the Inuit were arguably the fittest people on earth. A great diet of country food from the land and sea, and a lifestyle that entailed lots – LOTS – of walking contributed to their well-being. In the Kitikmeot (central Arctic area) modern convenience has eroded traditional healthy habits. As in the south, it’s taking a toll on people’s health.

“It seems like so many people are getting cancer,” says Cambridge Bay resident Jeannie Ehaloak. In her mid-40s, she had already lost two sisters to cancer and she wanted to take action. “I believe that living a healthy lifestyle and eating right will help Nunavummiut live longer,” she says.

She wasn’t the only one thinking that way. In Iqaluit, her sister Edna Elias, commissioner of Nunavut, had been making her own strides to better fitness – she had lost more than 60 pounds.

To reach the goals of a higher level of health and fitness, becoming an example for others and raising money for the Alberta Cancer Foundation (cancer patients from the Kitikmeot typically get treatment at the Cross Cancer Institute), the two sisters, along with three other women from Nunavut and one from Calgary, plan to take a walk. Their walk will take place in May and extends from Umingmaktuuq to Cambridge Bay, a journey of seven or eight days, walking about a marathon’s distance (42 kilometres) per day. They’ll have a resupply team on snowmobiles and they’ll camp along the way.

As if the walk weren’t enough, Elahoak adds: “If there’s a storm, we’ll wait it out and somebody will bring a gun in case of bears.”

The group, Women in Action, is raising funds for the Alberta Cancer Foundation. 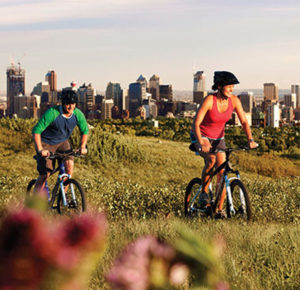 Easy-to-access Alberta trails, made for walking