Early Memories: Paula Jones (top) in 1995 before her thyroid cancer diagnosis and (bottom) at age one, during treatment for neuroblastoma. “I never felt like that kid who had cancer,” Jones says.

Paula Jones doesn’t remember the first time she had cancer. She knows from her family that at age one she was diagnosed with neuroblastoma. “My brother and sister are 11 and 13 years older than me, so first they got this little sister that no one expected and then they had to deal with going to the hospital every day,” Jones says. The tumour, located around her spine, was successfully treated with chemotherapy, radiation and surgery.

Jones does remember her second diagnosis, as a teenager, of thyroid cancer and isn’t certain if it was the result of treatment for her first cancer. “In my mind it couldn’t happen again,” Jones says, crediting the combination of a teenager’s attitude of invincibility with knowing she had overcome the disease once before.

To treat her second cancer, in Grade 10 Jones had a thyroidectomy, followed by radioactive iodine treatments. Now 32 and working as a project co-ordinator for Alberta Health Services and a provisionally registered psychologist, she remains cancer-free. “Cancer did shape my family and who we are, but my family also normalized it for me,” Jones says. “I never felt like that kid who had cancer.” Today, long-term effects of her childhood cancers remain, along with the lingering possibility of recurrance.

The multiple surgeries left Jones without the proper amount of supporting back tissue, which causes her spine to curve and gives her back pain. There are other effects, too, though Jones says it’s hard to know what’s “biologically who you are and what’s an after-effect of treatment.” When she recently researched effects of cancer treatment, Jones was shocked to read about foggy memory and fatigue. “Everyone always jokes with me because if I stay up late three nights in a row, I’m just wiped,” she says. She hadn’t attributed her tiredness to cancer treatment.

It’s a similar story for other adult survivors of childhood cancer, many of whom have later health issues as a result of the cancer or the treatment. Late effects are varied and include infertility, physical damage to organs, secondary cancers, delayed puberty and learning disabilities.

The most common late effects include complications with hormone levels and metabolic function, according to information released in 2008 by Statistics Canada, the Public Health Agency of Canada and other partners. The same report estimated the five-year survival rate for all childhood cancers to be 82 per cent, which is an 11-per-cent increase compared to 15 years ago.

In it together: Paula Jones, in the hospital (top) receiving treatment, is thankful for her family’s support throughout her cancer journey. She’s pictured above (second from left) with her siblings Andrea and Dean and parents Sheila and Trevor.

While more children surviving cancer is welcome news, there’s little research on the long-term effects of treatments. In addition to health problems, there’s also a challenge in approach. Depending on their age at diagnosis, childhood cancer survivors are accustomed to a parent keeping track of details of their diagnosis and treatment. It can be difficult for them to take charge and know where to go for more information or who to go to for medical problems related to their childhood cancer.

Dr. Janine Giese-Davis, director of CancerBridges, says that adult survivors of childhood cancer can fall into a gap, as they’re no longer treated at children’s hospitals but by oncologists more familiar with adult cancers.

“We are interested in understanding the needs of adult survivors of childhood cancers and what kind of situation might be better for them,” Giese-Davis says. To that end, a team at CancerBridges, an organization that researches and delivers evidence-based survivorship care, is assessing the unmet needs of survivors of childhood cancer, using a survey that can be filled out online or on paper.
Giese-Davis, along with research co-ordinator Jennifer McCormick and psychology honours student Joanne Park, are conducting the survey that will wrap up this summer. “We’ve already had responses from all over the province, including small towns where people may have even fewer opportunities to get the type of care that they need,” McCormick says.

The group is also surveying caregivers, and wants to hear from people who may have no unmet needs. “We need that information as much as we need to know that there are particular needs,” Giese-Davis says. Once all the data have been collected, the team will look at how the health system can handle the identified issues.

“We communicate with survivors in Alberta and listen to them and help facilitate in whatever way we can,” Giese-Davis says, “to allow better lives for them.” The results of the survey may also lead to collaboration with children’s hospitals where the cancer diagnosis first occurs, to make a difference to survivorship later.

For Jones, cancer was part of her childhood and its effects still impact her life, but she’s not about to let that limit her. “I think my family didn’t give in to their fears and anxieties, so that it wouldn’t change my development or who I was growing up,” she says. “If anything, it really gave me a sense of ‘I can do what I want and be who I want.’ Experiences don’t necessarily define you, but they shape you.”

“If you’re an adult survivor of childhood cancer, we are trying to reach you,” says Dr. Janine Giese-Davis, director of CancerBridges. While a letter of invitation has been sent to all survivors listed on the cancer registry, if you haven’t received one, you are still asked to participate. Contact Jennifer McCormick, research co-ordinator, at 403-698-8148 or Jennifer.McCormick@albertahealthservices.ca or learn more at www.cancerbridges.ca/unmetneeds. CancerBridges is also surveying the unmet needs of all survivors of lymphoma cancer (whether they were diagnosed in childhood or adulthood) and adult survivors of cancer who are more than five years post diagnosis. 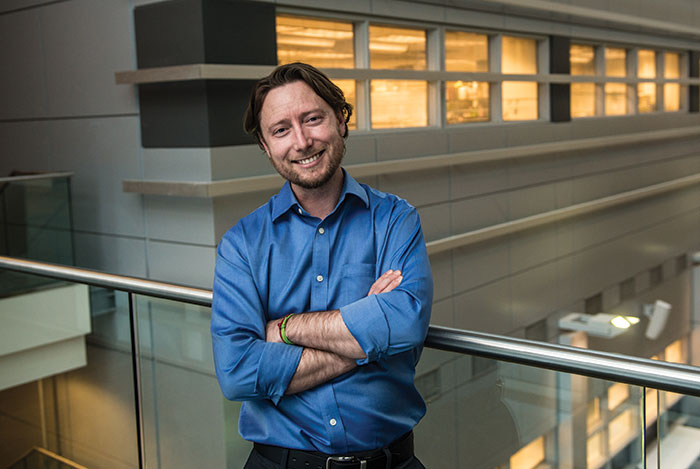