This spring saw Peter and Gwen Fargey of ION Print Solutions on an extended golf holiday in Arizona, and there was no better time to be away, weather-wise. Thankfully, the plan they had hatched and set in motion with the Alberta Cancer Foundation was ticking along quite nicely without them, doubling the impact of every donation sent to the foundation.

Now in its second year, the plan had its genesis year before last, with Peter’s persistent gut ache. It seemed to come and go, but it wasn’t really tied to anything he was eating or doing. “I took Tylenol for it,” says Peter, “but it always came back.” He went to the doctor and eventually, Peter, then 67, was booked for a gastroscopy, a test in which doctors threaded a tiny camera down his throat to get a look at what was going on inside. The test revealed a rare duodenal cancer.

The only treatment available was a surgery called a Whipple, which – in Peter’s case – involved removal of the bile duct, the duodenum and half of his pancreas. A serious infection developed and he had to undergo two more surgeries with the eventual removal of the remaining part of his pancreas and his spleen. When he had recovered sufficiently, he started 12 months of chemotherapy treatments.

Complications, including a serious blood clot, meant that doctors had to change his drug regimen a couple of times. He finally finished treatment in October 2010 and set about gaining his strength back.

That’s why this spring’s golf trip to Arizona was especially welcome for the couple.

“Peter received wonderful care and attention at the Cross Cancer Institute in Edmonton,” says his wife, Gwen. “But every patient is different and his cancer was rare. If you don’t do the research you don’t know how to treat these things.” It seemed natural that the pair would want to support the work of Peter’s oncologist, Dr. Michael Sawyer, and other researchers in the field.

While Peter was being treated, his business partner Craig McEwen hit upon the idea of supporting cancer research with a matching donation program. The company planned an open house to showcase some new equipment in the shop – ION is a leading printer in the province. Customers, business people and many friends were invited. McEwen and Gwen piggybacked the fundraiser on the open house and invited Peter’s oncologist to give a talk about his research. There was a silent auction in which ION’s customers and suppliers donated auction items, and proceeds from the event went to the Alberta Cancer Foundation. “At least that’s what I heard happened,” Peter says with a laugh. He was busy with the task of dealing with cancer treatment. ION also launched a matching donation campaign in conjunction with the foundation. Earning more than $350,000, it was one of the most successful summer campaigns to date. So successful that the company is repeating the campaign this year.

Long-time business people, the Fargeys and McEwen know the value of investment, and they chose to invest in the Alberta Cancer Foundation. With their sponsorship, donations to the foundation go twice as far. So people or businesses who donate to the fund before July 22 will see their donation matched by ION Print Solutions, up to $50,000. Money raised will go to research, patient care, and prevention and screening programs. Both Peter and Gwen Fargey know how important research is to health-care professionals when they’re designing treatment plans for each patient.

Today, Peter is cancer-free, but the surgery had consequences. “I became an instant diabetic,” he says. “I take insulin shots four times a day – but we’re managing it just fine.” Peter and Gwen are semi-retired, spending winters in Arizona and as much time as they can with their three adult children (and their spouses) and five (soon six) grandchildren. The family business, ION Print Solutions, is serving not just the printing needs but also the health needs of Albertans like Peter who want a cancer-free future.

The campaign has been a huge success for the Alberta Cancer Foundation. “It’s very gratifying,” Gwen says, “to have Peter’s name associated with this campaign.”

Visit albertacancer.ca before July 22 to read more about Peter Fargey and make a donation that doubles the impact your money would otherwise make. This program extends the reach of a “regular” donation, meaning that a $20 donation today will see $40 going to the Alberta Cancer Foundation. You’ll feel twice as good about yourself afterwards. 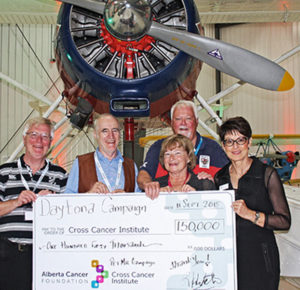