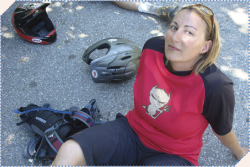 Diagnosed in November 2004 with Hodgkin’s lymphoma, Shannan Frey recently celebrated five years of being cancer-free. But she and her family didn’t celebrate by taking a relaxing vacation. Instead, Frey began thinking about how she could contribute to cancer research.

Her conclusion? Frey, an avid sports enthusiast, would participate in the 2010 Enbridge Ride to Conquer Cancer in support of the Alberta Cancer Foundation on June 26 and 27. But to participate, Frey needed to raise a minimum of $2,500. “I registered for the race in March, which gave me four months to raise the money. I’ve concentrated on smaller individual donations through friends and family. They’ve been along for the ride, because they’ve been involved since my diagnosis.”

When donations from the obvious sources began to taper, Frey got creative: she and her husband, Jesse, hosted a barbeque and silent auction at their home. Despite inclement weather, the party raised more than $800 towards her ride. “I approached people I knew who had a skill or talent that would be of interest to my attendees,” she says about soliciting silent auction items, which included a homemade quilt, art and a bicycle tune-up.

Frey also approached local business, like her grocery store, to request donations for the event. “I wrote a letter, explaining what I was doing, and asking for a donation or a discount,” says Frey. It also helps, she says, that she approached places where she is a loyal customer, so that store management can see the community involvement.

Frey exceeded her goal of $2,500 and raised more than $3,600. When it comes to fundraising, says Frey, “It has to be for something that’s important to you. And it’s only going to be as much of a challenge as you make it.”

Michael Czaja’s life over the last year reads like a series of unrelated incidents that have converged for a greater cause.

Michael, 18, has been an avid go-kart and legends car racer for almost a decade. Legends car racing involves a scale replica of an early model car – in Czaja’s case, a 1934 Ford. He decided on a whim earlier this spring to design a car prototype and he coloured it pink as a joke. When he posted it online, his friends loved it and he started thinking about Nascar charity cars and how other racers can use their love of racing to raise money.

“In 2009, we lost a close family friend to cancer and it hit me really hard,” says Michael. “I also have an aunt who beat cancer and an uncle and grandfather who died of cancer.” Michael knew that using his car to fundraise for cancer research was a perfect fit.

While he was pondering his options, his father, Ed, mentioned Michael’s plans to a family friend, Terry Mudryk. Terry’s son, Bryan Mudryk, had cancer when he was 20 and now organizes and hosts an annual golf tournament in Boyle, Alta. to raise money for the Alberta Cancer Foundation in support of the Cross Cancer Institute. Terry suggested Michael showcase his car at the first hole of the Bryan Mudryk Golf Classic. But, Michael already had a race scheduled that weekend and he needed his car. However, Michael decided that he’d use his race on the weekend of June 19 to collect pledges for the golf tournament, hopefully raising $25,000.

As it turned out, the race Michael was scheduled to run on the weekend of the golf tournament – the one he choose to use to fundraise – was the Froster 50 in Saskatoon, the same place Michael’s car had malfunctioned the year before in a frightening crash.

At that race in 2009, the accelerator stuck on Michael’s car while he was warming it up and he “went full throttle into the wall,” in a car that reaches top speeds of 160 kilometres per hour. Wearing only his helmet, shorts and a T-shirt, Michael was unprepared for those speeds, or the crash that cracked the concrete wall on impact. He walked away from the crash with barely a scratch. His car wasn’t so lucky. Michael not only managed to repair the vehicle, he raced it. Reconstructed “with duct tape,” the car held together long enough for Michael to not only finish, but also place, earning a top-15 spot.

“It’s ironic to be going back to the spot of that crash, but in an entirely different capacity,” says Michael’s father. “His guardian angel looked after him that day, and his being able to go back this year, under these circumstances, is a reward.”

Unlike the Nascar racers whose charity cars are based on corporate sponsorship, Michael isn’t ready to quit his day job. He is in Grade 12 at Bellerose Composite High School in St. Albert and his decision to attempt to raise $25,000 for the golf classic is, according to his high school principal, in keeping with his character. “When I found out about Mike’s fundraising, it didn’t really surprise me,” says George Mentz. “He understands the big idea, that individuals can implement big changes. He, like other kids, isn’t limited by what he can’t do; he has a talent and a passion. To him, raising money through racing was a natural fit. Knowing his energy, I knew it would be a success.”

On May 12, Michael launched his fundraising campaign at his high school, which is also the location of the annual bikeathon he has participated in for the last three years. The 48-hour event has raised more than $250,000 for cancer research in the last three years. “I have a supportive environment, both at home and at school,” says Michael, who adds that being a student at Bellerose has helped him understand that “someone my age can still make a difference.”

Michael says he was inspired to help raise money for the Bryan Mudryk Golf Classic because he, like so many others, experienced the loss of a family member to cancer: his maternal grandfather died of cancer while his mother was pregnant with him. “I never met him, but I was named after him,” says Michael.

When the pieces fell into place earlier this year, Michael says that, “I knew it was time for me to do something. This is a memorial to everyone we’ve lost.”