Bryan has been an avid curler his entire life.

At the age of 20, he qualified for the junior provincials, in what would be his last year of eligibility. Unfortunately, his relapse came just before the tournament and it looked as though Bryan might not be able to compete.

He was about to enter a long, painful treatment process that would leave him in isolation for more than a month.

Determined, Bryan showed up at the tournament while taking pills for chemotherapy, and with a Broviac tube in his chest. Shortly, the tube would be used to pump powerful chemotherapy medication into Bryan’s veins. At the tournament, it was taped down and hidden under his shirt, so few people knew about his condition.

“We didn’t win a game,” Bryan says. But he has no regrets. At the tournament, he competed against both Marc Kennedy and Carter Rycroft, who went on to be among the best curlers in the world.

More than a decade later, as TSN’s curling broadcaster, Bryan called matches at the Vancouver Olympics and was watching as Kennedy won the gold. Bryan says it was the highlight of his career, so far.

Lying in isolation at the Cross Cancer Institute in Edmonton for more than a month, the 20-year-old clung to life as the treatment for his Hodgkin’s Lymphoma nearly killed him.

“It hurt to chew. It hurt to move in bed slightly,” the Boyle, Alta. native recalls of those terrible days more than a decade ago. “I couldn’t walk to the washroom. I had a nose bleed for 14 hours one day.”

Stem cells were removed by taking bone marrow from his spine, eliminating his immune system, as he underwent seven days of chemotherapy at a time, in hopes of shrinking a growing tumor behind his lungs. During that time, a simple cold could have killed him. The few visitors allowed in wore masks to contain common germs. His 6 foot 1 inch frame was diminished from 205 pounds to 139 pounds. Dull daylight, sneaking through a window from the Edmonton winter, stung his eyes.

In the three years Bryan grappled with cancer, these were the darkest days. “It was horrible. But it can’t help but change you. I learned a lot of life lessons in those 40-some days, I’ll tell you that.”

It was two years earlier, in 1998, when Bryan discovered the malignant lump in his neck. A biopsy revealed another tumor behind his lungs. The doctors confirmed that it was Hodgkin’s – a type of cancer that starts in the white blood cells and can spread to other parts of the body.

At the time, Bryan was set to begin a radio and television program at the Northern Alberta Institute of Technology (NAIT), pursuing his dream of becoming a sports broadcaster. Bryan started volunteering at Shaw Television in Edmonton when he was just 16, making the trip from his hometown of 800 people every week. Unable to attend registration, but unwilling to give up his spot in the program, Bryan sent his father to orientation.

Bob Mudryk, a high school principal in Boyle, sat in a classroom filled with teenagers and raised his hand when Bryan’s name was called. Bob didn’t think much of it when the instructors started laughing. “They thought I was kind of an old fart to be registering in art and television,” Bob laughs.

Bryan managed to attend classes at NAIT that year, as doctors at the Cross Cancer Institute successfully contained the cancer, shrinking the tumor through chemotherapy. However, its perilous location in Bryan’s body meant the tumor could not be removed.

Bryan’s humility, eagerness, and talent stood out to instructor Chris Durham that year.

“Initially I didn’t realize he was sick,” Durham says. “He seemed to have boundless energy, and to think that he would be felled by an illness at his age was just shocking.”

Bryan excelled through the program, landing his first job as a weatherman at CKSA in Lloydminster, right out of school. A year after being diagnosed everything was going well, it seemed.

Then, a year later and five days before Christmas in 1999, Bryan had a cold he couldn’t get rid of. And just as he was about to go on air for the 6 o’clock news, Bryan’s doctor called. “Your cancer is back. We need you back in.”

He read the weather that night, keeping the news to himself. Then Bryan went home and sat in the dark, alone, for five hours. “That was the first time I was scared. Because I knew what I had gone through, and it was obviously going to be a lot worse now.”

March 2000 was the worst month of Terry Mudryk’s life.

As her son began the painful treatments – the stem cell transplant, the chemo, the trial drugs, the isolation – she sat beside him, clinging to her faith. Making the nearly two-hour trip from Boyle to Edmonton, she put her life on hold for Bryan – spending six days a week with him. The nights were sleepless.

Bob would stay with Bryan on Fridays, as Terry went home to take care of her business in Boyle. She’d be back by evening, with a friend driving her as she caught sleep for the first two contiguous hours of the week. As she sat by her son, Terry played tapes of his work at the TV station. She read him her favourite bible verses. She helped carry him when he couldn’t walk.

And one snowy day, perhaps near the time that Bryan temporarily lost hope, she looked out the window and prayed a mother’s plea. “You know God, I know that you can take him from me – but I don’t want you to,” she said. So, Terry and Bob stood by their son, unable to stop his physical suffering, but carrying his spirit the best they could.

“There’s no way I would have made it through without both of them,” Bryan says.

Bryan’s only sibling, Marty, four years older, describes those days as “devastating.” He watched as his younger brother was brought to within an inch of his death. And then he watched him rise again.

After the intensive treatment, Bryan’s health rapidly improved. Eventually he was well enough to leave the Cross Cancer Institute – a place he credits with saving his life.

“I just can’t say enough about the nurses and the doctors at the Cross Cancer Institute,” he says. “They are phenomenal, phenomenal people. They see families at their absolute lowest.”

By 2003, Bryan was cancer-free and working for CTV Edmonton. Feeling a great debt to the Cross Cancer Institute, and knowing that other families were going through the same terrible experience, he decided to start a golf tournament fundraiser for the Alberta Cancer Foundation in his hometown. With just a few participants, the first tournament in Boyle managed to raise almost $30,000. Since then, the Bryan Mudryk Golf Classic has taken off.

Terry works all year to make the tournament happen. She oversees around 50 volunteers for the annual event. A couple years ago, she started a paddle boat race to help raise money. Last year it brought in $25,000. Marty shaved his head to raise funds in the second year of his brother’s tournament. For the past four years, he has organized a sponsored bike ride from Edmonton to Boyle on the weekend of the tournament. Last year it raised $15,000.

In seven years, the tournament has raised more than $400,000 for the Alberta Cancer Foundation in support of the Cross Cancer Institute. That money has helped the institute purchase many innovative technologies, including cutting-edge chemotherapy drugs, an electron microscope and an image-guided radioactive therapy program.

“It truly has been amazing to see someone as young as Bryan step forward and dedicate so much effort into giving back,” says Bobbi Wolbeck, a development officer with the Alberta Cancer Foundation who has worked closely with Bryan. “He has pulled in his family, his friends, his entire network of people around him to stand behind his cause – to stand behind what’s allowed him to be here today.”

Last year, Bryan started a scholarship for young people in post-secondary education who are being treated for cancer. Terry heads a selection committee that received more than 80 letters from students in need of the $1,000 scholarship. Overwhelmed by the need, they decided to hand out three awards instead of one. This year, they’ll do the same.

“We’re very proud to be helping young people out,” says Bryan. “My family and I are having an awesome time doing it, and it obviously we’ve raised a lot of money, and it feels great to be able to give back.” 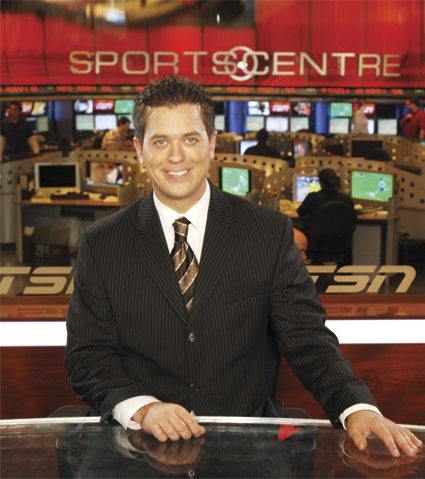 ANCHORMAN: At 27, Bryan Mudryk became one of the youngest hosts TSN ever hired.

After surviving cancer, Bryan says he became more driven than ever to make the most of his dreams.

“Those were the times that drove me, when I was healthy, to enjoy every day, to embrace what you have and to work really hard,” he says. “I was really aggressive with my career after that – because you’re not promised tomorrow, and I learned that the hard way.”

In 2006, after successful stints at CTV and A-Channel in Edmonton, Bryan got the call that he dreamed about. A couple months earlier he had interviewed for a job with TSN as a national sports broadcaster. He hadn’t heard back and thought he missed the opportunity.

But finally the phone rang. At 27 years old, Bryan became one of the youngest anchors the network has ever hired. Today, at 31, you can find him as the host of SportsCentre, and calling curling across the nation.

“I think his cancer scare did affect him,” says Mark Milliere, vice-president of production at TSN, and the man who hired Bryan. “He looked at it as ‘I know what I want to do with my life,’ and it emboldened him to go after it and get it.”

After cancer almost took his life, it drove Byran Mudryk to find his dream. “I’m living it,” he says.

A departure from convention is worth a look