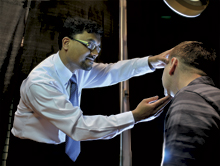 In addition to providing emotional support for fellow melanoma patients, members of the Alberta Society of Melanoma donate time to host skin cancer awareness clinics. In this picture, Dr. Muba Taher checks out a patient at a clinic held in the Edmonton City Centre Mall. Passersby could get their moles examined and book appointments for further consultation, if necessary. For more information about the society, go to www.melanoma.ca. 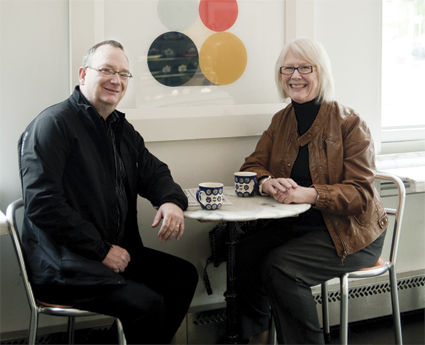 George Owttrim has one word to describe the effect melanoma has on patients: “devastating.” Owttrim knows this first-hand. In 1998, he was diagnosed with melanoma, the aggressive form of skin cancer that commonly enters the blood stream and spreads to other organs in the body.

Shortly after he was diagnosed, Owttrim, a biological sciences professor at the University of Alberta, did what any scientist would do: he started researching.

In this case, he shifted his focus from plant RNA and started looking for support groups. His dermatologist recommended one: the Alberta Society of Melanoma.

Today, Owttrim is cancer-free and is the president of the society. Once a month, he joins with other melanoma patients, past and present, to share a cup of coffee and to talk about his experiences with the disease. “It’s extremely important to be able to talk to others who have already gone through treatment, for what to expect,” Owttrim says.

The society has been offering support to melanoma patients and their families since 1995. All members are volunteers and former or current patients. This includes Tanny Nadon, the group’s secretary treasurer who found the Alberta Society of Melanoma when she was diagnosed in the same year as Owttrim.

While the two other forms of skin cancer, basal cell carcinoma and squamous cell carcinoma, are more common and can be treated by simply removing a cancerous mole and some of the surrounding tissue, melanoma is often fatal, as it is more likely to spread to other parts of the body. Because of its aggressive nature melanoma patients, including Nadon and Owttrim, may require more intense treatment. This can include surgery and chemotherapy.

Owttrim explains that treatment for melanoma patients at more advanced stages can include chemotherapy every second day for a year. The chemotherapy itself can be physically and mentally debilitating for the patient, and is tough on their families, too. Dacarbazine (DTLC), the only chemotherapy drug currently available to treat melanoma, is notoriously difficult to take. DTLC side effects are toxic and the drug causes loss of appetite, nausea and vomiting in most patients, along with flu-like fever and body aches in some patients, as well. “Melanoma is a sort of off-the-radar cancer. It’s an extremely devastating cancer and often found too late,” says Owttrim. “Once you’re diagnosed, the treatment options are very limited.”

While around 90 per cent of melanoma can be cured if caught early enough, the physical, emotional and financial toll it takes on a patient can be traumatic. Through all this, the melanoma society is there to provide support. The monetary blows that come along with being sick can hit patients, and their families, hard. “Financially, it’s devastating for families.

The person cannot work,” says Nadon. In the past, the society has provided monetary support for group members struggling to pay their treatment bills, or it has found someone to clean a patient’s house or to bring them food. “Patients know they’re not alone going through this and we care about them,” Nadon says. “You really need that support.”

In addition to the basic emotional support, both Owttrim and Nadon hope their involvement with the Alberta Society of Melanoma will raise the profile of a type of cancer that isn’t all that common.
“There isn’t the public support for patients,” says Owttrim, adding that the small number of melanoma patients means less funding for research and drug development. “It’s still one of the [cancers] that doesn’t have a lot of money going into research,” says Nadon.

In Alberta, this is changing thanks to the Alberta Cancer Foundation’s Mary Johnston Professorship in Melanoma Research at the Cross Cancer Institute, currently held by Dr. Alan Underhill. The research chair is funded by a donation from the Johnston family, the Alberta government and the Alberta Cancer Foundation and is named for a former member of the Alberta Society of Melanoma. Mary Johnston lived with melanoma for 22 years before the disease finally took her life in 2004. She was instrumental in pushing for more melanoma research.

This dedication to Alberta-based research, along with the group support, is enough to foster hope. For new members, it’s vital to meet others who have faced melanoma. “We have some members who are Stage 4 survivors,” says Owttrim. Usually, by Stage 4, melanoma has progressed to other parts of the body and few treatment options remain. “I think it’s very important for new people to meet survivors, but also survivors that are at a higher stage than they are,” he says.

A big part of the support group also focuses on education. At the society’s monthly coffee nights, former and current patients, along with their family and friends, gather and listen to a medical speaker, along with a patient speaker. “So, you hear from the patient speaker and how they’re coping and it makes you know you weren’t alone,” says Nadon. “I’m sure it takes place in other cancers as well, that perhaps you feel like you’re the only one.”

The group also supports patients dealing with emotional factors, including depression, social withdrawal, substance abuse and the daily stress that comes with a diagnosis. This support comes through different forms of therapy that aid in improving coping and communication skills.

As health conditions change, for better or for worse, members of the Alberta Society of Melanoma tend to fluctuate in numbers per meeting. “Unfortunately, with our disease, a lot of people are no longer with us that originally started the society,” says Owttrim. “A lot of members remain active for a year or maybe two, but then they believe the cancer is gone and, for obvious reasons, they want to believe that. Then they fall out of the group.”

Nadon says that there are always at least a handful of society members who are dedicated to not only supporting each other, but also to doing their best to promote prevention. The group often takes part in health and wellness fairs, specifically events in Edmonton, where members encourage others to take precautions in the sun and to get suspicious moles checked early, to avoid what can be a truly devastating disease.